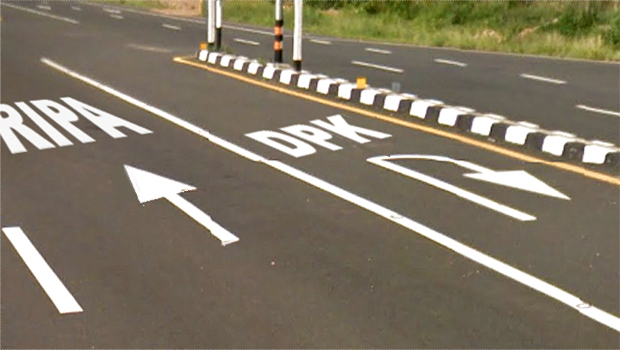 SBC has U-turned on the false claim that the interception of residents’ and Councillors’ emails is authorised under the Regulation of Investigatory Powers Act 2000.

Before proceeding, readers may wish to re-acquaint themselves with Tim THORNE’s short but pithy article of 7th November 2017 entitled “SBC Admit Intercepting Email”.

Tim’s article includes four short video-clips, each of which demonstrates a Council solicitor caught out dissimulating – a polite word for lying.

Honesty in solicitors is not optional; it is the sine qua non of their profession.

On Tuesday 20th March 2018, the SBC Standards Committee considered the following Report seeking the approval of the Policy & Procedures in relation to the Regulation of Investigatory Powers Act 2000 (RIPA).

Councillor Tony RANDERSON [Lab.] made it his business at the meeting to raise the on-going matter of the utter unacceptability of the Council’s interception of emails to Councillors and Officers – and vice versa.

The passage with which we are here concerned is shown below: 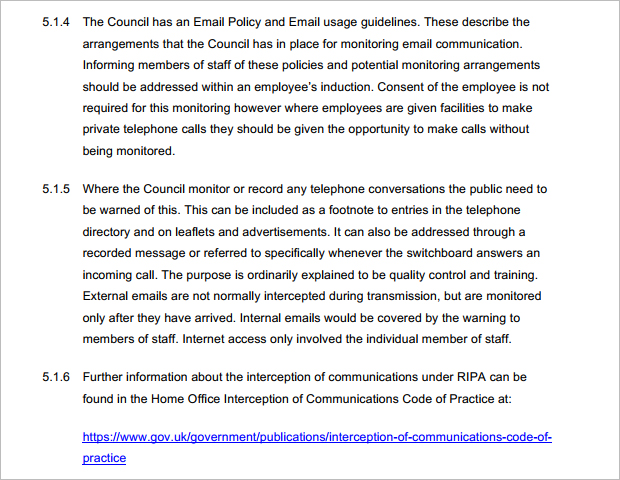 This confirms that the Council does have ‘Policy and Procedure’ (which is a long, long way short of having statutory authority) in place to intercept emails and the Enquirer has deconstructed this ‘Big Brother’ hogwash in a number of articles:

Enquirer crime correspondent Tim HICKS (who is a Chartered Accountant and a Certified Fraud Examiner) has also published extensively on the subject of the Council’s abuse of the legislation:

The so-called “arrangements that the Council has in place” are entirely arbitrary and have no foundation in law.

Nevertheless, I am assured that Mr KITSON told Councillors attending the Standards Committee that “this practice is not covert and is not surveillance, so it doesn’t come under RIPA“.

This directly conflicts with his Mr KITSON’s earlier assertions of 6th November 2017, when he told Full Council that the Council’s practice and policy of email interception was authorised under RIPA (see video-clip, below).

So does it come under RIPA or not, Mr KITSON?

Interestingly, the correct reference can be found here:

The final sentence of which is unequivocal.

Regular readers may recall that, at the meeting of Full Council on 6th November 2017, in response to notified questions from Councillor Tony RANDERSON [Lab.] and Janet JEFFERSON [Ind.] concerning the Council’s practice and policy of intercepting emails, Mr KITSON told the Mayor, Councillors, Officers and members of the public:

“Thank you, Mr Mayor. Yes. Erm. What I’ll do – what I propose to do – is to send you all a detailed response to the issue that’s been raised. But what I can say very briefly is that it is lawful to do what we are doing, under the Regulation of Inves… Investigatory Powers Act, and the various regulations made under that.”

For the purposes of easy reference, the full transcript of Mr KITSON’s assertions can be viewed here.

Clearly, Mr KITSON was ‘winging it’ and almost every element of his statement was untruthful, dishonest and evasive – in short, all that a solicitor is never permitted to be.

In due course, however, Mr KITSON re-iterated and amplified his remarks in an email to all Councillors.

And yet – following my complete deconstruction of his false assertions – Mr KITSON has now been forced, by the diligence of Councillors RANDERSON and CLUER, to admit that the Council has no authority under RIPA to intercept emails – even from correspondents who ‘the Council’ (whoever that means) has, in its infinite arrogance, ‘deemed’ to be “unreasonable“ or “unreasonably persistent” or “vexatious”. Not one of these terms has any basis in law.

Readers are also referred to SBC FOIA Response 4689, of 21st November 2016 (yes, 2016), in which the Council denies holding any information which would authorise “the Telecommunications (Lawful Business Practice) (Interception of Communications) Regulations 2000 the council is using to justify the interception of emails between members of the public and councillors” – (and would treat it as exempt from disclosure under s.42 of the Freedom of Information Act 2000 even if it did hold such information). It goes on to state that:

“The Council is fully aware of the Regulation of Investigatory Powers Act 2000 (RIPA) and the various subordinate legislation applicable in the circumstances. The Council is also fully aware of its responsibilities to the public, and its legal duty of care towards Members and Officers of the Council.”

Significantly, and disingenuously, this falls some way short of disclosing that the Council has been relying on its perhaps deliberate misinterpretation of  RIPA – and this while conceeding that a total of 19 email addresses were, at that time, subject to interception.

If ever there was a Council afraid of what information may be provided to Councillors by concerned members of the public, Scarborough Borough is that Council – a Council with so much to hide.

In short (as Tim THORNE publicly stated at the time), Mr KITSON LIED to Full Council and has now been forced to U-turn.

In the four months since Tim THORNE accused Mr KITSON of lying, Mr KITSON has made no attempt to challenge or refute the accusation. Looking at these synonyms form the ‘legal’ section of the Free Dictionary, it is easy to see why:

One dreads to think what kind of low-life would hire a solicitor displaying those standards of conduct.

And let us not forget that both the Leader, Councillor Derek BASTIMAN [Con.] and the Portfolio Holder for IT, Councillor John NOCK [Con.] swallowed and regurgitated Mr KITSON’s follow-up email to Councillor RANDERSON and to Tim HICKS (and to Enquirer readers, courteous of Mr HICKS) – though, significantly, neither repeated the false claim that the email interception was legitimised under RIPA (which it most certainly is not). All of which suggests to me that MR KITSON may have been forced to inform them that he had been “economical with the truth” (as the saying goes).

He has not, however – as far as I am aware – offered his apologies to the Mayor, the Councillors, the press and the public for his dissimulation. It is high time he did.

In all likelihood, Mr KITSON ‘dissimulated’ not of his own volition, but under the direct instruction of a superior. That superior can only be either the Director of Legal & Democratic Services, Mrs DIXON, or (one notch higher) the Chief Executive, Mr Jim DILLON.

Nevertheless, it is Mr KITSON’s inalienable duty as a solicitor and Officer of the Court to be truthful – even if it costs him his job. “I was just following orders” is simply not good enough and in no way mitigates his lapse of integrity.

The simple truth is that emails are intercepted (and often completely blocked) with no lawful authority at all.

The simple truth is that emails are intercepted because they raise uncomfortable questions about the legality of the Directors’, Leaders’ and Cabinet Members’ activities and expose wrongdoing including the JACONELLI paedophilia and associated cover-up, the double-dipping of IT/Broadband Allowances, the profiteering disregard of  the legal requirements of the parking legislation, the mismanagement of land transactions, the absorption of s.106 monies, and on and on and on . . . all exposed by people whose emails have been intercepted/blocked.

Early on 29th March 2018, Mr KITSON emailed all Councillors, disclosing the names of those members of the public whose emails are ‘deemed’ to be so “unreasonable”, “unreasonably persistent” and/or “vexatious” as to necessitate their CENSORSHIP – for fear their content may distress ‘snowflake’ Councillors and Officers. The number is now allegedly only 4  – as compared to the 19 confirmed in the earlier FOIA Response. I have copies of the vast majority of these emails. What they have in common is well-argued and well-evidence allegations of wrongdoing and illegality. In short, they have a lot in common with this article – which only someone with something to hide would regard as “vexatious”.

Incoming emails are more encouraging. Readers are invited to smile at the following example (the first from a Tory Councillor, no less):

“Please find attached file containing the private email addresses of 22 of the 50 Councillors, including my own. I only wish I could provide the other 28”.

“I like the article on NYE on Bastiman’s views on contributors to NYE. I have looked up distress – ‘Distress is a state of extreme sorrow, suffering, or pain’ – and cannot see that emails requesting information from our transparent council and staff members should in any way cause them distress!

We all know it is their antics coming to light which cause them distress.

Keep up the good work.”

But the biggest ‘question mark’ now hanging over SBC’s ludicrous attempts to censor communications between members of the public and members of the Council revolves around Gmail’s revamped service, with its “new ‘confidential mode’ that allows users to send emails with expiration dates, prevent the forwarding, copying, downloading or printing of emails and revoke previously sent emails. Emailers can also dictate that recipients have to input a one-time password to read certain messages, in an attempt to ensure that only the intended recipient receives the information”.

Clearly, should Mr KITSON or any of his colleagues intercept Gmail messages designated by the sender as “confidential”, this will result in the message “self-destructing” – thereby preventing its delivery to the intended recipient, which may well be an offence.

Is this acceptable conduct from a public servant? Not in my view.