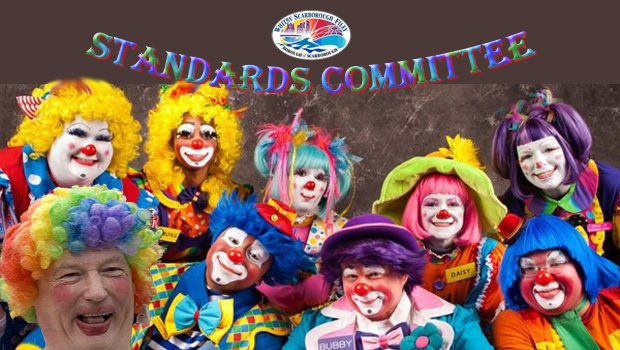 An Open Letter from Ali Wilkins regarding the toothless national standards procedure for keeping errant local councillors in line and also the arbitrary and biased application of those rules by the Officers at Scarborough Borough Council.

Remember Cllr Mallory’s error about Futurist expenditure?  According to Lisa Dixon, Helen’s email to another councillor stating why she could not discuss in Council – is my written response!  Not quite what I expected for the wrong figures.

In light of this when regarding faults in the Vote of No Confidence in Cllr Bastiman and Portfolio Holders meeting last June, I followed protocol. I put three complaints about errors in procedure / conduct to the Standards Committee. Six months later I received notification that the Monitoring Officer and an Independent person deemed there was no case to take to Standards.

So now I know why Standards meetings are as rare as hen’s teeth!

I was annoyed because for me the whole meeting was engineered.

For the uninitiated public: It kicked off with special dispensations allowing Cllr Bastiman and Portfolio holders to debate, sanctioned by an undocumented phone call Lisa Dixon had with a firm of Solicitors. Later she confirmed they could also vote. Cllr Cross’s move to go straight to the vote was ignored.

The Mayor seemed to have little idea of procedure unless prompted by Whispering Jim Dillon, who in my opinion via this method chairs most full council meetings. Occasionally the Mayor slipped his strings. Despite being told twice they could film in the Gallery he loudly ordered a person filming to be removed – later he declared the meeting closed – before the vote was taken!

The Mayor did not allow others to debate. (Perhaps they should have had the phone call too.) The Gallery clapping, not unheard of, was a timely excuse to halt proceedings. Not the fault of other members, but they bore the brunt of the outraged Mayor because having had ‘debate’ by those with special dispensations the Mayor proposed to go straight to the vote. Anyway you get the picture.

Endeavouring to persevere I took my complaints to the Local Government Ombudsman.

The LGO cannot investigate unless I have suffered substantial personal injustice. I felt that I had, as the debate was one-sided I was not represented.

The LGO cannot investigate breaches of code of conduct, as this affects most or all of the community. Not entirely sure how this works. But for me, not allowing fair debate or following rules results in poor decisions which do affect most or all of the community, which is why the vote of no confidence was brought in the first place. So they are right – but why is it not deemed wrong?

Needless to say my complaints were not upheld.

So Councillors disregard codes of conduct and a constituent cannot take them to task through the channels set up specifically to maintain fair standards.

This should have gone to the Standards Committee, but getting past the Monitoring Officer, in this case Mr Kitson, is like trying to juggle sand.

Meetings would be fairer if rules were followed and if perhaps the Monitoring Officer did a bit of monitoring.

Testament to disregard of the code of conduct is Cllr Bastiman, devoid of respect for the family, giving false information to YCR of the death of a much respected Scarborough citizen.

Nobody should be above rules and regulations. I am asking the Leaders of the Opposition Parties for their scrutiny of this flawed system. I am hoping they will unite for the good of the town.