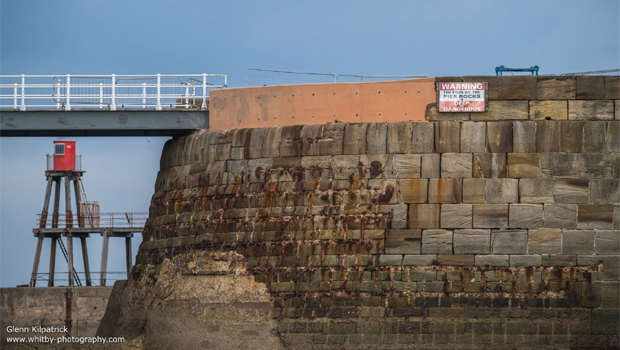 On 18th November 2018, my attention was drawn to the recently-unveiled restoration work undertaken at the west end of Whitby’s West Pier (see picture above, courtesy of Glenn KILPATRICK).

Within a very short time of Glenn publishing his photograph on social media, my phone was ringing like a fire-engine with calls from Whitby and Scarborough residents expressing shock and disapproval – and not a little anger – at the gross insensitivity of juxtaposing orange concrete with the original Aislaby sandstone.

Good news, then. It is not “the finished job”.

Meanwhile, I had received a message from an Enquirer reader, informing me that an approach had been made to SBC Portfolio Holder for major Projects, Councillor Mike COCKERILL [Ind.Ind.], expressing the widely-held view that the repair work pictured above was “completely out of character” and “a complete eyesore not in keeping with the surrounding area”.

“As the Piers are Listed Structures the detail of the wall has been largely dictated by what is acceptable to that designation. It has been confirmed that the construction is appropriate to it.”

This would appear to confirm, shockingly, that that horrendous orange concrete “complete eyesore” is indeed “the finished article” – in diametric opposition to Ms JANDZIO’s assurances, because (according to COCKERILL) “It has been confirmed that the construction is appropriate to it.”

Where lies the truth, Ms “We can assure you that it is not the finished job” JANDZIO? 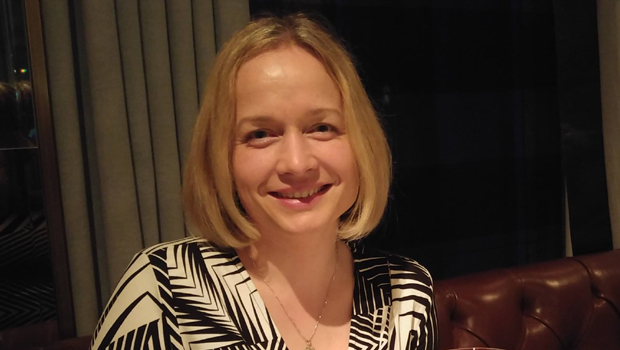 My knowledge of restrictions and regulations regarding Listed assets is minimal; however, the web is full of advice to the following effect:

“Restrictions are there to protect the historic significance of the building. Any change which affects the listed fabric of the building is illegal unless approved by your LA (Local Authority). Routine repairs and maintenance are excluded, so long as they are in like for like – and use materials sympathetic with the building.“

This would suggest that, in the present case, it is Scarborough Borough Council who may have approved their own proposals regarding the  Whitby West Pier repairs without due regard for that like for like proviso.

My source must have shared my misgivings, because he went back to Councillor COCKERILL, as follows:

“I thank you for your prompt reply but must ask exactly who has deemed it acceptable and appropriate? It clearly is not in keeping with the surrounding area or indeed a listed structure and in it’s present form “sticks out like a sore thumb”. Where may I view exactly what detail is acceptable to that designation?”

Councillor COCKERILL completely ignored my source’s request to learn who exactly had designated the repair methods/materials as “appropriate”, responding evasively:

“Please bear with us in regard to the wall.

As yet I have not been able to visit to view for myself but I have seen a photo. Projects officers are in discussion with our contractors and I expect to have a meeting later this month.”

It needed a reminder from my source to elicit Councillor COCKERILL’s promised email (of 13th December 2018):

“Thanks for your email. The contractors are aware of my thoughts about the new wall. They have some ideas about improving the visual aspect and will be conducting trials. The final method, whatever it is, is unlikely to be implemented prior to their return to site in late March.”

In fact, some experimental rendering appears to have been undertaken. Neither I nor any of my sources can report any visible improvement.

So I shall be watching, as will many others.

Perhaps one of our elected members would like to ask the Monitoring Officer, Mrs Lisa DIXON, to investigate whether it was Ms JANDZIO shooting a line – or Councillor COCKERILL. Clearly, one of them dissimulated.

Accountability and all that . . . 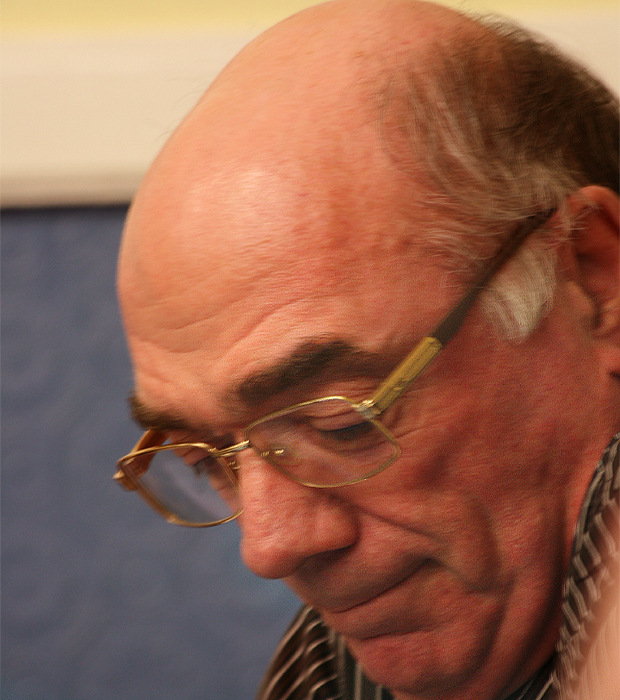