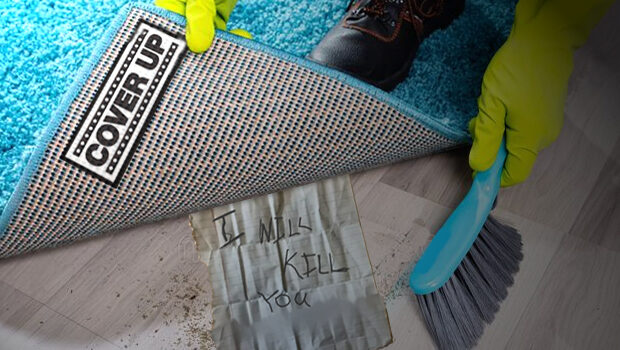 Readers may have noted the paucity of information provided in the Scarborough News coverage of events at Full Council on 1st November 2021, as compared with my detailed report “‘Member Safety’ Protest Rocks Council” published previously. The Scarborough News article attempts to downgrade threats of murder to some unspecified level of “abuse”.

Could it be that the SN has been ‘got at’ by the Council? Unfortunately, that is all too easy to believe, because a source privy to research undertaken by BBC Radio York informs me that the Council has claimed never to have received any complaints about the perpetrator’s conduct. That is a bare-faced lie.

How do I know that? I can confirm that the Council has received complaints – and has brushed them aside in a desperate attempt to prevent discrediting the present administration.

Please review my email to SBC CEO Mike GREENE dated 10th February 2021, following the storm of threats against Councillors and members of the public issued over the Christmas period:

I am indebted to a public-spirited blind recipient for the following email to Mr Mike GREENE from Mr James CORRIGAN (whose consent I have obtained, by proxy, to reproduce here – and I am assured that no response was ever forthcoming), This email precedes my own email, above, by about a month. Please note the attachments shown at the foot of the email): 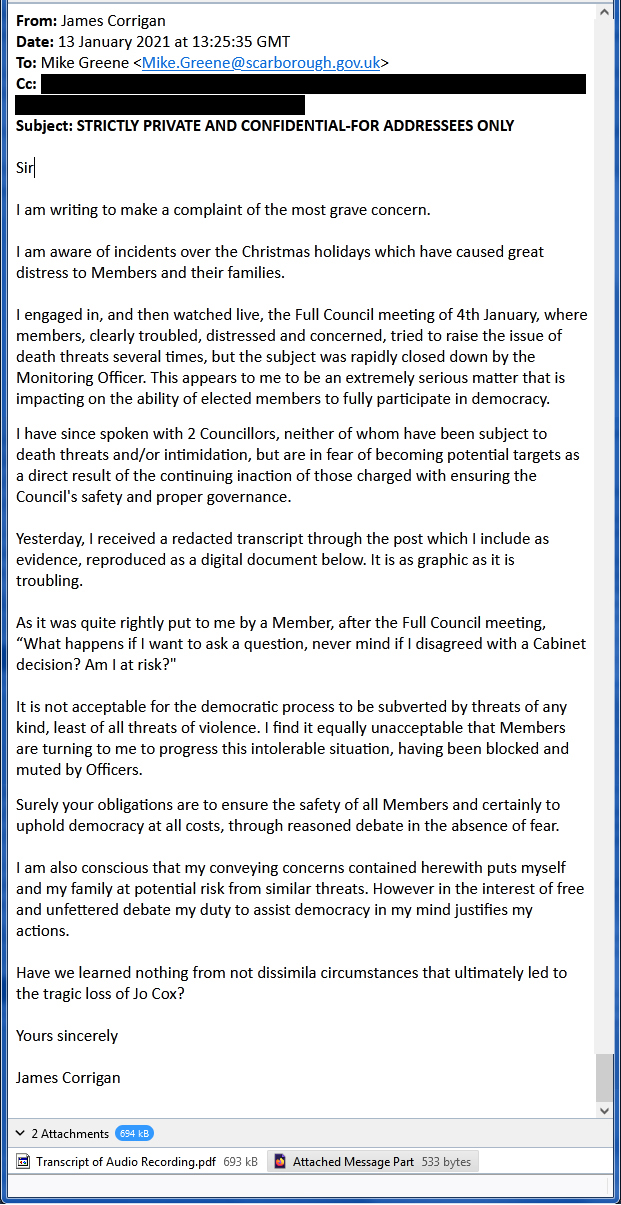 Mike GREENE heard that blood-curdling rant in the immediate aftermath of a barrage of threats over the Chrsitmas period.

I also present a formal Decision Notice dated 8th March 2021, signed off by Mrs Lisa DIXON, in respect of a formal Standards Complaint lodged by a Hunmanby septuagenarian who was physically threatened by the same perpetrator: 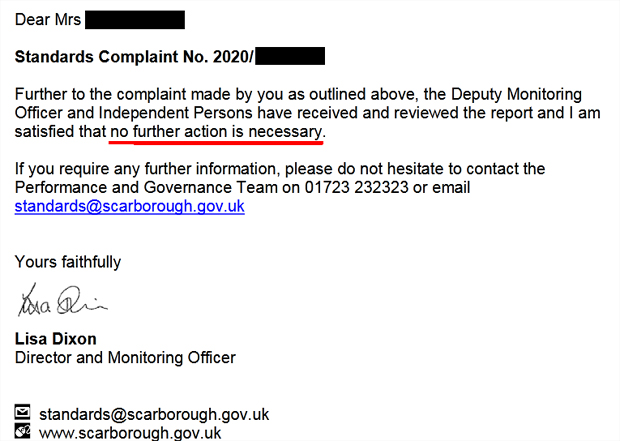 I trust this dispenses with the Council’s claim of ignorance in the matter and demonstrates, once again, its proclivity for blatant deceit.

When push comes to shove – they LIE.

I must applaud the efforts of Deputy Mayor, Councillor Roxanne MURPHY [Y.C.I.A.], in attempting to re-establish some minimal common ground from amidst the toxic wasteland of Full Council:

On Tuesday 2nd November, the Deputy Mayor wrote to all members, as follows: 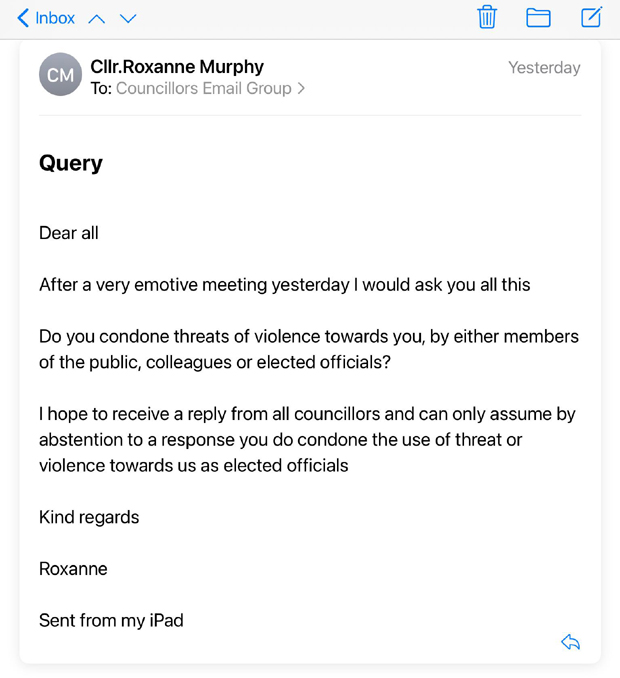 First in line to respond was the former Mayor, Councillor Hazel LYNSKEY [Unaff.], whose misplaced loyalty to the SIDDONS administration is well-known. Councillor LYNSKEY parried the question with double-talk:

Certainly not, old gal – but what about threats in person, over the telephone, by email or on a Christmas card? No dispensation for them, eh? It is only social media you condemn.

A series of more “open and transparent” responses soon followed. I present them below, with a few brief remarks from me, interpolated betwixt and between.

Firstly, Councillor Guy SMITH [Y.C.I.A.], himself a victim of threats by the same perpetrator – one of eight (to my knowledge; I believe there are more): 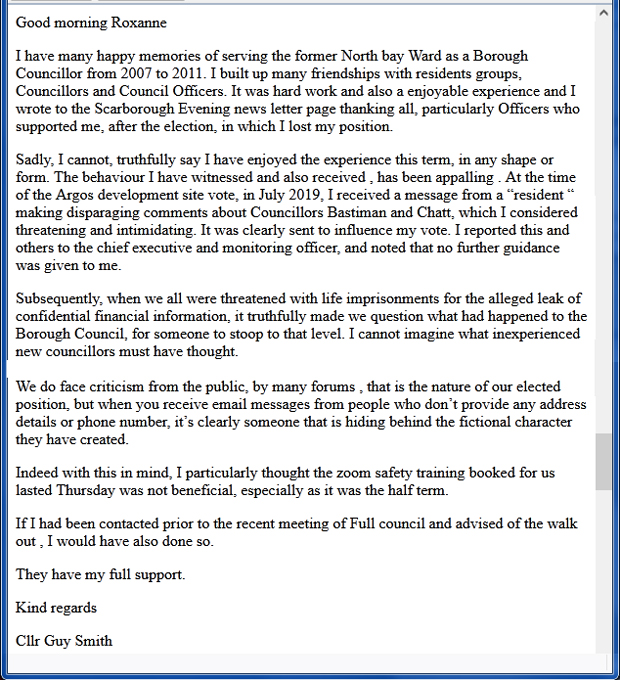 Councillor SMITH appears to have been hung out to dry by the Executive.

Next, here is the response of Councillor Heather PHILLIPS [Con.], another victim of the same perpetrator, who was duly prosecuted and plead guilty to her attack on Councillor PHILLIPS: 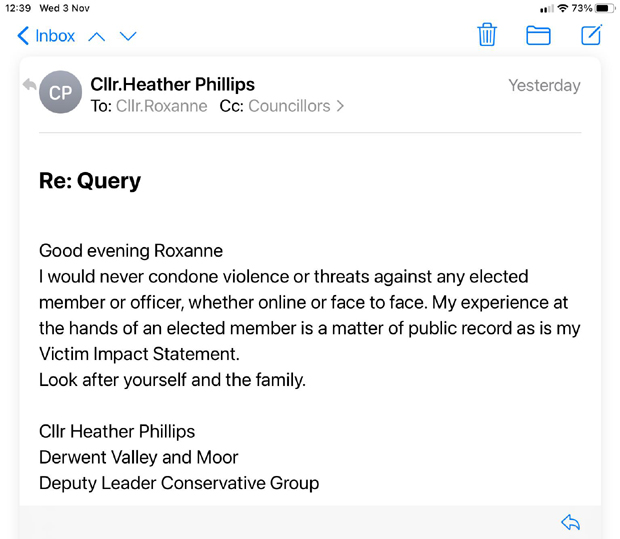 Next, I present Councillor Phil KERSHAW [Ind.], who runs to true to form in terms of the naïve trust he invests in Officers who have time and again been proven dishonest: 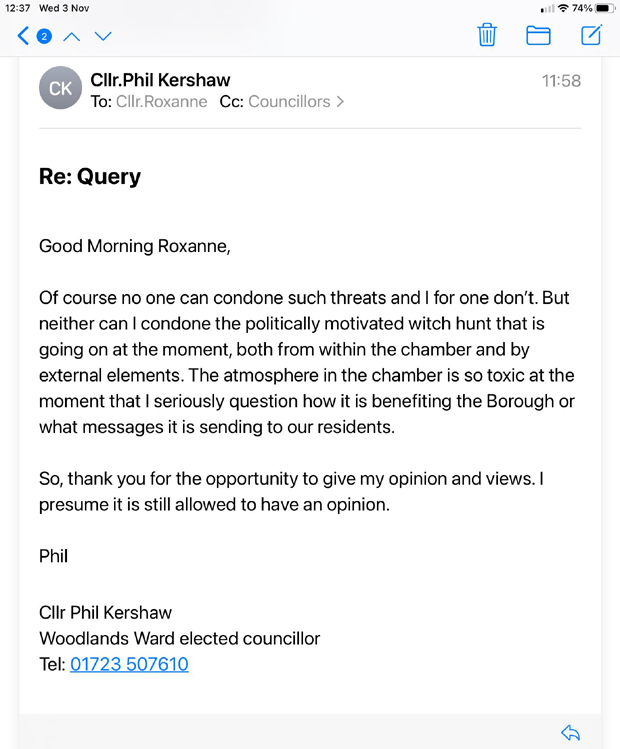 The Deputy Mayor was perhaps too kind in a response, but not without an ironic twist: 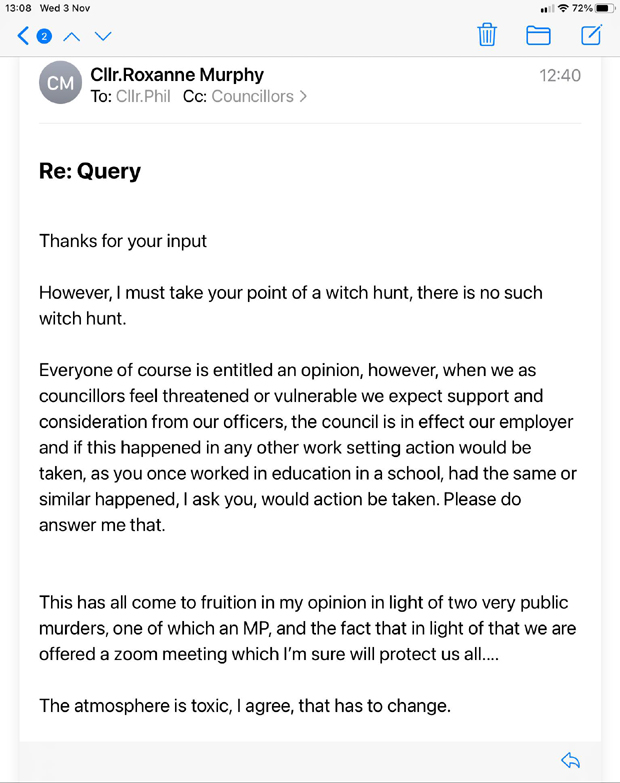 Councillor Bill CHATT [C.I.M.], himself another of the victims, made an extremely pro-active contribution: 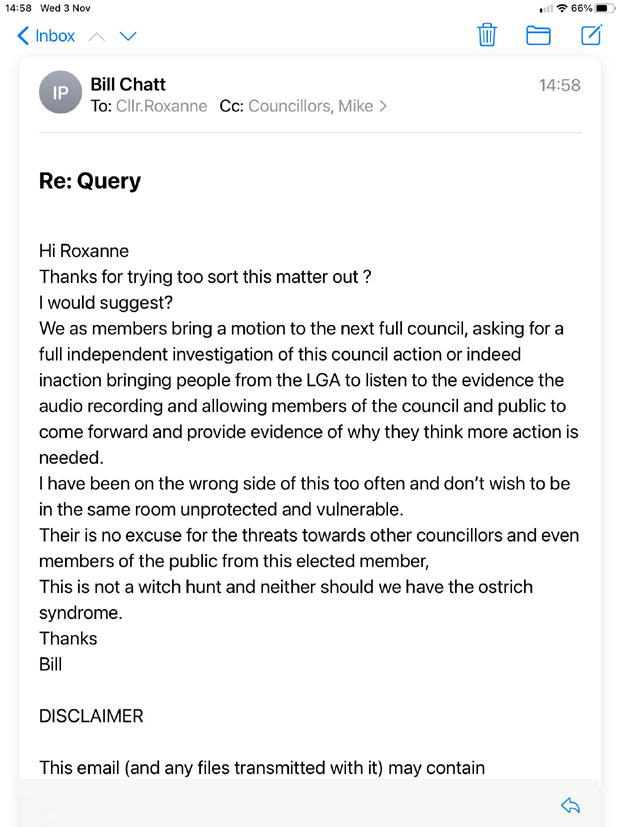 The audio recording to which Councillor CHATT refers has been available in the public domain – unchallenged – for nine months, here; and a transcript, too, here. Picture the faces of the members were that audio to be played in Full Council. 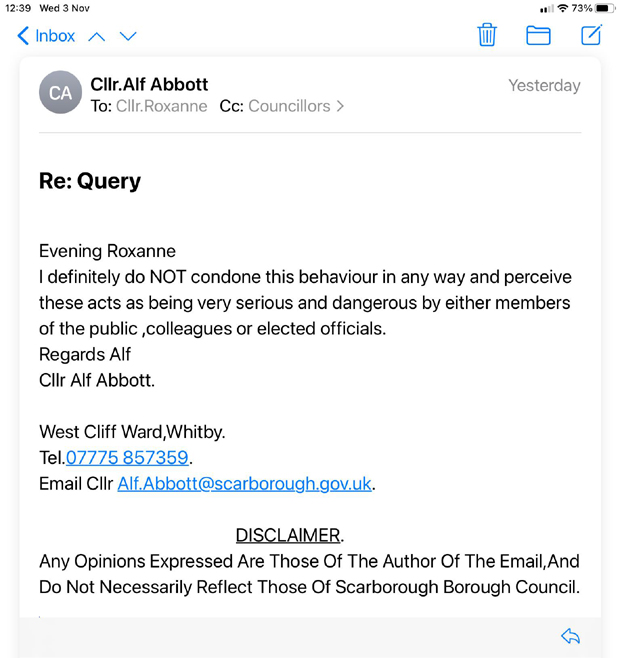 Others, like Councillor Marion WATSON [Con.] steered a safer but no less commendable course: 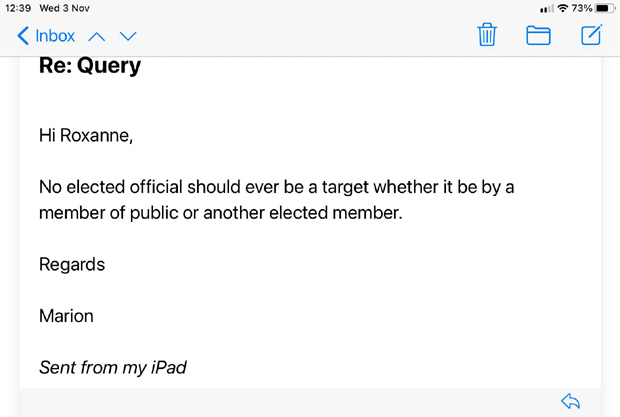 Councillor Derek BASTIMAN [Con.] has the unenviable distinction of having been threatened more than once: 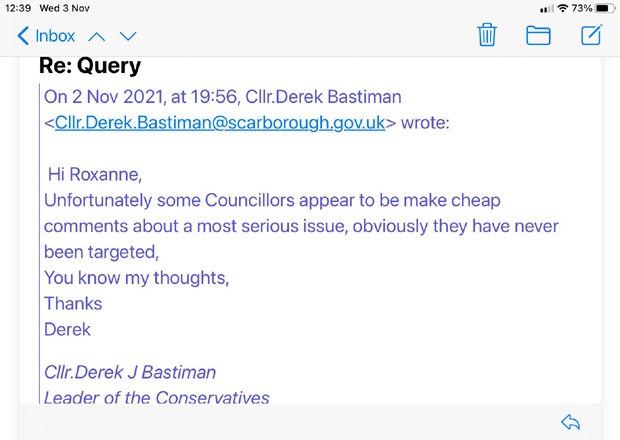 Councillor Clive PEARSON [Con.] was more effusive and most emphatic: 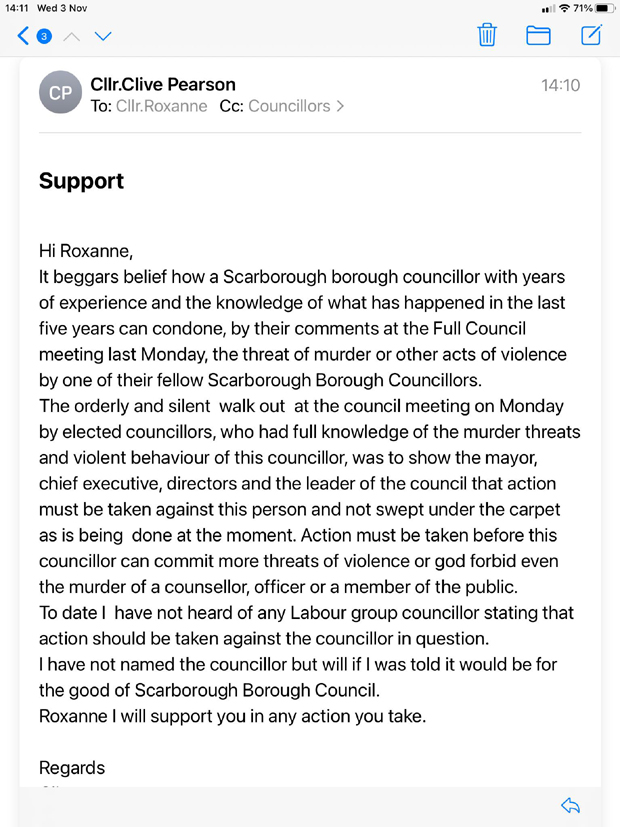 Finally, a couple of later responses, firstly from Councillor Neil ROBINSON [Green.] and then Councillor Glenn GOODBERRY [Con.], both unequivocal in their support: 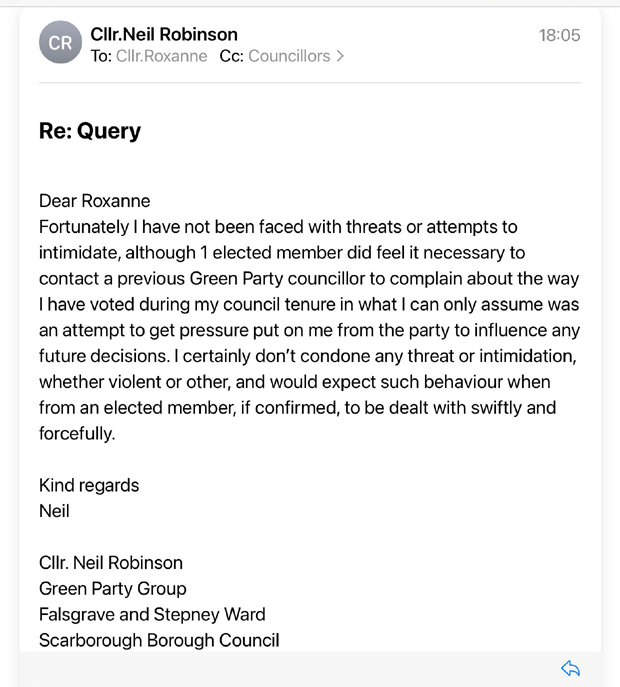 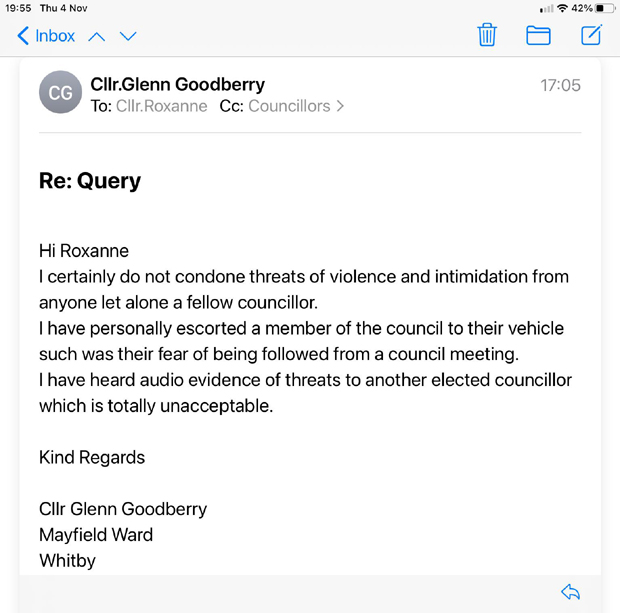 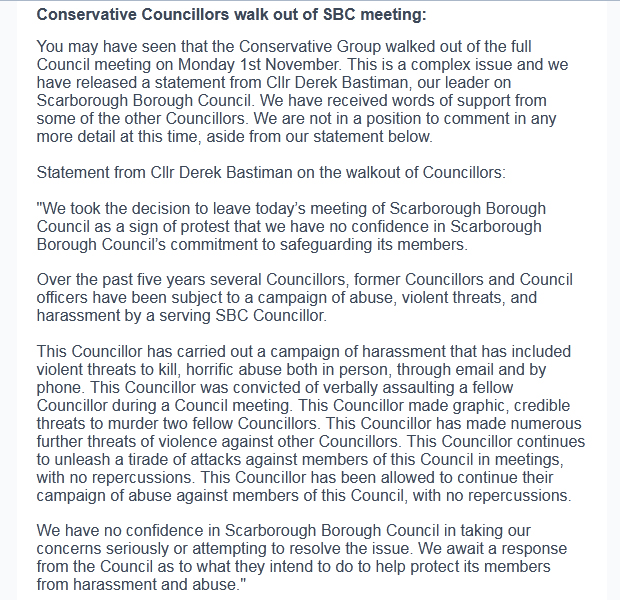 One other related comment is worthy of note. SBC Councillor Theresa NORTON [Lab.], one of 32 Insulate Britain activists facing charges carrying 2 years in jail (according to this MailOnline article), is quoted (albeit in a parallel context – national goverment, as opposed to local government, practice and policy):

I mention this because today SBC CEO Mike GREENE has emailed all members, in typically authoritarian terms, attempting to throw a fire-blanket over these Councillors’ legitimate concerns and cautioning them not to communicate on the subject.

Councillors are reporting to me that some of the emails reproduced above have already ‘mysteriously’ disappeared from the Council’s ITC system.

“Openness and transparency”? Gone with the wind!

Call me cynical, if you wish, but should it really be the case that the “reputational management” of the Council (the view from within the Ivory Tower is so clouded that the inmates are blithely unaware that the Council’s reputation is irretrievably in the gutter) takes precedence over the SAFEGUARDING of Councillors and ratepayers?

Surprisingly, the answer is “No!”.

The reputation of the Council pales into insignificance in the greater scheme of things. What is vitally important – and only a handful of Councillors understand this – is the TRAJECTORY of the administration, and by ‘administration’ I mean the Executive (senior Officers) and the Leader.

By TRAJECTORY, I mean the course plotted by what is know in legal jargon as “the directing minds” – the tail, not the dog.

Over recent decades, two-party politics has prevailed at Scarborough Borough Council – Conservative and Labour. This is why I am opposed to party politics at local level. For the purposes of the TRAJECTORY of the Council, only one party matters – the incumbent party; in the present case, Labour. The Independent Group holds a similar position to the LibDems in the 2010 coalition; a flimsy crutch. As far as the Executive is concerned, the Opposition can go to hell in a hand-basket. In fact, the Officers will turn hell inside out to prop up the incumbent Leader – any incumbent Leader, of whatever stripe – because only she/he can apply the rubber-stamp of DEMOCRACY to their machinations. (“It wasn’t me, Your Honour – the elected members ratified it!”).

Such is the power of the party whip that almost every Motion is resolved along party lines. Councillors’ prime loyalty (to party) ensures that representation of the electors comes a distant second. Remember SIDDONS leading his Labour Group out of the Chamber in protest against the interception of emails? Once in office, the U-turn was instantaneous – just as Officers intended.

Thus, the critics are marginalised.

Thus, against the will of the people, the Futurist was demolished.

Thus, against the will of the people, the ARGOS building will be demolished.

The colour of the rosettes is immaterial. The TRAJECTORY is what matters – and it is all that matters.

But the presently incumbent Labour Group has such a flimsy mandate (nominally 13 seats, but in reality, only 12; because 1 member is unlikely to appear in Council ever again) – barely a quarter of the Chamber.

Thus, SIDDONS is reliant on the support of his allies, the Independent Group. The deal he cut with them at the time of the most recent (second) Vote of No Confidence, required him to appoint 3 Independents to his Cabinet. Following the resignation of Councillor Andrew BACKHOUSE [Unaff.] from the Independents, that Group now has only 6 members, giving SIDDONS’ alliance a total of only 18 votes in Chamber. For a majority, 24 votes are necessary.

The Executive is relying, for the success of the ARGOS venture and the rest of the “spend-spend-spend” (our money) Commercial Property Investment Strategy (CPIS), entirely on Councillor SIDDONS retaining the Leadership until the demise of the Council in April 2023, so that decisions (which are virtually always resolved along party lines – the incumbents invarialbly beat the Opposition) are rubber-stamped, thus ‘democratising’ this whole corporate game of Monopoly played with real money – ratepayers’ money.

If SIDDONS falls, then the whole Monopoly board will lie dead in the water.

Should any member of the Labour/Independent alliance be disqualified from office (for example, Councillor Theresa NORTON, whose pending charges related to her Insulate Britain activities may lead to a custodial sentence of three months or more (disqualification is then automatic), then SIDDONS’ perilously weak grasp will be weakened even further.  The Officers know their rubber-stamp is floundering.

Fortunately for SIDDONS (and the Executive), Councillor NORTON is a mere pawn – and a loose cannon, at that. Perhaps even a liability.

But the loss of a Portfolio Holder (a front-row piece) would leave SIDDONS’ Leadership useless to the Executive. From that perspective, the administration becomes untenable. Time for a new Leader. The TRAJECTORY must have a credible Leader. And then the Officers will ditch SIDDONS just as they did BASTIMAN when his mandate collapsed.

The determination to protect the perpetrator of the threats – even at the risk of life and limb (provided that the life or limb belongs to a member of the Opposition) – is so core to sustaining the TRAJECTORY of the Council (i.e. property investment – e.g. Travelodge, ARGOS, Pavilion House, Comet – even throwing Benchmark out of the North side) that everything else – even “reputation” – must, if needs must, be sacrificed.

Fortunately, “doing the right thing” is central to the Enquirer’s philosophy. It seems that it is also central to Mr CORRIGAN’s philosophy. And the key to the whole shebang is the TRULY Independent membership – the Cluster of Independent Member [C.I.M.] and the Yorkshire Coast Independent Alliance [Y.C.I.A.]. These are the members who, along with the best amongst the much-chastened (after their 2019 defeats) Conservatives, may just pull this Borough back from the brink.

Who are the victims of the threats? I do not propose to name names – some of them have already appeared in this article – but I am clear that, had they been members of the incumbent administration threatened by a member of the Opposition, the boot would have been on the other foot. Not one victim amongst the incumbent administration. Do not talk to me about “political games”, Councillor.

It is time to give this murderous bully the boot. Surely that is within the power of Full Council? 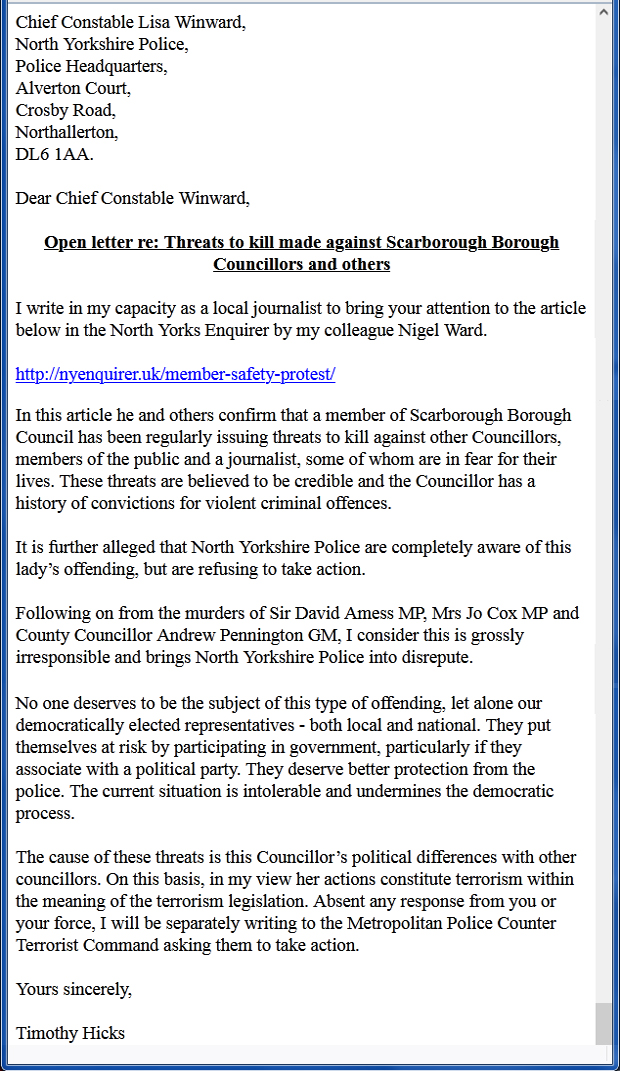