The entire country has been shocked and deeply saddened at the brutal murder of Miss Sarah Everard, by Wayne Couzens, a serving Police Officer from the Metropolitan Police.

The Metropolitan Police is now conducting an antecedent investigation to identify a) why he was not detected, and b) any other crimes he committed.

Regular NYE contributor and retired Police Intelligence Officer Chris Clark is the UK’s leading investigator of serial killers. He has investigated the history of offending of serial killers and rapists Christopher Halliwell, Peter Sutcliffe, Robert Black and Angus Sinclair, to identify all of their victims, not just the ones they were convicted of attacking. This specialist type of investigation is called an antecedent investigation.

Antecedent investigations are important, because they resolve cold cases and bring closure to the relatives if the victims.

Chris has suggested in the Daily Mirror that Couzens was a ‘serial killer acting in clear sight’. Criminologist Professor David Wilson and Criminal Psychologist Dr David Holmes have both independently come to the same conclusion.

A competent antecedent investigation has to openly, fully and impartially consider the offenders history, modus operandi and geographical range of operation.

Accordingly, the antecedent investigation into Couzens will have to proactively consider all suspicious disappearances, unsolved offences of murder, rape and indecent exposure in the period 1988 onwards, in areas he was associated with, to identify if they were committed by Couzens.

An open, full and impartial investigation?

Couzens was born in 1972, lived in Kent from that date to his arrest in 2021, with short spells of working and living in Cumbria from 2011 – 2012 while an officer of the Civil Nuclear Constabulary and working in London while a Metropolitan Police officer from 2018 to 2021. He is known additionally to have visited the Ukraine regularly to visit his wife’s family.

The NYE has identified serious failures in the geographical scope of the Metropolitan Police investigation into Couzens:

Chris Clark’s observation on this inexcusable confusion is:

‘In my humble opinion, the investigation into the antecedent history of Wayne Couzens portrays that, as in the case of Peter Sutcliffe, Robert Black and Christopher Halliwell, that he is probably a police force cross border/district offender and should be investigated by a central agency and that is The National Crime Agency, which should hold details of cross border unsolved murders and rapes and be able to analyse them against Couzens known timeline.’

Unfortunately, individual Chief Constables (not the NCA) are responsible for antecedent investigations, leading to this hopelessly uncoordinated approach.

In response to a media enquiry from the NYE, the Metropolitan Police refused to confirm Couzens’ police collar number, the operational code name of the investigation, its terms of reference, or how many officers were allocated to it. Nor would it confirm why it would not release this basic information. This is inconsistent with an open approach and the need to reassure the public.

The Daniel Morgan Independent Panel identified that a Detective Sergeant who had been accused of murdering Mr Morgan was a freemason and master of two lodges, which had police officers as members. At least ten of the police officers who were investigating Mr Morgan’s murder were also freemasons and may have been socialising at the lodge with this suspect at the same time they were investigating him. It recommended:

“that all police officers and police staff should be obliged to register, in confidence, on joining the police force or at any point after their recruitment, their membership of any organisation, including the Freemasons, which might call their impartiality into question or give rise to the perception of a conflict of loyalties.”

The Met is currently refusing to confirm if Couzens was a freemason:

“Your questions about whether Couzens was a freemason are neither relevant to the investigation – or his employment within the Met.”

When I asked the Met to clarify if it meant my questions are irrelevant because he was not a free mason, it responded:

“We have nothing further to add to our comprehensive response sent yesterday.”

On the basis that a simple “No he wasn’t a freemason” would have resolved the question, I can only conclude that a) Couzens was a freemason and b) the Metropolitan Police is trying to prevent this information from coming into the public domain. This causes me some concern for the following reasons:

I wish to emphasise that there is no evidence that if indeed Couzens was a freemason, that this had any relevance to the murder of Sarah Everard. However, as it currently stands we will never know, because the Met will not respond openly on this issue.

The Daniel Morgan Independent Panel accused the Metropolitan Police of having a primary objective of concealing its failings over its bungled investigation into the unsolved murder of Mr Morgan:

It must be a concern that the same issues are already contaminating the antecedent investigation into Couzens.

In an investigation with as high a profile as the murder of Sarah Everard, this reflects discreditably on the Metropolitan Police and the Chief Police Officer responsible for it; Commissioner Cressida Dick.

Commissioner Dick was appointed as Metropolitan Police Commissioner in April 2017. She has been mired in controversy. 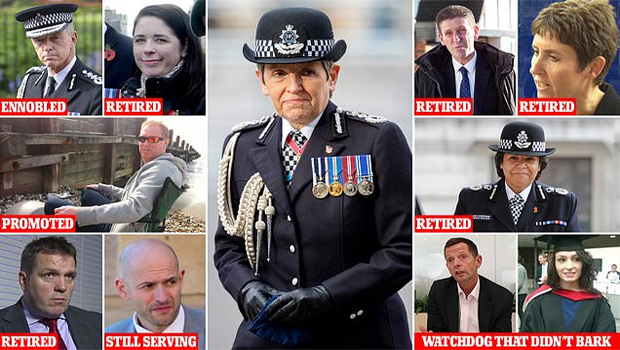 Commissioner Dick has not tightened up standards of conduct in the Metropolitan Police. According to this Daily Mirror article twenty seven Metropolitan Police officers have been convicted of sexual offences including voyeurism and possession of indecent images of children since 2016. A misconduct panel found their conduct was distasteful but did not amount to misconduct. Incredibly, one officer was recruited last year despite a conviction for indecent exposure. This BBC article details a Metropolitan Police officer accused of raping two of his female colleagues who was not charged or even suspended from duty.

Commissioner Dick dismissed widespread public outrage and criticism by the Home Secretary, and the Mayor of London of the way the Metropolitan Police broke up a vigil for Sarah Everard, by referring to them as “Armchair critics”.

The clear implication of her remarks is that she believes anyone who is not a police officer should not criticise the police and she will disregard their views. This is unacceptable for a chief police officer leading a police force that is supposed to police a democracy by consent and is facing a crisis of public confidence.

When Couzens was arrested, Commissioner Dick did not immediately order an enquiry to identify what went wrong and what needed to be done to prevent this from happening again. Her statement when Couzens was convicted did not make any reference to institutional failings in the police, or the need for any reforms to address them. She only announced that a “senior independent person” would oversee an enquiry into the Metropolitan Police’s standards and culture seven months after Cousins was arrested and only after a furore of criticism. She should have done this much earlier.

Nothing can bring Sarah Everard back.

What is important now is that there is a full, impartial and open investigation to identify other crimes he has committed and the systemic failures that allowed Couzens to escape detection. Sarah Everard’s case must be a watershed in British policing. So this can never happen again.

Commissioner Dick has consistently defended the Metropolitan Police from criticism. Senior Labour politician Harriet Harman QC has written to the Home Secretary in the following terms:

“It is clear that there had been all too many warning signs about him [Couzens] which had been swept under the carpet.

It [the confidence of women in the Police] cannot be rebuilt with the attempt to reassure that this was just, as the Metropolitan Police Commissioner said, one “bad’un”.

I think it is impossible for the Metropolitan Police Commissioner Dame Cressida Dick to oversee this programme and I have therefore called on her to resign.”

I regret to say I agree with everything Ms Harman said. The failings identified exclusively in this article are further evidence that it is time for her to go.