My thanks go out to the Independent member who has kindly sent me a screenshot which, for a while, puzzled me. At first, I could not recall where I had seen the content before. 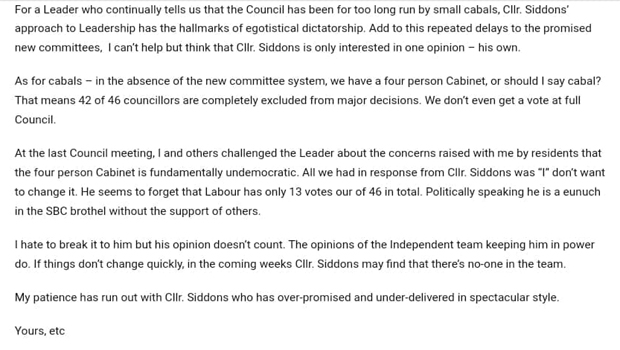 It has to be said that this is a very coherent and convincing document. It is the work of an astute and very focussed mind.

The words which, perhaps because of their shock value, leap off the page, for me, at least, are:

So I decided to search that phrase in Google, to remind myself whence it came.

Here is the first Google return:

Former members of the Independent Group have confirmed to me that, following the Leader’s narrow escape from the first  Vote of Now Confidence, on 3rd January 2020, which he survived ONLY because he had struck a deal with the then senior  Independents to the effect that he would increase his Cabinet to include a total of three of their Group members. The Independents accepted the deal ONLY on the proviso that it would be for the Independent Group to choose which three would represent them, and that Councillor SIDDONS must accept their nominations – with no right of veto. SIDDONS was neatly finessed.

Perhaps Councillor SIDDONS never followed the URL-link shown above (and again here: https://nyenquirer.uk/political-eunuch-in-sbc/ ). If he did, he must have been spitting feathers about one of his soon-to-be Portfolio Holders publicly stating that damning opinion of him, signed off by Michelle DONOHUE-MONCRIEFF in her capacity as a Councillor. Here is the damning passage

The Councillors’ Code of Conduct prohibits disrespect – as do Lord NOLAN’s Seven Principles of Public Life, embodied in the Localism Act 2011.

It is inarguable that publishing, in her official capacity, the view that Councillor SIDDONS (i) has (colloquially speaking) no balls and was/is (ii) autocratic), (iii) over-promising, and (iv) underdelivering, was grossly disrespectful – whether true or not.

It was also a shot across SIDDONS’ bows  – “If changes don’t come quickly…”, she wrote. More than a hint of threat there.

The implied message was clear: Play ball – or else we will pull the rug.

With ‘allies’ like that, who needs enemies? Was the Leader finally learning the ruthlessness of local politics the hard way?

As far as I can determine from the Council website, the Leader never lodged a Standards Complaint against Councillor DONOHUE-MONCRIEFF for her gross disrespect, uttered in her capacity as a Councillor. From a strategic perspective, he could not afford to alienate her – or, indeed, any senior member of the Independent Group because his Cabinet-Lite was incapable of coping with the sheer volume of work. He need to appoint more Cabinet Portfolio Holders. It was a condition of survival of his administration. But the Independents had him by those very parts that, according to Councillor DONOHUE-MONCRIEFF, he sadly lacks.

When the first Vote of  No Confidence was called (for 3rd January 2020), former Independent members tell me, opted for a desperate and thoroughly immoral deal to ‘buy’ votes by agreeing to appoint two further Independents to his new Cabinet (which already contained nominal Independent, Councillor Janet JEFFERSON), without considering the terrible consequence – which was, so the narrative goes, that he was forced to metaphorically ‘get into bed’ with the very Councillor who had insulted both his manhood and his political performance. 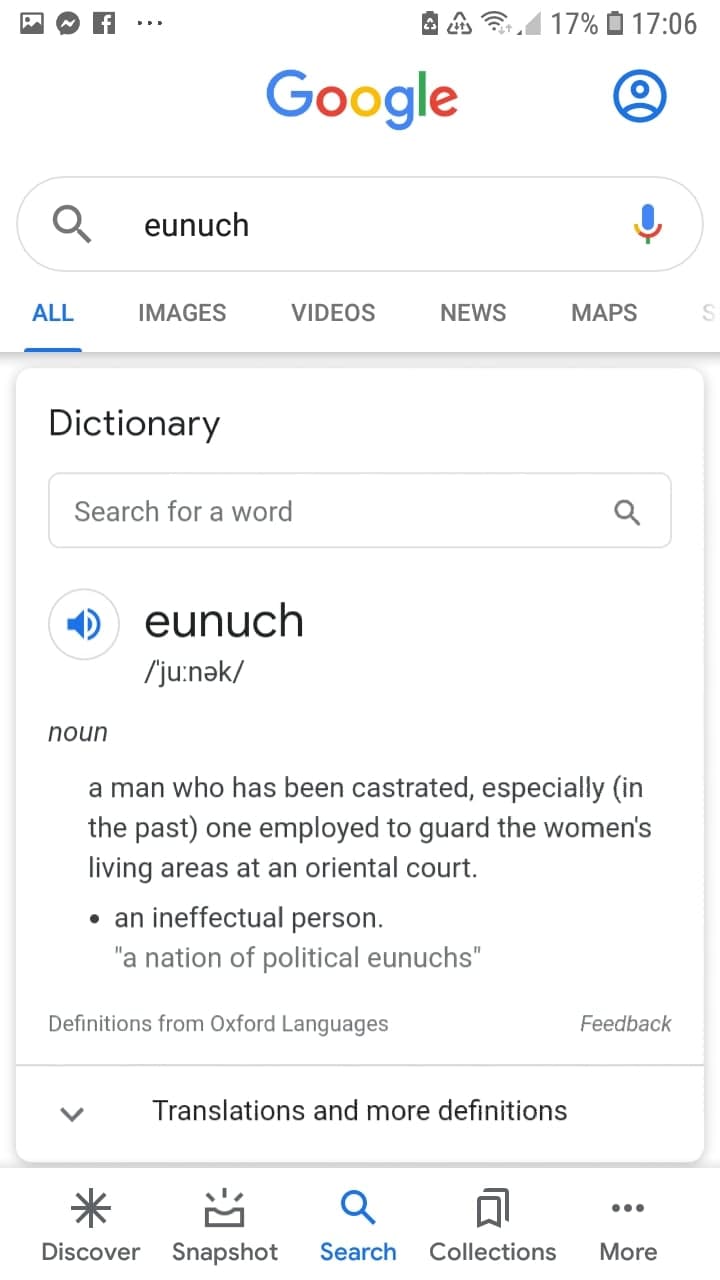 Readers who have questioned my compassion in relation to Councillor DONOHUE-MONCRIEFF are welcome to examine the transcript of the recording, made to evidence the urgent need for Safeguarding intervention. It is not necessary to take my word for that. It has been published and the recording upon which the transcript is based is likely, sooner or later, to appear in the public domain. It will demonstrate that I acted with compassion and integrity throughout.

Thank you for taking the time to talk to me.

As discussed I acknowledge that you do not want the information you passed to me about Cllr Donohue- Moncrieff to be used for any criminal proceedings. The information will be used to safeguard both Cllr Donohue –Moncrieff and others.

Please do not hesitate to contact me if you have any more concerns or if there is anything I can support you with.

Over this past weekend, Councillor DONOHUE-MONCRIEFF posted on Facebook, using her “Cllr Michelle Donohue-Moncrieff” Facebook account (meaning it will qualify for the impotent Standards Committee), the following post – it was quickly removed, presumably because, far from discrediting me (which was, no doubt, the intention), by including the opening paragraph of my email to her following confirmation by the North Yorkshire Police that she had not taken her own life in the aftermath of the death threats (her own and others) incident, it confirms that my priority was always her safety. It still is.

“This type of attack”? I made no attack. I repeatedly offered help – including financial. Read the transcript. Listen to the recording. I sought the professional assistance of the Safeguarding Officer and the North Yorkshire Police with a view to saving her life and those of others. There is nothing “antiquated” about that. Yet Councillor DONOHUE-MONCRIEFF is crying “Wolf!” again.

A Flag of Convenience

I am no longer entirely convinced of the sincerity of Councillor DONOHUE-MONCRIEFF’s claims that she is suffering from “mental health issues”. When it suits her, her writing and utterances show great clarity of mind – as her Enquirer piece of 15th November 2019 (with its veiled threat to Councillor SIDDONS) clearly demonstrates.

And let us not forget that Councillor DONOHUE-MONCRIEFF’s attack on the Policeman’s daughter in Hunmanby took place BEFORE she expressed any ‘grievances’ against Councillors Joe PLANT, Derek & Lynn BASTIMAN and Heather PHILLIPS, whose ‘mortal sin’ it was to deprive of her Portfolio (and its attendant Allowances – there is much mention of money in the transcript and the recording from which it was transcribed – not by me, I might add). The transcript and recording prove irrefutably that she spoke repeatedly of her desire for “revenge” – “revenge”, that is, for being removed from the SBC Cabinet and the North Yorkshire Police & Crime Panel following her assault on the Hunmanby Policeman’s daughter.

Now, with the benefit of four-and-a-half years of observing Councillor DONOHUE-MONCRIEFF in Council and Committee, in her own publications in the Enquirer and on social media, and in scores of hours of private conversation – including her threats of suicide and murder – I begin to suspect that, having twice successfully escaped the appropriate punishment following two separate convictions for violent conduct (to which she pleaded Guilty), Councillor DONOHUE-MONCRIEFF may have discerned that claims to be suffering from “mental health issues” offer a very good prospect indeed, in this modern ‘snowflake’ world of PC euphemisms, for evading the normal and just consequences of criminal conduct – a “Get Out of Jail FREE” card.

My view is beginning to align with that of Abraham LINCOLN. 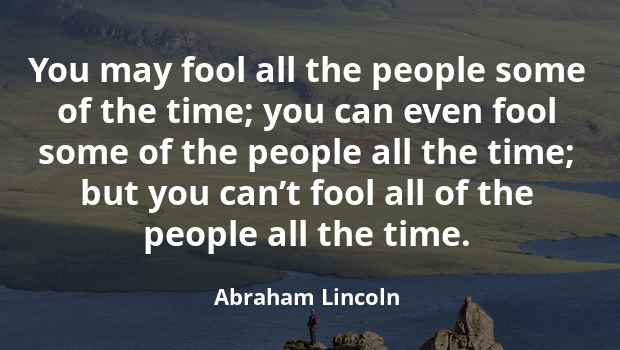 I am no longer willing to be fooled.

I have made CEO Mike GREENE and Director of Legal Lisa DIXON aware of my view – which they have elected to disregard. Some Duty of Care!

Technically, if not temperamentally, she is one of the better Councillors.

I remain unconvinced about the former, (i). The claim of “insufficent mental capacity” seems to arise rather often and, like a flag of convenience, be run up the flag-pole on demand. That smells to me like virtue-signalling and victimhood-signalling. Little angel me. And the snowflakes duly salute. Shame on them.

And I now learn that, even within the Town Hall, I am not the only one to consider the explanation that Councillor DONOHUE-MONCRIEFF may be malingering. Councillor SIDDONS, however, will not challenge her – not because he has not got the bollocks (as MONCRIEFF maintains), but because in my view he knows full well that it would bring his flimsy ‘alliance’ tumbling down around his burning ears.

Meanwhile, the Council Officers will continue in their massive failure of Duty of Care to all concerned. GREENE is not about to go where DILLON wrongly went.

In my view, Councillor DONOHUE-MONCRIEFF should have followed my oft-repeated and heartfelt advice: to take a sabbatical from public life until such time as the pressures of the political bear-pit no longer drive her beyond the pale. It is not too late to do so. She has always declined on the grounds that she needs the money. Nothing crazy about that. It falls squarely into the every investigator’s first rule: Follow the money.

Note: Though I would infinitely prefer not to, I will be dealing with the matter of the ‘leak’ of the ARGOS document in due course; my hand is being forced. I will also be reporting, with all necessary evidence, on the Leader’s latest demonstration on how to open a big mouth before engaging a small brain.