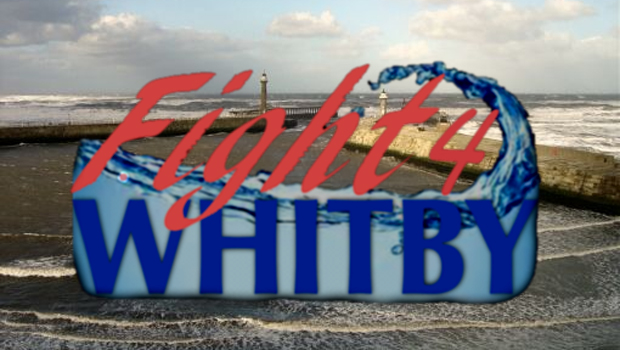 An Open Letter from the Fight 4 Whitby Group, raising seventeen questions for SBC Leader Councillor Derek BASTIMAN [Con.] regarding the deplorable negligence of the Whitby Piers. Any coherent answers will be published in due course.

The Highpoint-Rendel report in 2002 concluded that the main Whitby Piers had a residual life of less
than 10 years. Since that date, the consequences of a breach or collapse of the Piers have worried
the townsfolk of Whitby. As Cllr. Plant told the Yorkshire Post in 2014 “The work must be done – we
cannot put the future of Whitby at risk which is what would happen if the piers are not renovated.”
Despite SBC being at all times fully aware of the severe risks involved, no significant repairs have
been carried out to the Piers over the past 15 years – with the exception of the emergency repairs to
the landward end of the East Pier Extension which was on the verge of imminent collapse.
The risks posed by the repeated postponements of the renovation works raise such a level of
concern that we consider the people of Whitby have the right to be made fully aware of the current
situation. Consequently, we advise you that this is an open letter, with copies to the media.

Repairs to the East and West Main Piers.

Over the years, the scheduled date for starting the work has been pushed ever further into the
future. The most recent postponement now contemplates starting the work in 2019/20 – some 17
years after SBC were first warned that the Piers could have a life expectancy of less than 10 years:

The £4.8 million grant from the Environment Agency was awarded for repair works to start in April
2015 and be finished by May 2017. The grant application, submitted by SBC in Nov. 2012, stated
that it was not possible to delay the works on the Main Piers beyond this timescale.

Ø QUESTION 1 Why did the works not start in 2015, as agreed with the Environment Agency?

The Whitby Coastal Strategy 2, adopted by SBC in 2012, recognised the critical importance of the
Whitby Harbour structures to the overall flood and coastal defence system across the wider Strategy
frontage, as well as directly to the harbour itself.

A recent SBC report (17/71. 23 Mar 2017) stated that SBC has the ability but not the duty to carry
out coastal protection works under the Coastal Protection Act 1949. However, Whitby Piers are
essential Harbour structures as well as Coastal Defence structures. As the Statutory Harbour
Authority for Whitby Harbour, SBC does have a duty to maintain harbour structures and facilitate
safe use of the harbour. It also has a duty of care against loss caused by the authority’s negligence.

Ø QUESTION 4 Would you please confirm that the SBC Risk Assessments for the Whitby Piers
Refurbishment project will henceforth include the risks resulting from SBC not meeting its
duties as the Statutory Harbour Authority?

The SBC grant application to the Environment Agency in 2012 estimated that if no action was taken
(the ‘Do Nothing’ option) and should the Piers and Extensions fail, the damage to property, tourism
& amenity, loss of historic environment, loss of harbour function, etc. could amount to £129 million.

Ø QUESTION 5 Would you please confirm that SBC’s Insurance reserves are sufficient to
cover any loss of life or damage to vessels and property resulting from a breach / failure of
the Piers and Extensions, which was attributable to SBC’s negligence in maintaining the
harbour?

Funding for the Repairs to the Main Piers

SBC adopted the Whitby Coastal Strategy 2 in July 2012 in the full knowledge that the Whitby Piers
project would not be eligible for 100% grant funding and that “SBC as the major beneficiary will be
required to contribute £3.7m towards the design and construction of this first phase to allow the
scheme to progress.”

SBC applied to the Environment Agency for a grant of £4.8m towards the cost of the remedial works
to the Main Piers. The application stated that “SBC have secured a contribution of £1,501k for the
design and construction of the first phase of the scheme (Main Piers). SBC have also allocated an
additional £2,209k for inflation, and to cover the risk contingency above the 50%ile level.”

Ø QUESTION 6 For what reason has the committed contribution of £1.5m not been included in
the SBC budget since the grant of £4.8m was formally accepted in 2014?

As the Statutory Harbour Authority, SBC is required to comply with local harbour legislation.
For Whitby Harbour that is the Whitby Urban District Council Act 1905, which requires that all the
monies generated by the Whitby Harbour undertaking be reserved exclusively for the maintenance
and development of the harbour. Given the periodic requirement for extensive repairs to the Piers
over the centuries, it appears ironic that SBC has not respected an Act of Parliament which was
specifically designed to avoid any future funding crisis in respect of repairs to Whitby Harbour and to
the Piers in particular.

Ø QUESTION 7 Why has SBC not complied with the requirements of the 1905 Act?
Ø QUESTION 8 Why does SBC consider that it can ignore its statutory duties?
Ø QUESTION 9 Would you please provide a detailed list of the income generated since 2012
from the car parks and all other assets on Whitby Harbour land?

Monitoring the Condition of the Pier Extensions.

SBC’s engineering consultant , Royal Haskoning, recommended in 2009 that rectification of the High
Priority defects on the pier extensions (void filling and new scour protection works) should begin in
April 2011. This did not happen.
Following the emergency repairs to the huge void on the landward end of the East Pier Extension, in
2010/11, Royal Haskoning issued a further report In May 2012. In order to give higher priority to the
works on the Main Piers, they advised that it could be possible to defer the start of the remaining
void filling and scour protection works on the Extensions until 2032.

However this relaxation came with two conditions:

The 2009 Royal Haskoning report highlighted that immediate repairs were required to the metal
ladders on the East Pier Extension, which had missing rungs and “corrosion to an unsafe level.”
Similarly ladders on the Main Piers were condemned because of rotten timbers and loose fittings.
Repairs were also required within 5 years to the significantly corroded wire rope rails around the
lower decks of both pier extensions. Royal Haskoning warned that all of these defects could cause
“severe injury, potentially fatal.”

Ø QUESTION 16 Has SBC rectified all of these potentially life-threatening defects?
Ø QUESTION 17 If some of these defects have not been rectified, almost 8 years after the
report was issued, would SBC please provide a full explanation and justification for their
inaction?

The Risks Facing the People of Whitby.

Both the main piers and the pier extensions are riddled with defects. However, information in
reports compiled by Royal Haskoning provides an insight into the seriousness of the problems with
the Piers:

The stone walls and the stone slab /concrete decking of the Main Piers depend for their
support on sound, intact and well-consolidated stone fill material. Royal Haskoning advised
that in 2008 there were 12,000 cubic metres of voids within the stone fill material of the
Main Piers. Thus 10% of the total volume of the fill material was missing – and further loss is
likely since 2008.

The solid concrete Pier Extensions are protected against scour, the creation of voids and the
risk of collapse by sheet steel piling, backed with concrete. The Pier Extensions shield the
seaward ends of the Main Piers from the full brunt of wave action. In 2008, 32% of the
680m of steel sheet piling around the Extensions was found to be extensively corroded,
perforated and requiring replacement. Some 75m were replaced during the emergency
works, leaving 21% still to be replaced – plus whatever further deterioration has taken place
over the past nine years. On-going monitoring of the condition of the Extensions is not an
optional extra.

Perhaps Cllr Bastiman, SBC should reflect on the possible dire consequences that these repeated
delays and inaction pose for the people of Whitby: possible collapse/ breach of the piers – risk to
human life – increased flooding and erosion – endangering people’s livelihoods – damage to possibly
500 properties – closure of harbour businesses – closure of the marina – damage to heritage sites –
possible relocation of the lifeboat service – loss of a harbour of refuge – decline in tourism – damage
to the environment – and the major loss of sand from the beach between Whitby and Sandsend into
the harbour.

This letter contains 17 specific questions. We would very much appreciate a prompt reply giving 17
specific answers.

Even more so, the people of Whitby and our millions of visitors would appreciate some very prompt
remedial action by SBC.

On behalf of Fight for Whitby