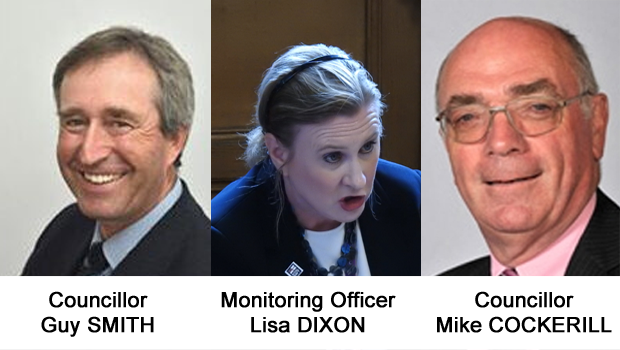 On 2022, an article under my by-line entitled “The Stench from the Pool” was published in the North Yorks Enquirer:

Following a letter of complaint to Enquirer editor Tim THORNE, I find it incumbent upon me to issue a correction and apology to SBC Councillor Guy SMITH [Y.C.I.A.].

I unreservedly apologise to Councillor SMITH and thank him for setting straight my otherwise unblemished record for accuracy. I am sorry, Guy.

Councillor SMITH’s complaint to the Enquirer reads as follows: 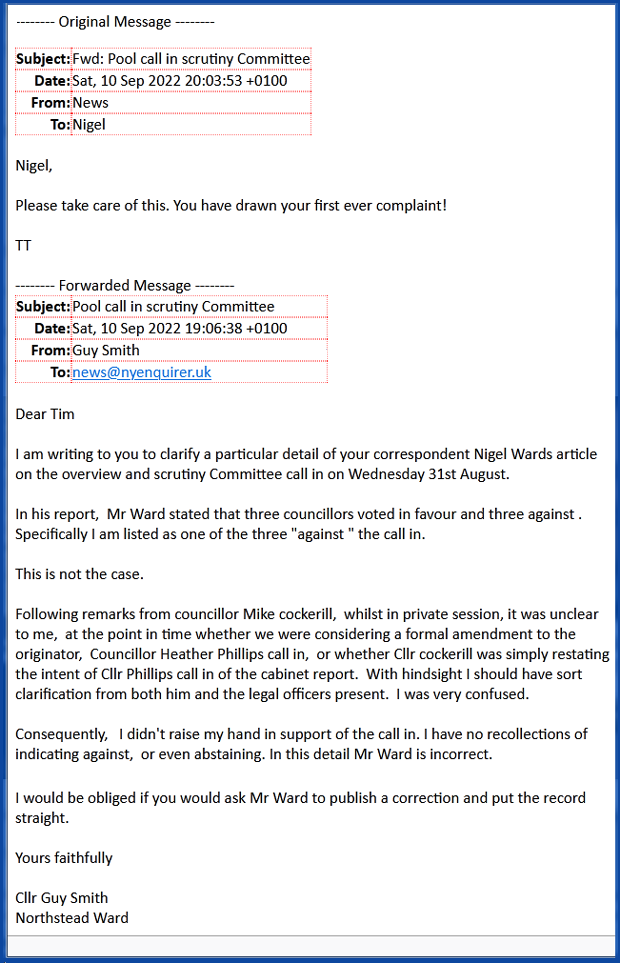 The following extract from my article “The Stench from the Pool” is reproduced below.

Underlined in red is my erroneous assertion that Councillor SMITH was one of three Councillors who voted AGAINST the call-in. 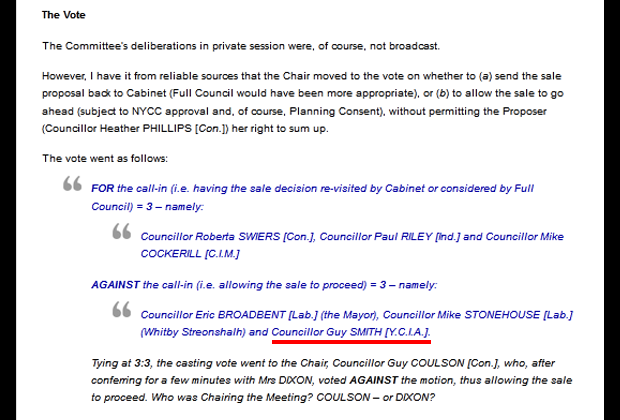 I sincerely hope that Councillor SMITH will accept my apology and correction and I have written to him under separate cover formalising my apology.

Given that the Council persists in its ludicrous “email interception” policy, I can only hope my apology eventually reaches Councillor SMITH . . .

However, beyond setting the record straight for Councillor SMITH, I believe I also owe it to readers to explain the consequences of Councillor SMITH’s assertion that he voted neither FOR nor AGAINST the call-in – nor did he ABSTAIN.

Readers who follow the machinations of Scarborough Borough Council will immediately recognise that without Councillor SMITH’s vote AGAINST the call-in, the call-in should have been UPHELD – meaning that the Decision to proceed with the sale of the site of the former Indoor Swimming Pool and the adjacent carpark should have been sent back to Cabinet (and, perhaps, subsequently to Full Council) for reconsideration.

Further – and because the voting procedure seems to have deviated from the constitutional requirements (an event known as a “procedural impropriety”) – the Cabinet Decision to sell the land under the terms approved by Cabinet is susceptible to Judicial Review – an appeal to the Court to overturn an erroneous decision on the part of the Cabinet.

It is unclear whether this departure from procedure during the vote was an error on the part of O&S Chair Councillor Guy COULSON [Con.], or whether the blame lies with the Officer who advised him – Mrs Lisa DIXON, Director of Legal & Governance and Monitoring Officer.

Regular readers will recall that this is not the first occasion upon which Mrs DIXON has been accused of ‘mishandling’ a vote.

The Scarborough News covered the fiasco of the vote on whether or not to review the ARGOS ‘regeneration’ project in an article entitled “Review into Scarborough Council’s £22m scheme for old Argos building set to go ahead after dramatic vote”, published on 7th September 2021.

Within that article, statements attributed to Mrs DIXON aroused both mirth and anger – the mirth arising from Mrs DIXON’s claim to have misheard due Councillor Alf ABBOTT [Con.] to “an ear infection” (when, in fact, it is Councillor ABBOTT who is hard of hearing); the anger arising from the widely-held view that Mrs DIXON was seeking to assure the administration’s preferred outcome by any available means. If the latter, she failed.

I covered these events in an article entitled “ARGOS: Out For The Count?”, published the following day, 8th September 2021 – exposing in great detail the shameless chicanery over the vote. My article concluded with a legislative and constitutional analysis by Enquirer occasional contributor, Andy STRANGEWAY, campaigner and former East Riding of Yorkshire Councillor, who untangled the mess in greater detail in an article here on the Enquirer entitled “Lisa Dixon Attempting Red Herring”, published on 9th September 2021.

Errors in counting votes may occur once in a blue moon. However, the law recognises what is know as a “pattern of behaviour”. Now that we have Councillor SMITH’s testimony that the Overview & Scrutiny vote was also ‘mishandled’, one may well imagine that the prosepect of a successful Judicial Review are significantly enhanced.

The matter of “procedural impropriety”, alas, does not end here.

I believe it is a matter of public interest that the disclosures made by Councillor Mike COCKERILL, Group Leader of the Cluster of Independent Members [C.I.M.] – which both the Monitoring Officer and her Deputy, Ms Carol REHILL, were so anxious to conceal from press and public scrutiny – are revealed here in the public domain.

Following his intervention at the O&S meeting, Councillor COCKERILL was away for a short while. Upon his return, he entered into the following correspondence with Deputy Monitoring Officer Carol REHILL:

As can be seen, Ms REHILL has made no attempt to deal with Councillor COCKERILL’s concerns; his questions remain unanswered.

I believe I can predict, with some confidence, that the cries of “CORRUPTION!” will continue reverberate through the Council Chamber until such time as a diligent external investigation, ideally by the North Yorkshire Police (or some other institution with comparable investigatory powers) establishes how and why a strong and competive bid, from a long-standing partner of the Council (BT), for the site of the former Indoor Swimming Pool was ignored for over three years.

Meanwhile, I repeat my view that Mr Nick THOMAS MBE must be wondering what kind of a deal he has been drawn into.

All in all, Councillor Guy SMITH’s determination to have his position publicly addressed can only be seen as highly commendable.

What remains is to see which of our elected members will have the courage and integrity to challenge the ‘mishandled’ vote . . .