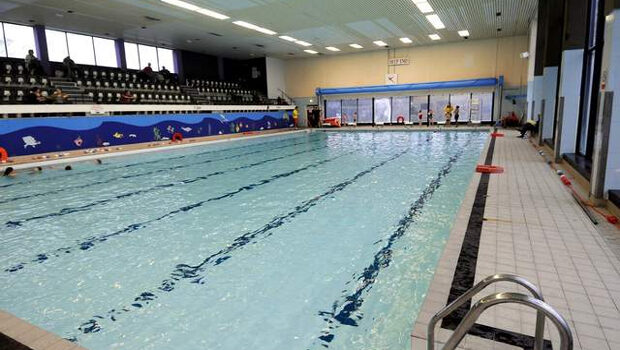 Readers may have encountered an article published on the ThisIsTheCoast (TITC) website on Monday 15th August 2022 which asserted that Scarborough Borough Council had voted unanimously in favour of approving the sale of the site of the former Indoor Swimming Pool (built by public subscription in 1972, derelict since June 2017, and now demolished), to Nick THOMAS MBE, for the purpose of building a 100-room four-star hotel and adjacent carpark.

This came as a considerable surprise to me. As a keen follower of Council activities, I was sure (and, having since checked, I was right) that Full Council has NEVER been given the opportunity to vote on the matter – unanimously or otherwise.

Yet according to TITC, the deal is done and Cabinet Portfolio Holder for Neighbourhoods Councillor Tony RANDERSON is impressed and delighted. 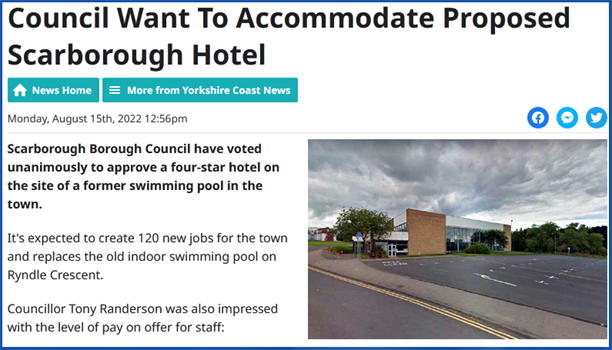 The truth behind TITC’s erroneous assertion is that the deal has NOT yet been done because, in point of fact, it has been called in and will be addressed by the Council’s ‘Places & Futures’ Overview & Scrutiny Committee on Wednesday 31st August at 2:00pm. at the Town Hall (and, one would hope, on the Council’s YouTube Channel).

The call-in – Proposed by Councillor Heather PHILLIPS [Con.], Seconded by Councillor Clive PEARSON [Con.] and supported by Mike COCKERILL [C.I.M.], Phil TRUMPER [Con.] and Bill CHATT [C.I.M.] – was lodged on Thursday 28th July 2022 (the day of the Extraordinary Meeting at which the Vote of No Confidence in YCBID’s governance arrangements was carried unanimously).

This was EIGHTEEN DAYS before the TITC article was published.

A further TEN DAYS before that, on 18th July 2022, SBC published the following Press Release, making it clear that the matter was addressed by Cabinet – not Full Council:

One can only conclude that the Council neglected to mention the call-in – either to TITC or to Councillor RANDERSON. 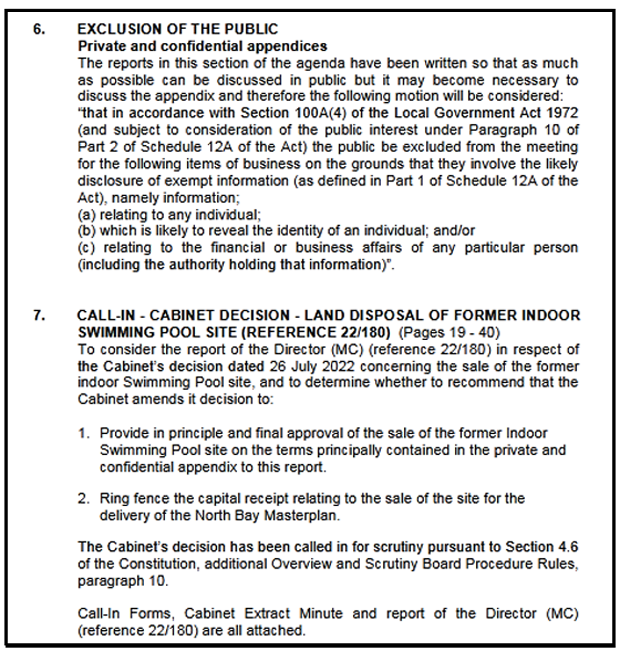 As can be seen from the above extract from the Scrutiny Committee’s Agenda (Items 6 & 7), the matter will be addressed in camera (i.e. with press and public excluded from the Committee’s deliberations), which probably explains why the true state of affairs seems to have been withheld from TITC – yet another example (if another were needed) of the “openness and transparency” that Leader Councillor Steve SIDDONS [Lab.] promised would be the hallmark of his administration.

The Cabinet Extract Minute and the Report of the Director (MC) – signed off by Marc COLE, authored by Alex RICHARDS (Project Manager) and Carol REHILL (Deputy Monitoring Officer) referred to at the foot of the Agenda, are available here and here, respectively.

Readers will recall that Commercial Director Richard BRADLEY was happy to pay £14M of ratepayers’ money for the 116-room St Nicholas Hotel (Travelodge).

Is £1M really the best price available for the swimming pool site for a 100-room new-build, with parking? No wonder it has been called in!

Worse yet, I can confirm that Councillors had been attempting – unsuccessfully – to obtain the background papers for weeks and finally succeeded only last Thursday 18th August 2022 – and then only after Complaints were lodged with outgoing CEO Mike GREENE.

I can also confirm that there has been a institutional determination to conceal the details from members and this is now under investigation by – wait for it – Carol REHILL.

The call-in itself may be no close call. Consider the membership of the ‘Places & Futures’ Overview & Scrutiny Committee: 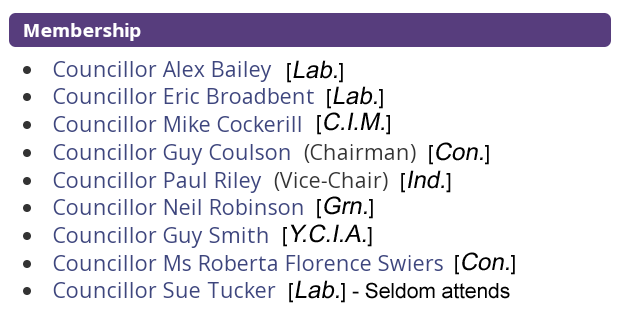 I would anticipate that the two Conservatives, the C.I.M. member and the Y.C.I.A. member will all support the call-in – i.e. four in favour of the call-in, thus blocking the sale of the site.

The Independent, the Green and the Labour members are certain to oppose – i.e. a possible five against the call-in – i.e. five in favour of the Cabinet Decision to proceed with the sale for a paltry £1M.

Judging by the extremely vocal opposition to the hotel proposal throughout social media, it is safe to say that this would be yet another massively unpopular SIDDONS’ flagship proposal forced through behind a veil, in total disregard of the residents and businesses whose lives and livelihoods stand to be blighted, just like the ARGOS proposal and the fiercely opposed West Pier ‘regeneration’ nonsense. No-one could reasonably claim that this administration has ‘listened’ to residents and businesses.

But not so fast. It is possible that only two Labour members are able to attend without assistance. And the Green member has a mind of his own. Or not, as the case may be. It could pan out 4:4.

This would force a tie – in which case, the Chairman holds a casting vote. The Chairman is a Conservative . . .

All this is as it should be.

But why all the secrecy?

Answers, please, in an unmarked envelope.