Readers are referred to four earlier articles on the subject of SBC’s proposed sale of the site of the former Indoor Swiing Pool (and adjacent car-park) to HQ Hotels, a company in the ownership of Mr Nick THOMAS MBE:

In the briefest terms, the story so far runs as follows:

On 26th July 2022, SBC Commercial Director Marc COLE presented Report 22/180 to Cabinet. Mr COLE was parachuted into the Council with the reputation of being ‘Mister Deal-Broker’ on account of his history of flitting from Council to Council pushing through unpopular projects. This reputation has been somewhat tarnished by his failure to push through the ARGOS ‘regeneration’ deal and the fierce resistance to his plans for Scarborough’s West Pier tourist plaza. He now stands accused of lying by omission.

In his Report – diagonally water-marked with the word ‘RESTRICTED’ on every page – recommending the sale of the Pool site and adjacent land to HQ Hotels, and singing the praises of the HQ offer, Mr COLE neglected to inform members that there had been other expressions of interest in the site. I quote from ‘RESTRICTED’ Report 22/180:

4.2 Consultation on the disposal has taken place with Executive Management Team and the Portfolio Holder for Inclusive Growth.

5.1 The Council has been approached by HQ Hotels to purchase the site of the former Indoor Swimming Pool for development as a hotel and associated car park.

I found this deeply disturbing because I knew of at least three other expressions of interest. They are not mentioned in the Report. Mr COLE does not refer to any other approaches by any other parties.

The minutes of the Cabinet Meeting confirm that Councillor Liz COLLING [Lab.Co-Op.], presenting Mr COLE’s Report, also neglected to mention that there were other expressions of interest. One suspects that she, too, may have been kept in the dark.

Needless to say, in the absence of any mention of any other offers, Cabinet resolved to proceed with the sale to HQ Hotels – with all elected members (except COLLING?) kept in the dark.

At that meeting, Councillor Mike COCKERILL [C.I.M.] challenged the legality of the deal on the grounds that no proper consultation or tender process had been pursued, asserting that at least one other party (BT) had been pressing the Council to do a deal since February 2018.

With only seven members present, the vote FOR or AGAINST the call-in was recorded as tied at three/three, with Chair Guy COULSON [Con.] then exercising his casting vote, thus defeating the call-in four/three and upholding Cabinet’s decision to go ahead with the sale to HQ Hotels. At no time during the meeting did any Officer disclose or concede that there had been other offers.

Again, I was deeply disturbed on account of the absence of any mention of two other approaches (other than HQ and the one alluded to by Councillor COCKERILL) already known to me – four in total. At this point, I could imagine Mr COLE having a little smirk to himself, having finally pushed through a deal.

On 10th September 2022, Councillor Guy SMITH [Y.C.I.A.] complained to Enquirer editor Tim THORNE that I had mistakenly reported that he (Guy) had voted AGAINST the call-in when, in fact, he had voted neither FOR nor AGAINST, nor did he ABSTAIN. I duly apologised to Councillor SMITH, noting that, in the absence of any vote from him, there had not been a tie and therefore the Chair had no right to exercise his casting vote – meaning that the call-in should have carried by three/two in favour.

When I published my apology to Councillor SMITH, I included irrefutable evidence that at least one other developer (BT) had approached the Council over the Pool site, thus confirming the veracity of Councillor COCKERILL’s assertion.

Councillor SMITH now assures me that he has heard nothing from Mrs DIXON or any other Senior Officer acknowledging this extraodinary ‘mismanagement’ of the vote. It appears that the Council intends to disregard democratic procedure and plough ahead with the sale, with: 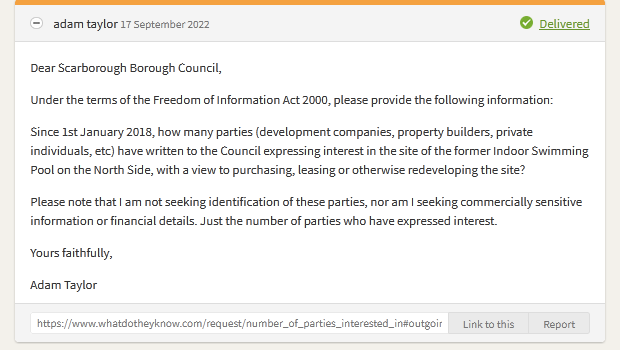 And this 11th October 2022 formal response, from SBC’s Regeneration spokesperson, Ellis COOPER – which must have come as a very unpleasnat surprise to those Councillors who have seen it (i.e. not many). They should take careful note now: 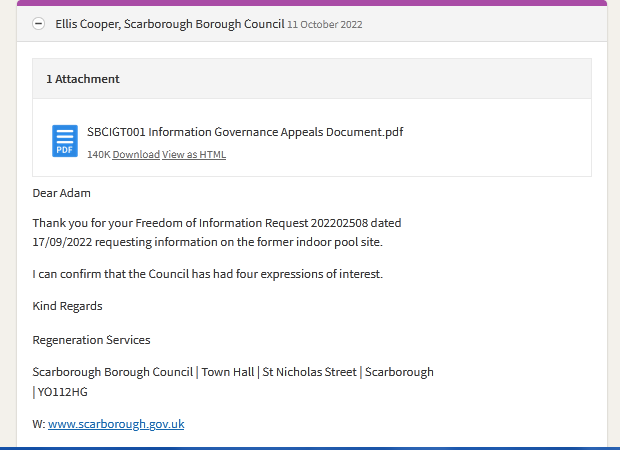 “I can confirm that the Council has had FOUR expressions of interest”.

Well, that FOIA response unequivocally confirms that there were at least four parties making a bid for the site.

I suspect that so can Councillor Mike COCKERILL, who is now pursuing the matter:

Even then, I was astonished to read Deputy Monitoring Officer Carol REHILL’s response to Councillor Mike COCKERILL – subsequently shared to all members:

Unfortunately for Ms REHILL, the four expressions of interest that she has now – very belatedly – owned up to are NOT the same four that I know about. I will return to that after dealing with Me REHILL’s admissions, in the order she presents them:

In any case, I can confirm that I can name two more – one pre-dating the BT overtures (which I have mentioned to no-one) and one other – my ace in the hole.

It would appear from the following email from Councillor Bill CHATT [C.I.M.] to Councillor Mike COCKERILL (copied to all members) that he does share my view:

Thanks for that, Mike
Very interesting. I must say the officers seem to be of selective memory!
This site was not put in the public domain and only one organisation was approved for the site?
It seems 4 different organisations were in fact interested in the site, one you bought to members attention on the day of scrutiny.
We are not even talking about Benchmark who I was sure had an interest in this site?
But when decision are made behind closed doors by officers without members being aware of the facts this can only lead to the good old public being concerned.
I am not sure even Cabinet were aware on the day of all the offers?
As officers said they had informed Cabinet on the day of the Thompson’s Homes interest?
What about the other 2 now reported expressions of interest?
I am so glad this administration is so not going to be like the old administration?
What ever that meant?
The old pool site cost to take down.
I just wonder if this was a Liz Truss decision?
Because I know members were not given all the information or facts at scrutiny.
Put into doubt exactly what we are being told.
Some of the truth but not the whole truth.
Best
Bill

I can also confirm that I have entered into a detailed correspondence with the Rt.Hon. Sir Robert GOODWILL MP [Con.] (Scarborough & Whitby) on this matter. I will, of course, draw his attention to this present article.

This will evidence the fact that our MP is fully “in knowledge” of these goings-on. ‘Plausible denial’ is no longer an option available to him.

I would hope, therefore, that Sir Robert makes his own approaches to Mr COLE and to Councillors PHILLIPS, SMITH, COCKERILL and COULSON – and indeed to all six of the developers who expressed interest in the site – so that any further allegations of “corruption” are openly and transparently investigated and the guilty held to account – as so they should be.

It is unfortunate that the ‘new broom’ which CEO Mike GREENE brought to the Council in 2019 is still in its package. We must console ourselves with the thought that the man inheriting his post has yet to navigate his ship-of-state past the Whitby (and Scarborough) Harbour accountancy fiasco, the Yorkshire Coast BID accountancy problem (with the VAT), and one or two other ‘icebergs’ lurking closer to port (and upon which I look forward to commenting, in due course).

Bon voyage, Mr EDWARDS – the helm is all yours! 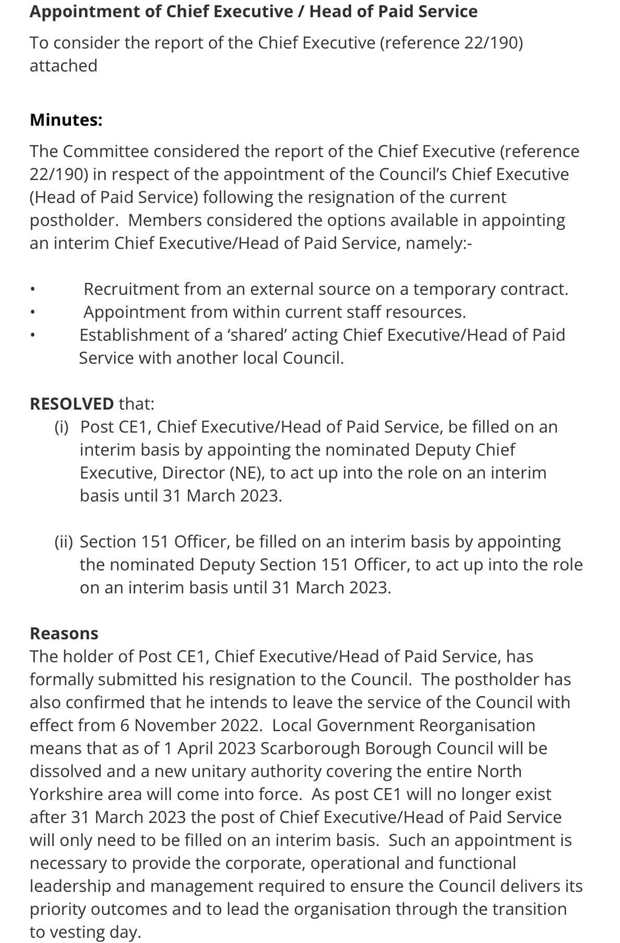