Regular readers will recall the following articles published by the North Yorks Enquirer on the subject of the sale of the Indoor Pool site:

It has been suggested, in these articles, that Mr Nick THOMAS MBE of HQ Hotels – a man who rightfully prizes his widely renowned integrity – might find himself embarrassed by his inadvertent involvement with the manner in which Scarborough Borough Council Officers have handled the proposed deal, particularly in respect of the way in which it was presented to Cabinet and to the ‘Places & Futures’ Overview & Scrutiny Committee. I refer readers to the above links for a definitive account of that sorry saga.

Councillor Mike COCKERILL [C.I.M.] has been instrumental in representing democratic and procedural issues which remain unresolved:

I can confirm – based, initially, on a verbal report from Northallerton – that it is to be ‘understood’ that Mr THOMAS has withdrawn his offer.

The Executive gave particular consideration to:

They must have been reading the Enquirer!

“We were not prepared to debate the specious notion that paying £1,000,000 for a site valued at £318,500 to deliver a flagship asset for Scarborough, was anything but ‘best value’. We therefore withdrew our offer before NYCC could oppose it, and so unfortunately a unique opportunity for Scarborough has been halted by what appears to be a political power play.”

It does not appear to me to be “a political power play”.

Clearly, in view of the likelihood (certainty?) of certain ‘procedural improprieties’ having taken place, any (or all) of the other five interested parties has an almost cast-iron case for Judicial Review (JR). Were such a JR to succeed, it would present an open goal for aggressive civil action against the Council (ultimately, the ‘inheriting’ Unitary Authority, North Yorkshire Council) which could run into millions.

In my view, the County Council has acted most wisely.

However, this should not draw a line under this very distasteful episode. SBC’s Interim Director of Projects & Programmes, Mr Marc COLE, in particular, though not alone, owes us all an explanation.

Council Leader Steve SIDDONS [Lab.] has been reported as stating:

“The way that the new Unitary authority has used its powers has led to a lack of confidence by a major investor.”

In my correspondence with Sir Robert GOODWILL, I have concurred with his view that any seaside Council would do well to welcome a £15M luxury hotel. My issue has been with what I regard as the disgraceful skullduggery surrounding Officers’ negotiation of the deal. Mr GOODWILL understands that – and so does the NYCC Executive.

That viewpoint must be pursued to a just conclusion.

Scarborough Borough Council has now confirmed that its Annual Accounts for the financial year 2020/2021, due for publication on 1st August 2022 and repeatedly deferred, will finally be published – after the conclusion of the Audit Committee meeting on Thusrday 27th October 2022: 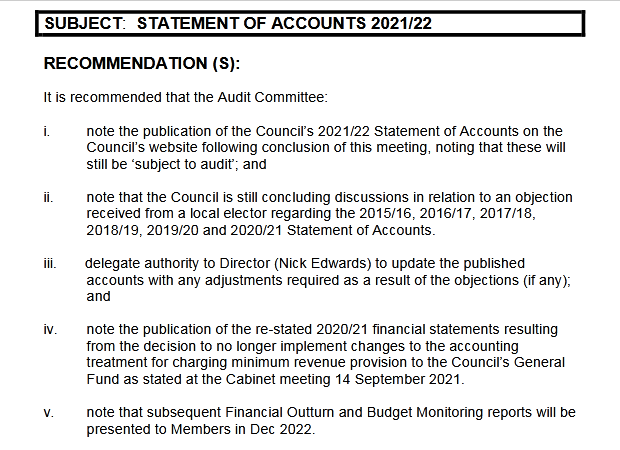 I would confidently anticipate that External Auditor MAZARS has already been put on notice that there will be Formal Objections to the accounts – an entirely unacceptable state of affairs applicable to only three authorities out of four-hundred-and-plenty. This has been going on since 2015/16 of the Whitby Harbour revenue and will surely start now with Scarborough Harbour.

It should be noted, at Recommendation (iv), that a further volte face on the Minimum Revenue Provision (MRP) accounting procedure is about to take place. Mr Nick EDWARDS seems to have conceded that he cannot pick and choose between accountancy methodologies at will, however rose-tinted it may stand to illuminate his bottom line. 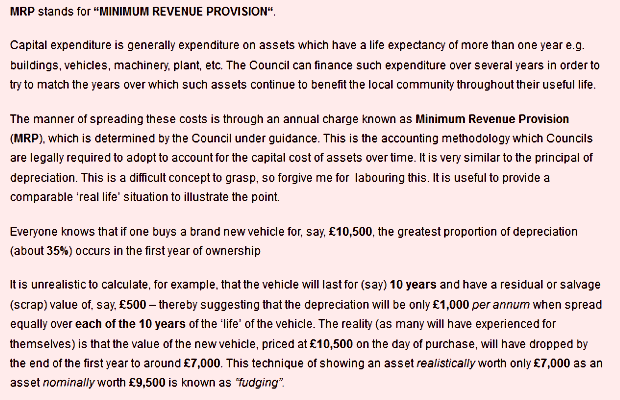 Nevertheless, an overwhelming majority of SBC Councillors will vote to accept the Recommendation of the Appointments Committee and crown Mr EDWARDS the latest and last Chief Executive Officer & Head of Paid Service of Scarborough Borough Council at the next meeting of Full Council on Monday 7th November 2022.

I predict that Mr EDWARDS will experience an exceedingly trying tenure.