Good morning to you.

I write to you seeking clarification to your response, in your capacity as Portfolio Holder for Inclusive Growth, to the Deputy Mayor’s question to the Leader regarding his assertion to Full Council on Monday 24th January 2022 that negotiations with Flamingo Land in respect of proposals for the redevelopment of the former Futurist Theatre site.

You will recall that the Leader (who, by the way, is now being referred to in jocular vein as the Mis-Leader) stated:

This assertion has been publicly challenged by Mr GIBB, CEO of Flamingo Land (“the preferred bidder”), in a statement to local news media with, inter alia, the following assertion:

“Councillor Siddons’ recent comments regarding the Scarborough Council’s continuing to work with Flamingo Land on proposals for the former Futurist site could not be further from the truth“.

Your response to the Deputy Mayor (dated 1st February 2022), in your capacity as Portfolio Holder for Inclusive Growth, is apparently an attempt at providing, on the Leader’s behalf, some semblance of a denial of Mr GIBB’s allegation. It is wholly unsatisfactory, in a number of ways.

To assist you in grasping the thrust of my dissatisfaction, I reproduce (below) your email to the Deputy Mayor. You will note that I have numbered the individual paragraphs in bold red type, for convenience of reference. I will address them in numerical sequence: 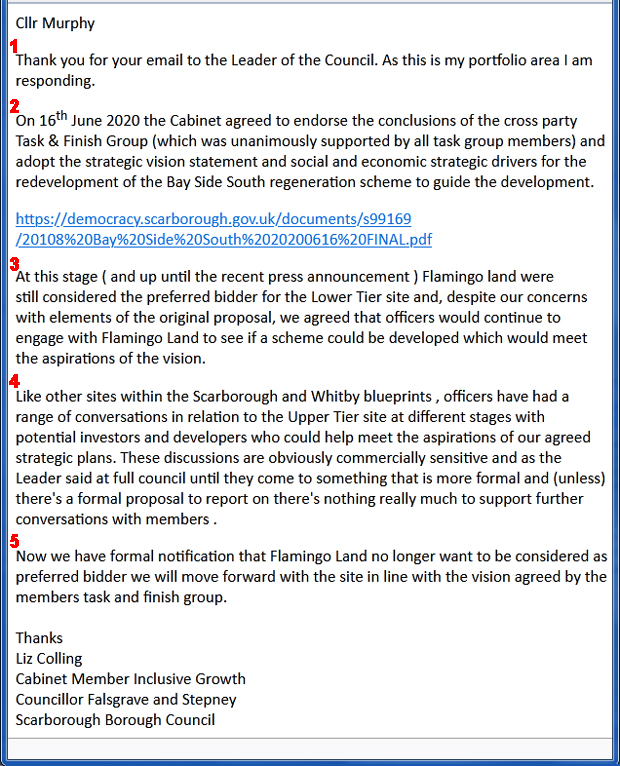 1) This, your opening paragraph, is fundamentally flawed. I will not rehearse the full warp and weft of your Portfolio responsibilities; suffice it to say that ‘Inclusive Growth’ certainly does not – and cannot – include defending the Leader’s assertions. That is entirely a matter for him and it is disrespectful in the extreme – not to say pusillanimous –  that the Leader has placed you in the invidious position of ‘stepping into the dock’ (as it were) on his behalf.

2) Your attempt to mount a defence of the Leader based on a Report by the Commercial Director dated 16th June 2020, itself reliant on an earlier Report dated February 2020 (i.e. two years ago) disregards the fact the the Leader’s statement on 24th January 2022 was framed in the present tense – “Scarborough Borough Council is continuing… etc”.

Thus, reliance on an instruction to Officers two years ago provides no evidence to support the Leader’s present-day assertion. Where is the evidence that Officers ever carried out their instructions? Certainly not in the body of your response to the Deputy Mayor.

3) Whether or not Flamingo Land was “still considered” to be “the preferred bidder” for the Flamingo Land site has no bearing whatsoever on the Leader’s assertion. The Leader’s statement is unequivocal. I repeat once more for your consideration:

Your assertion that “we agreed that officers would to continue to engage with Flamingo Land” does not speak to the core issue of whether it is Mr GIBB who is the truthful party in the present dispute – or the Leader.

4) Your reference to Officers engaging in “a range of conversations in relation to the Upper Tier site” (i.e. the 60s block) is not only a shameful red-herring, it is disingenuous of you to have withheld the information that one of these “conversations” is with a leading hotel group and may yet include the Town Hall itself. Whether or not these “conversations” are “commercially sensitive” or not does not speak to the core of whether it is Mr GIBB who is the truthful party in the present dispute – or the Leader – though why you consider such “conversations” to be nothing “to support further conversations with members” tells a great deal about the practice and policy of the present administration in regard to secrecy.

5) Again, whether or not the Council accepts that Flamingo Land chooses not to engage with the Council on the subject of the former Futurist site in no way supports the Leader’s assertion that, as of 24th January 2022, the Council was “continuing to work with Flaming Land…”.

In the simplest terms, if it is the case that, as of 24th January 2022, the Council was engaging with Flamingo Land in respect of the former Futurist site – and if the Leader can produce hard evidence that such was the case, then members may, albeit reluctantly, determine to accept his word.

Until then, Mr GIBB’s allegations remain unaddressed and members are left to speculate on the likelihood that the Leader has branded himself a liar.

In short, your email to the Deputy Mayor may have found its place in the world only if there should arise another COVID-induced rush on toilet paper.

Having dispensed with the substance of your response, on the Leader’s behalf, to to the Deputy Mayor, I now turn my attention to its stylistic aspects.

You are aware that a great deal of correspondence passes through my hands. In particular, I am thoroughly familiar with your writing-style. Your response to the Deputy Mayor bears scant resemblance to earlier emails from you and thus leads me to believe that you are not its author. I conclude that it was drafted, in whole or in part, by an Officer – and very probably an Officer already shown to have lied.

In order to establish the truth or otherwise of my conclusion, I have submitted a Freedom of Information request (which also remains unacknowledged). I rely on you, in a spirit of “openness and transparency” to instruct your FOI Officer to expedite an exhaustive response, redacted as necessary (but only as strictly necessary), as soon as is practically possible. 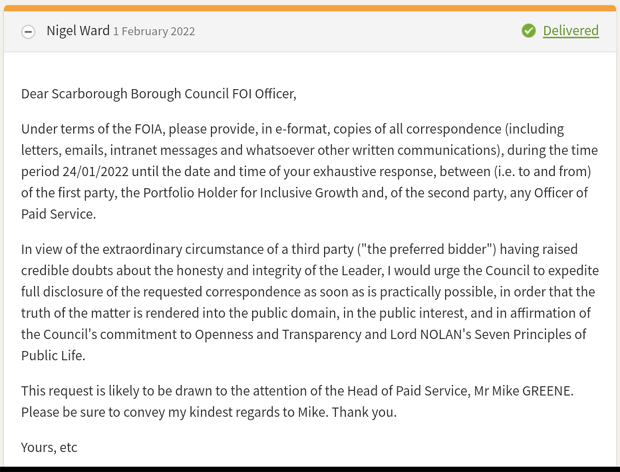 Coupled with the fact that the Leader is, amongst other members of the Lab./Ind. “alliance”, under investigation for failure to disclose an interest in a property acquisition, by way of Leader’s Urgent Decision, this present contention over the Leader’s honesty raises the spectre of Disrepute.

Clearly, breaches of the law by members is very much a matter of public interest. An examination of social media sources, throughout the Borough and beyond, suffices to demonstrate that the good standing of Scarborough Borough Council has been all but totally negated.

One member of the Lab./Ind. “alliance” is behind bars and many hold that only the Leader’s intervention has prevented a Portfolio Holder from prosecution for offences far more serious than super-glue abuse.

I assure you, I will get to the bottom of this sorry foray into the realm of Disrepute: 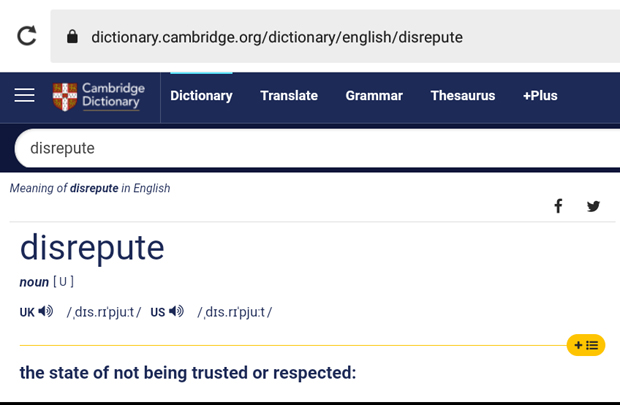 Now place this into the context of the following posting on the Scarborough News Facebook page, which leads with the following quote:

“It’s one thing to be involved with eco-hooligan groups, but it’s another thing to be bringing the borough into disrepute”. 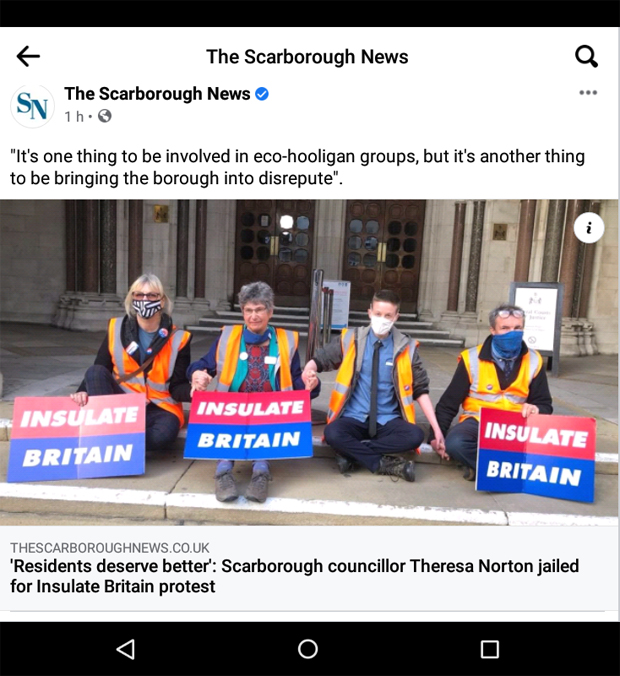 It would appear to me that few barristers would relish the prospect of standing before a Judge and arguing that the Council is trusted and respected. To coin a phrase, nothing could be further from the truth.

Certainly, Full Council must be convened to debate and resolve a path to recovery.

Finally, I wrote to the Leader on 22nd December 2021 (by private email, thus evading the ludicrous interception policy) asking him to confirm the authenticity of an attached document necessary to the completion of an article examining his business acumen and commercial integrity. He has not responded. Perhaps you should ask yourself – and him – why not?

You may seek refuge in the fact that you are a member not of the Labour Party but the Labour & Co-Operative Party.

On that basis, and on a note of personal goodwill, I would urge you to distance yourself from this travesty of democratic representation led by rogue Officers, charlatans, bumbling fools and liars at the very earliest opportunity. An election looms . . .