I can now unequivocally confirm that, in consequence of the failure by Councillor Steve SIDDONS [Lab.] to declare an interest or secure a Special Dispensation legitimising his Leader’s Urgent Decision, dated 17th December 2021, to acquire, on behalf of the Council, the shop and flying freehold maisonette situated at 1 St Helen’s Square, a large number of opposition Councillors and one Alderman have lodged Formal Complaints.

The Leader’s Urgent Decisions Notice is reproduced below: 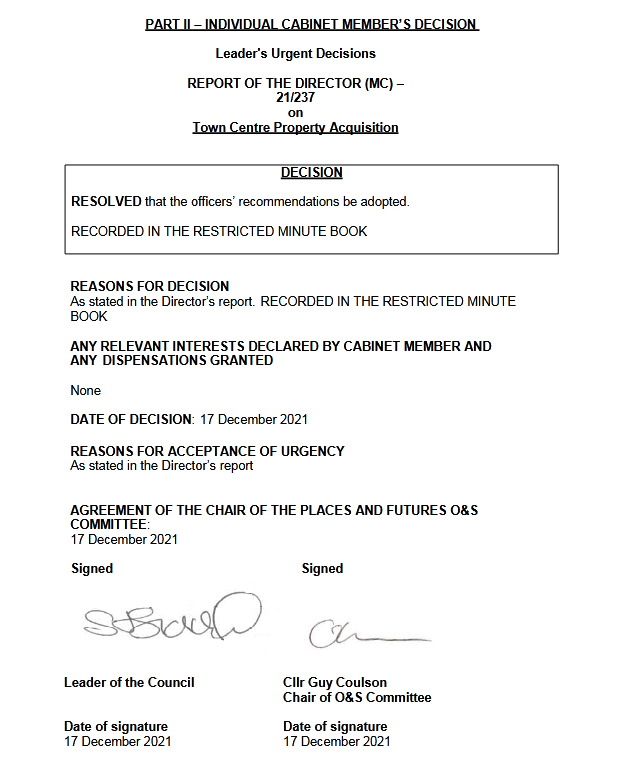 Worthy of repetition and of particular note is the section dealing with Declararations of Interest and Special Dispensations:

These Formal Complaints (of which I reproduce just two, by way of example) are based on the official record that the Leader failed to register a disclosable personal and prejudicial interest insofar as the vendor of the maisonette is personally know to him, having served alongside him as a Scarborough Borough Councillor during the 2015-2019 Council cycle.

Further, according to Council sources, the vendor was during this same period the Secretary of the Council’s Labour Group and the Scarborough & Whitby Labour Party. The legal requirement to do so is to prevent those in power from giving the appearance that impropriety has taken place.

The Formal Complaints also encompass four of the Leader’s Labour colleagues who each failed to make the equivalent Declarations at the meeting of the Planning & Development Committee on 9th December 2021, when an Application to demolition the above-mentioned property was considered and granted. The four are: Councillor Subash SHARMA, Councillor Rich MAW, Councillor Stuart CAMPBELL and Councillor Theresa NORTON.

The Minutes for the meeting confirm that no Declarations were made in Items 4 & 5 (ARGOS and St Helen’s Square) by any of the four Labour members itemised above, all of whom are listed as having attended: 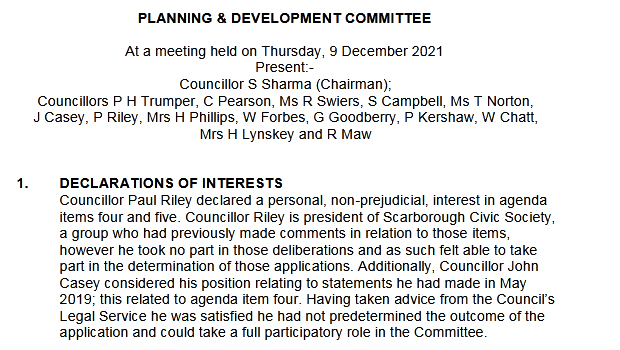 Returning to the Formal Complaints:

Alderman Norman Murphy here. I hope you are well.

I am writing to ask you to direct your attention to the information that is presently circulating on the internet concerning the apparent failure by four Labour members of the Planning Committee to declare personal and prejudicial interests in respect of the application to demolish the shop and maisonette at the Newborough end of St. Helens Square.

You may not be aware that I attended the Planning meeting. I can confirm that it is true that Cllrs Shama (Chair), R Maw, Campbell and Norton did not make any declarations. I served with one of the owners,  Mr Paul Cross, formerly Cllr Paul Cross, between 2015 and 2019. If memory serves, former Cllr P Cross was for a time secretary of the SWLP. I do recall that he had something to do with the SWLP website. I think it is reasonable to assume that the four members named above must have been acquainted with him in that role.

It has always been my understanding that when the Council has dealings with someone, members who are acquainted with that person must declare their acquaintance, relationship or friendship. Indeed, when I was an elected member I served on the planning committee and we received a presentation from the then chief executive of SBC, John Trebble, and his benchmark of acquaintance was if you know an applicant in any way you must declare your acquaintance it would then be up to legal officers attending the meeting to advise. This criteria especially applied to any Planning matter and especially when the Council was intending to make a payment to that person.

My understanding is that this legislation is intended to ensure the propriety of the Council’s actions and prevent any “old boys” preferential treatment that “the man on the Clapham omnibus” may view as suspicious. In short, the Council must not only act with the utmost probity; it must be seen to do so.

This brings me to the Leader’s Urgent Decision to purchase the maisonette at the Newborough end of St. Helens Square from Mr Paul Cross at a price which many consider to have been considerably above market value.

I served with Cllr Siddons from 2015 to 2019. It is beyond the bounds of probability that Cllr Siddons and former Councillor P Cross are not well known to one another. And yet the leader’s Decision notice confirms that no interests were declared by the leader and no special dispensation was recorded.

I cannot avoid the conclusion that “the man on the Clapham omnibus” could easily suspect that something untoward has taken place. I do know that this is a very serious matter and should be treated as such.

Please take my comments into consideration. I am more than willing to give evidence before any impartial enquiry.

I acknowledge receipt of your standards complaints as detailed below, received on 13 January 2022.

Second Example (on behalf of the entire Conservative Group)

Good morning,
I am in receipt of correspondence from Alderman Murphy regarding none disclosure of interest by members of the Labour Group both at the recent Planning meeting (Argos application) and Cllr. Siddons urgent decision regarding the purchase of a property(s) in St Helens Sq, Scarborough.

Less than 3 years ago we had to listen to Cllr Siddons lambast the previous administration in how they were not inclusive, withheld information, etc. etc.Come the day of the great “ messiah”, we were going to be overloaded with openness and transparency, inclusivity and this administration being whiter than white, well what have we had nothing, Labour Group members not declaring an interest, Cllr Siddons doing whatever he thinks he can get away with, a leader of Council is supposed to set an example, well his latest decision has certainly set an example, a poor one.

Please take this as a formal complaint by the Conservative Group on grounds identified in this email and that of Alderman Murphy.
Yours most sincerely Councillor Derek J Bastiman.

I have also written to Deputy Monitoring Officer Carol REHILL, in the following terms:

I can confirm, having been present at the Planning & Development Committee meeting of 9th December 2021, that no declarations were made by members of the Labour Group in respect of 1 St Helen’s Square.

Though others have been acknowledged, Ms REHILL has not responded to me. One could easily conclude that Officers are not enthusiastic about receiving evidence to confirm Councillors’ accusations. As I reported recently, the Monitoring Officer has a duty to protect:

Of the four Councillors other than the Leader, the allegations against Councillor SHARMA are doubly serious because, at a meeting of the Overview & Scrutiny Board on 8th July 2020, Councillor SHARMA did indeed declare his acquaintance with the then-owner of 1 St Helen’s Square and is thus unable to claim that he was not aware that a declaration was required:

To add to Labour’s woes, Highways England has now confirmed (Friday 14th January 2022) that it intends to continue to pursue legal action against Insulate Britain activists who flouted a High Court Injunction prohibiting them from obstructing highways and motorways:

Yes, we are continuing to take action against those who have breached the SRN injunction.

According to the Telegraph, Councillor Theresa NORTON is one of those arrested (4 times!) for breaching the Injunction.

It goes without saying that these Formal Complaints have arisen at the worst possible time for Councillor SIDDONS and his followers, since the Leader is to face a Vote of No Confidence (VoNC) on Monday 17th January 2022, at 2:00pm. The meeting is to be held ‘virtually’ (via Zoom, live-streamed on the Council’s YouTube Channel) and thus will be a recorded vote.

Non-declaration of interests by Labour Councillors in Yorkshire and the North East was at the root of the POULSON scandal of the ’60s and ’70s, which saw 23 officials jailed and the Home Secretary of the day (Reginald MAUDLING) forced to resign. This explains why members are now using the phrase “Sleazeborough Council” in relation to the St Helen’s Square purchase.

To grant consent to demolish 1 St Helen’s Square on 9th December 2021, then pay what several property specialists describe as “well over the odds” to a fellow Labour ‘mucker’ for the property on 17th December 2021, certainly carries the appearance of being somehwat less than in the best interests of the rate-paying public.

It follows that any Councillor supporting the Leader will be placing her/himself on the public record as fundamentally condoning the Leader’s actions (or inactions), and this will add to the firmly-established public perception that this Labour-led administration considers itself above the law.

It is in some ways unfortunate that the Vote of No Confidence has now, in an ethical and moral sense, been pre-empted by a fight to restore the Council’s probity and good standing.

But no suspicion of sleaze should detract from the practical arguments in favour of the motion calling upon Councillor SIDDONS to step down – which are almost too many to list. Here is a brief outline of his Leadership’s principle failures:

Councillor SIDDONS’ Leadership has not been a ‘happening’ affair.

Clearly, nothing but blind faith could persuade Councillor SIDDONS’ supporters to continue to support him in good faith.

His Leadership has been a series of tottering lurches from one embarrassing failure to the next, not least that train-crash interview on the BBC – cringeworthy even after several viewings:

I would be grateful to readers who wish to support a return to something approaching acceptable standards of governance by emailing this link to this article to Councillors:

. . . reminding them of the Seventh NOLAN Principle: