Out of sight and earshot of the public, Opposition Councillors are raising hell about the conduct of SBC’s Monitoring Officer, Mrs Lisa DIXON, in respect of her refusal to release five Reports on the outcome of the five External Investigations into allegations raised in Formal Complaints concerning serious potential breaches of the Localism Act 2011, by five Labour SBC Councillors. (For a full decription of the circumstances, please re-visit my article “5 Lab. Cllrs. – Formal Accusations Lodged” – pub. 15/01/21).

What is even more disturbing is that the Constitution requires such matters to be concluded within three months; these breaches took place in before Christmas, four-and-a-half months ago.

Publication of the Reports (completed last week) is scheduled for mid-May, a month-and-a-half beyond the prescribed deadline.

Mrs DIXON will, of course, have persuaded Standards Chair Councillor Simon GREEN [Con.] and the Independent Person to toe the line in support of her decision:

Mrs DIXON would no doubt claim that to release the Reports on the eve of the NYCC elections might impact on the way electors vote, which may or may not be true. However, there is no valid reason to withhold the Reports on those who are not Candidates (Steve SIDDONS, Theresa NORTON and Stuart CAMPBELL) – other than the risk that the Candidates may be seen to be ‘guilty by association’. The accused, after all, are all Labour Councillors.

The counter-argument is that, IF the two accused Candidates have been exonerated by the External Investigator, THEN they are surely entitled to know that, both for their own peace of mind, and to thereby allay any suspicion which may, after so long an investigation, have accumulated in electors’ minds – “no smoke without fire”, and all that . . .

Perhaps unwittingly, Mrs DIXON has denied these two Candidates the opportunity to clear their names.

The assumption presents itself, therefore, that the Reports may have not exonerated the accused.

In short, on the one hand, no harm can come from the disclosure of their innocence (if that is what the External Investigator has concluded).

On the other hand, disclosure of their guilt would certainly stand to jeopardise their prospects of election – and quite rightly, many would argue. Nobody wants to elect a dodge-pot. Surely this is a matter of public interest?

Mrs DIXON’s decision is, therefore, not only withholding information that electors are entitled to know – and it also leaves potentially unnecessary question-marks hanging over two Labour Candidates.

How does that sit with the “openness and transparency” that the Leader promised us when he took office? Then again, the Leader is facing the same charges . . .

Subash SHARMA is a Candidate in the Newby Division:

Candidate Subash SHARMA is one of the five Labour Councillors accused of breaching the Localism Act 2011.

Let me remind readers of how the events leading up to the Formal Complaints unfolded.

The ARGOS proposal was thrown out, but the St. Helen’s Square Application was approved (though the premises are still standing and no demolition preparations are underway).

I attended the meeting, so I can confirm that the Chair of the Planning & Development Committee, Councillor Subash SHARMA [Lab.], remained silent on the matter of Declarations of Interest in any of the Items on the Agenda. Of particular interest is the fact that Councillor SHARMA did not declare his personal acquaintance with the owner of the maisonette at 1 St. Helen’s Square. Making Declarations of Interests is a legal requirement under the terms of the Localism Act 2011. Serious breaches may attract custodial sentences . . .

But this was an extraodinary omission, considering the fact that, at a meeting on 8th July 2020, when the ARGOS proposal was on the Agenda, Councillor SHARMA made great point of declaring an Interest, precisely on account of his personal acquaintance with the owner of the maisonette at 1 St. Helen’s Square, which stands directly adjacent to the former ARGOS building.

By his own admission, Councillor SHARMA and the owner of the maisonette at 1a St. Helen’s Square were sufficiently-closely acquainted as to require Councillor SHARMA to disclose their relationship, which he duly did – very probably on the advice of the Monitoring Officer.

Clearly, in July 2020, Councillor SHARMA was acutely aware of his duty to declare – but he chose to remain silent, for whatever reason, in December 2021, during the extremely high-profile ARGOS meeting. I was there.

This omission would perhaps have passed unnoticed by most Councillors, but for the fact that, eight days later on 17th December 2021, Councillor SHARMA’s Group Leader (and Leader of the Council), Councillor SIDDONS (with whom SHARMA served from 2011-15 and from 2019 to the present day), passed an Leader’s Urgent Decision to purchase, on behalf of the Council, the properties at 1 & 1a St.Helen’s Square.  For the maisonette at 1a, over £104,000 was paid – arguably double its market value (at least, according to contemporaneous estimates by market-leading valuation sources).

Like Councillor SHARMA before him, Councillor SIDDONS [Lab.] did not make a Declaration in regard to his personal acquaintance with the owner of the maisonette at 1a St. Helen’s Square (with whom he served from 2015-19), nor did he seek or obtain a Special Dispensation from the Monitoring Officer, Mrs Lisa DIXON, permitting him to take the Decision without disclosing his personal acquaintace with the owner, with whom he had worked closely for four years or more. (Be it noted, however, that Councillor SIDDONS is not a Candidate in the 5th May elections so, fortunately, he need not concern us here).

Unsurprisingly, the fifteen Complainants took the view that the maisonette transaction was a corrupt act; the phrase “Sleazeborough Council” was bandied about quite freely. Certainly, paying an (undisclosed) close colleague double the market value for his property has all the appearances of corruption. It is reminiscent of the John POULSON affair of the ‘sixties and ‘seventies.

This is not the first time that Councillor SHARMA has been very leniently treated by the Monitoring Officer. Readers may remember that SHARMA was the Councillor who escaped sanction after using the “F-word” in Council. By contrast, opposition Councillor Bill CHATT [C.I.M.] was found guilty of disrespect for using the word “crap” in an email to the Leader commenting on the Leader’s lame excuses for his extreme reluctance to return to physical meetings. Councillor CHATT was ordered to apologise! Another SIDDONS acolyte has been getting away with quite literally threatening murder. Yet another Labour member has escaped sanction, despite serving prison time after glueing herself to the motorway as part of the Insulate Britain movement.

Small wonder that members have expressed ‘concerns’ to CEO Mike GREENE regarding the Monitoring Officer’s apparent bias in favour of members of the administration.

Meanwhile, Subash SHARMA’s principal opponent in the Newby Division is Alderman Norman MURPHY, in whose twenty years of Council experience (he tells me) no more blatant a failure to disclose an Interest has ever arisen.

As one of the fifteen Complainants, Alderman MURPHY is entitled to know if his Formal Complaint has been upheld or rejected – did Subash SHARMA breach the Localism Act or not? Is Norman MURPHY meeting his opponent on a level playing-field? Hmmmm.

When electors ask Alderman MURPHY whether or not Subash SHARMA is innocent or guilty as charged, he cannot safely reply. Because even though the evidence is simple, straightforward and well-substantiated by Council minutes, witnesses and video – and appears to admit no other plausible explanation – it is contrary to the terms of the Representation of the People Act 1983 falsely to malign a fellow Candidate. Truthfully to do so is no problem . . .

Yet without access to the External Investigator’s Report, Alderman MURPHY is as much in the dark as the electors in Newby Division. Conversely, Subash SHARMA is forced to keep electors in the dark, too, because Mrs DIXON has refused to release the Reports. Subash SHARMA cannot proclaim his own innocence, for fear of the potential disgrace and humiliation of a guilty verdict

In my view, the fifteen Complainants can be forgiven for drawing the conclusion the the Monitoring Officer’s refusal to release the Reports is motivated by electoral/political bias on her part, in favour of Subash SHARMA – Labour Candidate, SIDDONS’ acolyte and a leading member of the Labour Group.

Meanwhile, Norman MURPHY is left to hope that electors of the Division will recognise the implications of Mrs DIXON’s determination to ‘cover up’ the outcome. In common with many a past cover-up, this one could well prove to be counter-productive. Much is uncertain.

Of one fact, Newby Division electors can be sure; there are no question marks surrounding Norman MURPHY’s candidacy. 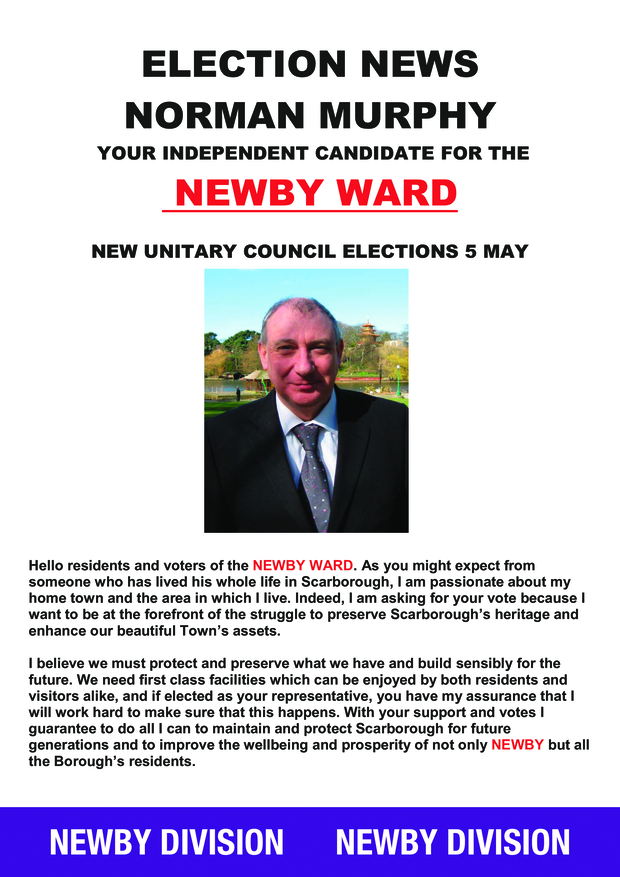 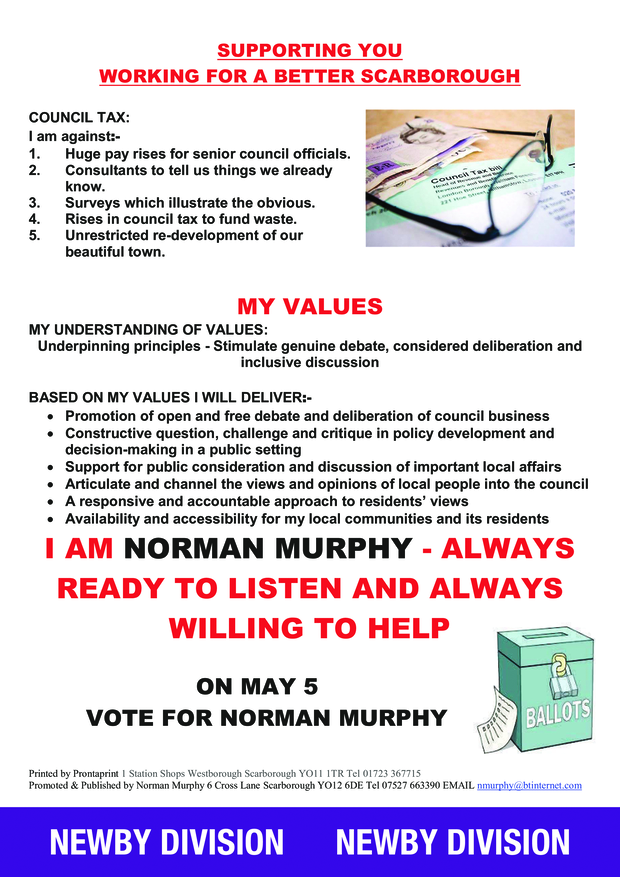 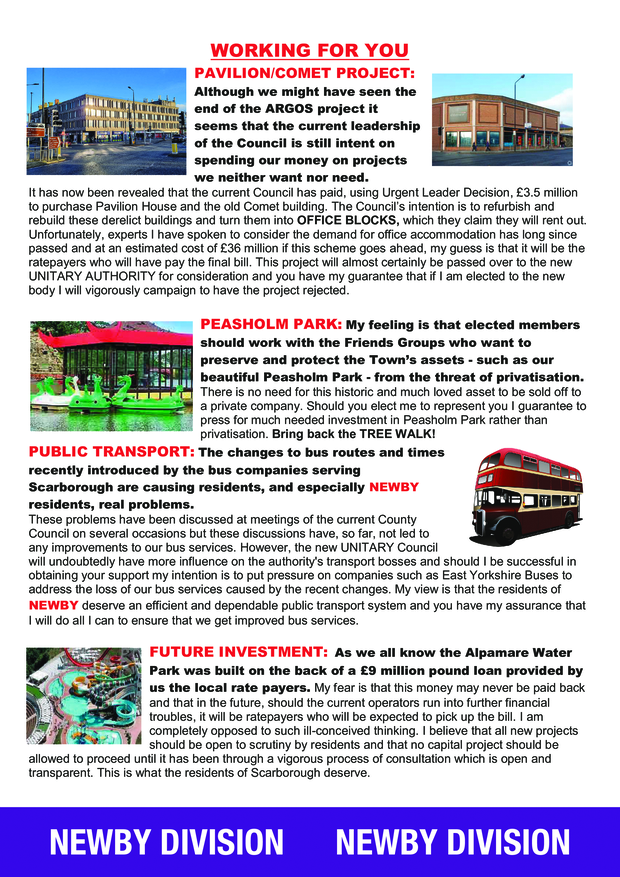 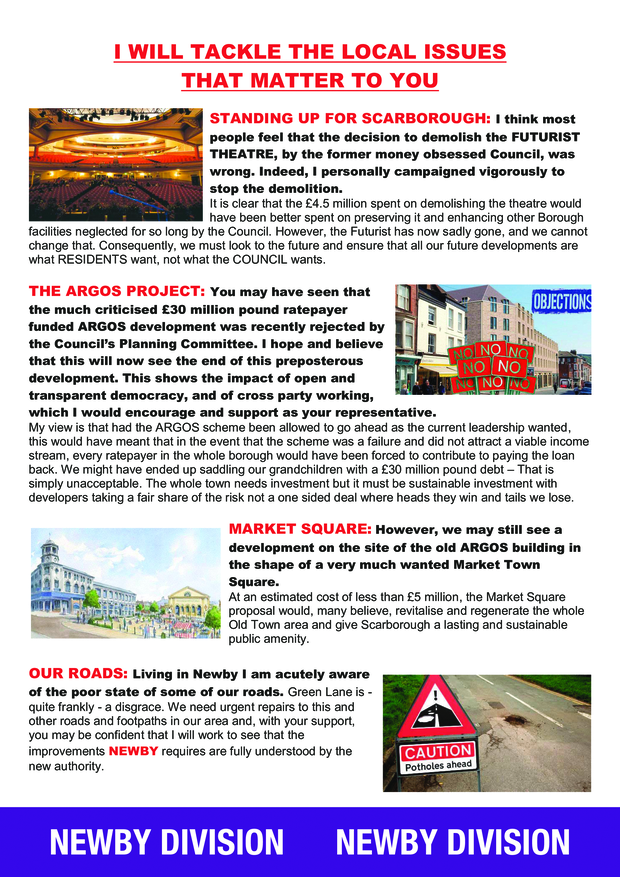