Good day to you.

Were it not for the Council’s policy of intercepting emails to and from Council personnel and members of the public, it would be my pleasure to address you in a more private way.

It must be disconcerting to discover that my many concerns regarding the probity of your Councillors and Officers are now being vindicated in such a public manner. I refer, of course, to recent news articles.

I would like to renew my invitation to you to join me for a coffee and a sticky bun (my treat) so that we can progress matters “unter vier Augen” (as the Germans say).

In the meantime, let us begin by addressing the most recent in a long line of disingenuous statements and actions which, taken together, have plunged Scarborough Borough Council into the depths of disrepute – on your watch.

A local news outlet has reported on statements made by the Leader at Full Council on Monday 24th January 2022. I quote:

Having reason to believe this statement to be untrue, I made arrangements to draw it to the attention of certain interested parties. This appears to have had the desired effect; the same news outlet published a statement from Mr Gordon GIBB (Flamingo Land’s Chief Exec), which it pleases me to reproduce, in its entirety, thus: 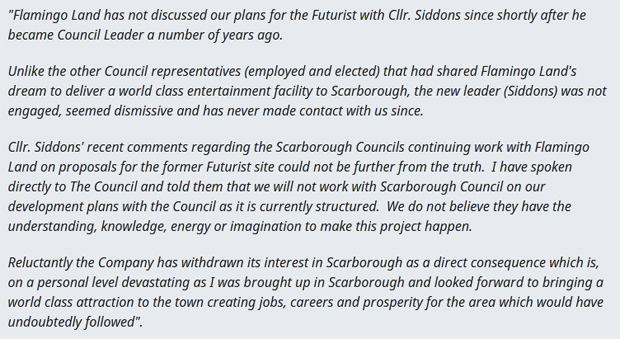 Allow me to focus your attention on two particular sentences:

“Flamingo Land has not discussed our plans with Cllr Siddons since shortly after he became Council Leader a number of years ago“.

“Cllr. Siddons’ recent comments regarding the Scarborough Councils continuing work with Flamingo Land on proposals for the former Futurist site could not be further from the truth.”

I hope we can agree that this is tantamount to calling the Leader a liar. The Facebook user “on the Clapham omnibus” has been using that very word; “liar”.

Yet within the same article, a response from the Leader was in due course published:

It is noteworthy that the Leader has not refuted Mr GIBB’s statement, either in word or in spirit. He has not even addressed it. Qui tacet consentire videtur; “He who is silent is taken to agree”.

The Leader’s statement “we have been in discussions with Flamngo land as our preferred bidder for some time” is not compatible with “Flamingo Land has not discussed our plans with Cllr Siddons since shortly after he became Council Leader a number of years ago“.

Nevertheless, “discussions with Flamingo Land” must surely be a matter of documentary record (if only in the form of an email trail arranging meetings, in person or over Zoom). This may explain why an overwhelming majority of members of the public believe Mr GIBB – why, one might ask, would he publish a press statement in the knowledge that any falsehood might render him liable to a libel action? Conversely, why would the Leader sidestep refuting Mr GIBB’s statement if the documentary material with which to do so was to hand?

Forgive my use of a colloquialism, Mike, but this is pure, unadulterated bullshit. It has long been my view that the man is full of it.

Surely, after the flim-flam has evaporated, the Leader must either file claim against Mr GIBB under the terms s.1 of the Defamation Act 2013 – or resign from the Leadership and the Council forthwith.

There can be no place for liars in public life.

When the extraordinary omission of required information within the Leader’s Urgent Decision of 17th December 2021, dealing with the acquisition of the two properties at 1 St. Helen’s Square, was first drawn to my attention, I was non-plussed:

It seemed to me to be a logical impossibility that the Leader could have omitted either to make Declaration of his personal acquaintance with the vendor of one of the properties (the maisonette), or to have requested and obtained a Special Dispensation to withhold Declaration. Yet that is exactly what the word “None” signifies. He did neither.

It was, at that time, a matter of record that, despite having made the requisite Declaration regarding his personal acquaintance with the vendor of the same property (the maisonette) at a minuted meeting of the Scrutiny Board on 8th July 2020, Councillor Subash SHARMA [Lab.] omitted to re-iterate his Declaration, when acting as Chair, at the Planning & Development Committee meeting of 9th December 2021. How it could be that the Monitoring Officer failed to identify that omission is beyond my power of explanation, given that his earlier Declaration is on the record.

Alas, at the Planning & Development meeting, he did act otherwise. The minutes show that he did not re-iterate his Declaration. The precedent he set, he later disregarded. That seems to me to be an open and shut case. Whether or not the infraction satisfies the requirements of the Localism Act 2011 in respect of designation as a criminal offence is not for me to decide. It does, however, have an impact on the Leader’s conduct.

Returning to the Leader and the absence of an appropriate Declaration/Dispensation, it is clear that the same requirement which moved Councillor SHARMA,  in July 2020 , to provide a Declaration disclosing his personal acquaintance with the vendor – which he did, as the minutes (and video) confirm – now fell upon the Leader when signing-off his Urgent Decision to disburse Council money (i.e. public money) to his close personal acquaintance, the vendor. What was encumbent upon the Chair of Planning was equally encumbent upon the Leader – morally, perhaps more so, for Leadership carries a greater burden of moral rectitude.

Aside from the complete record of minutes and other Council documentation, social media screenshots, title deeds, valuations, messages, emails and video-clips, etc., which ascertain the inalienable facts of the case, consideration must also be given to the wider significance of a Council Leader having apparently wittingly concealed his association with a Labour Group colleague (the vendor) – a ‘Friend’ on social media – within the process of a property purchased at a price advantageous to that vendor. The requirement to provide a Declaration of Interests exists specifically to rule out any appearance of impropriety, however remote. And now we have Mr GIBB publicly stating that the Leader’s words “could not be further from the truth”.

Yet a far-from-remote appearance of impropriety is inherent – indeed, is concretely manifest – in the difference between the price paid by the Council to the vendor for the maisonette (£100,040) and contemporary estimates (£57,000) – a sum significantly down on the price originally paid by the vendor (£80,000).

Reports emanating from the Market Hall on Saturday 18th December 2021, assert that the vendor was cock-a-hoop over the deal, as well he might be.

It is irrelevant to claim – as some of the Leader’s followers have claimed – that the Leader was unaware of the requirement to make a Declaration. His obligation, where his own knowledge may have been insufficient, was to consult the Monitoring Officer. Besides, ignorance of the law is no defence in law.

You are almost certainly unaware of the private email exchanges between members in the light of what I will dub “Flamingo Gate” and “St. Helen’s Gate”. They are incandescent with rage; they feel themsleves at risk of being tarred by the present administration’s brush of sleaze and corruption.

You may (possibly?) be aware that I wrote to the Deputy Monitoring Officer, Ms Carol REHILL, on 12th January 2022 (like a number of elected members, I refuse to engage with the Monitoring Officer, who I regard as inept and dishonest), offering to provide evidence and testimony in these matters. You will find a copy of my email to Ms REHILL at the foot of this page. I have received no acknowledgement – much less, thanks.

I close by directing your attention to the Cc:– recipients of this email. Where it is approriate to copy-in SBC Councillors, I have used their private email addresses via Bcc: to circumvent the Council’s draconian email interception system.

Finally, if you are to staunch the haemorrhage of probity departing your Council – our Council – you must grasp the nettle, Mike. As Chief Executive, it is your duty to take the Leader to one side and explain that the Council, as an institution, is bigger than his inflated ego. He must go. Now.

I call upon you to do just that.

PS: I had intended to make detailed reference to the Independent Persons’ vindication of my critique of Councillor Paul RILEY [Ind.] and his entirely unsatisfactory backhanded apology to Councillor PHILLIPS [Con.] over his disgusting “bed-wetter” remarks in Council, and to Councillor John ATKINSON [C.I.M.] regarding his hypocritcal reproach to second-home owners; these low-order lapses can wait for another day.

I can confirm, having been present at the Planning & Development Committee meeting of 9th December 2021, that no Declarations were made by members of the Labour Group in respect of 1 St Helen’s Square. 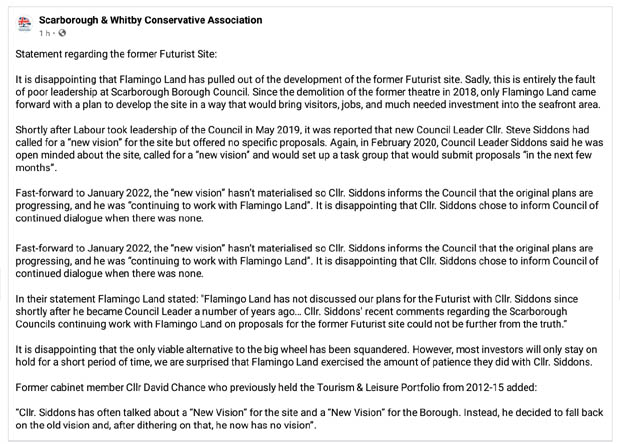