On Tuesday 14th December 2021, readers may recall, the Enquirer published an article of mine entitled “SIDDONS: No Confidence Vote (No. 3)”.

On Wednesday 5th January 2022, the Council’s Group Leaders were casually informed that an Extraordinary Meeting will be held via Zoom on the Council’s YouTube Channel on Monday 17th January at 2:00pm, to consider the following Motion:

On account of the present lack of transparency, inclusivity and respect evinced amongst members, change is urgently needed to restore public faith and confidence, a sound administration and a return to balanced debate. It is our contention that this can only be achieved by a change of leadership. We move that the current leader relieves himself of the leadership.

This report would be incomplete were I to neglect to mention that the Monitoring Officer may have found herself in trouble had she attempted to refuse this Motion, since there exists a legal precedent; an almost indistinguishable form of words was utilised (successfully) to oust an unworthy despot at a Council in the south of England, less than a year ago.

However, despite the disclosure to Group Leaders that the Extraordinary Meeting was now scheduled for Monday 17th January 2022, come the morning of Thursday 6th January 2022, neither the Proposer, the Seconder, nor any of the other three signatories to the Motion had been informed officially of the decision. One can only surmise that Legal & Democratic Services department must have stayed out after midnight and, in consequence, been transformed into a pumpkin.

Consequently, CEO Mike GREENE, having returned from his seasonal vacation, invoked ‘delegated powers’ and made it known to the signatories that either the Extraordinary Meeting would be held ‘virtually’ (i.e. via Zoom), or else it would be deferred until the end of the month (i.e. AFTER the all-important meeting of Full Council at which the present administration’s Budget must be ratified), or later, dependent on the state of the nation in terms of the pandemic. I was under the impression that the legislative authority enacted by the government permitting ‘virtual’ Council meetings had long since expired but if Mike sees fit to play the tail and wag the dog . . .

Understandably, the signatories (the ‘Famous Five’) will not be satisfied with this decision. Town and Parish Councils are taking place ‘physically’ all over the Borough and SBC Councillors are free to meet, eat drink and be merry whenever and wherever they wish. Why not in the Council Chamber?

Well, one difference is that, in a ‘physical meeting’, the Monitoring Officer cannot sit with her index finger poised over a ‘mute button’ with which to censor any remarks from members that do not sit with her agenda – which is, of course, to protect the incumbent administration from lawful challenge. (I will return to this point presently).

Given the form of words of the original Motion (see my earlier article), it surprised me not one bit that the reason for the delay turns out to be that Monitoring Officer, Mrs Lisa DIXON, has been strenuously resising calling the meeting on the following grounds:

“Although the part of the motion relating to openness and transparency would appear to be a valid point for discussion at full Council and we would be able to accept the motion if limited to this point, the link to ongoing safeguarding concerns is problematic.”

“You will appreciate that we are not able to put the Council in a position where it may act unlawfully and we would also not want to expose individual Members to that personal risk. Consequently, we are not able to accept the motion as currently drafted.”

[My emphasis in bold type]

Does this Council have CONFIDENCE in the present Leader to Safeguard members of the Council, Paid Service and the public; and to uphold the Principles upon which he was elected?

On account of the present lack of transparency, inclusivity and respect evinced amongst members, change is urgently needed to restore public faith and confidence, a sound administration and a return to balanced debate. It is our contention that this can only be achieved by a change of leadership. We move that the current leader relieves himself of the leadership.

The ”Safeguarding issues” that the Monitoring Officer has been so determined to avoid are well-known to regular readers of the Enquirer – and even the SN. As has previously been reported, several Councillors and members of the public have been on the receiving end of verbal abuse, threats and even physical acts of violence. In my view, had these incidents been properly investigated and brought before the Council’s Standards Committee (which they never have), Councillor SIDDONS’ Leadership may have come to an end much sooner.

But censuring the guilty parties always risked SIDDONS foregoing the indispensible support of the Independent Group – who may now feel somewhat less inclined to prop him up in the forthcoming Vote of No Confidence, since it is clear that three of them – the three who hold Portfolios in the SIDDONS Cabinet – will be viewed as simply voting to retain their own positions (and concomitant double Allowances).

If SIDDONS falls, remember, so does his Cabinet, and those three Independent Group Members (Councillor Janet JEFFERSON [Group Leader], Councillor Michelle DONOHUE-MONCRIEFF and Councillor Jim GRIEVE) will all find themselves back on Basic Allowances of £4,320.24 per annum, instead of their present Cabinet Member Allowances of £8,640.48 per annum.

So if the three Independent Group Portfolio Holders DO support SIDDONS, they will be remembered as “Major Major Major’s Money-grubbing Mercenaries”.

If they DO NOT support him, they will be £4,320.24 per annum worse off financially, but will present a more principled and honourable appearance to the electorate.

Councillors JEFFERSON and DONOHUE-MONCRIEFF (if not GRIEVE) will surely be mindful that there will be elections to the new North Yorkshire Unitary Authority in May 2022, four short months away. They may even figure out that this is no time to look like money-grubbers.

In any case, it seems obvious to me that the three Independent Group Cabinet Portfolio Holders have a Disclosable Pecuniary Interest (DPI) in the outcome of the Vote of No Confidence – to the tune of £4.32K per annum. No doubt Mrs DIXON will provide ‘special dispensations’, as she has done in the past – based, of course, on the claim to have sought ‘external legal advice’ (last time, this advice turned out to have been obtained through a casual and unrecorded telephone conversation). 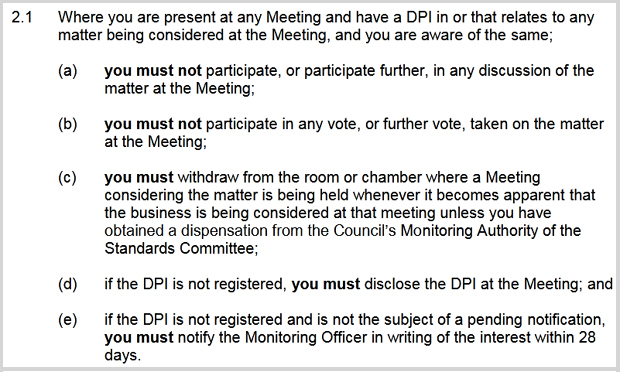 Long-term readers will recall that when Enquirer editor TIM THORNE exposed then-Councillor Tom LAWN’s failure to disclose interests in the Sirius Minerals potash development, Mrs DIXON referred the matter to the North Yorkshire Police and then-Councillor LAWN did the honourable thing – he resigned from the Council.

I wonder whether or not readers are aware that Mrs DIXON’s duties are set out in Article 5.4 A.2 of the Monitoring Officer’s Protocol, which specifies her duty to:

Can you believe that? It is her job to attempt to get wrong-doers off the hook? Who the hell authorised that affront to the fundamental principle of “All equal under the law”? Sadly, it was our elected members.

Most recently, of course, we had the Leader’s Urgent Decision to acquire Pavilion House and Comet Corner for the ‘substantial premium’ price of £3.5 million – with no member involvement. (Group Leaders – but only Group Leaders – were apparently ‘briefed’ on 5th October 2021; no prices were disclosed).

Then there was the acquisition of 1 St. Helen’s Square from a fellow former-Councillor [Lab.] – again with no acquaintance disclosed – and again with no purchase prices disclosed to Councillors or members of the public.

This was even more secretive than the ARGOS deal, for which members saw the documentation for the first time on the Friday evening and were called upon to vote in favour of it on the Monday afternoon – with many never having found time to read the documentation until it appeared on the Enquirer.

But Councillor SIDDONS must have very little confidence in his Leader’s Urgent Decisions – why else would he keep the details out of sight? If he were confident that they were good decisions, surely he would be setting out his stall centre-stage, in the spotlights and with a fanfare befitting the occasion? But that is not his way.

From time to time, documents have been passed to me that shed light on Councillor SIDDONS’ acumen, competence and attitude to transparency. Often, but by no means always, such documents may be verified by reference to other sources.

On 22nd December 2021, I emailed the Leader, asking him to confirm the authenticity of one such document, which I attached for his perusal.

He has neither acknowledged nor responded to my email. Those familiar with the legal tenet “Qui facet cosentir videtur” (“He who is silent is taken to agree”) may assume, as may I, that the Leader has tacitly acknowledged the authenticity of the document but, for whatever reason, does not intend to confirm it publicly. So much for transparency.

At the second Vote of No Confidence in the Leader, just one year ago, Councillor SIDDONS prevailed by 25 to 20. That is tighter than meets the eye. Had just three members voted the other way, the No Confidence Motion would have carried 23 to 22 and SIDDONS would have been clearing his desk. It becomes clear that ‘smuggling’ those three Independent Group Cabinet Portfolio Holders into the meeting via ‘special dispensations’ is crucial to SIDDONS’ cause.

But now that the May 2019 ‘newbie’ Councillors have seen for themselves the disgraceful snow-job over the threats, intimidation and abuse (and the toxic climate that has caused), the failure at Planning of the SIDDONS’ flagship ARGOS and, most recently, the inexcusable secrecy over the purchase price of the various properties, we can only hope that our elected representatives will seize upon this opportunity to ensure that Scarborough Borough Council is led gracefully out to pasture in the hands of a wiser, kindlier and more candid Leader who will have the moral courage to dock ‘the tail that wags the dog’ and put the brakes on this round of rash and irresponsible spending/borrowing.

A line form Stephen SONDHEIM comes to mind: “Send in the Clowns”.

To my mind, a more appropriate instruction would be the exact opposite.