Tim Hicks continues his series of articles investigating Chief Police Officers expenses, which has been very popular with our readers. Tim is a Chartered Accountant with extensive experience in auditing expenses claims.

I have written a series of articles on the results of my analysis of Chief Police Officers expenses. This article concerns NYP’s former Chief Constable Dave Jones and his mysterious taxpayer funded trips to Belfast.

The entry for Chief Constable Jones on the NYP website is as follows:

In my article “The Leeds, Belfast & Harrogate Connections” , I covered the way Jones:

This article is solely concerned with the latest developments concerning the two trips to Belfast.

I was surprised to see the costs of a weekend in Belfast being charged to the North Yorkshire taxpayer in September 2014. A few innocent explanations for this expenditure occurred to me, but were quickly eliminated:

I cannot think of any reason he should go to Belfast for a day. Nor can I understand why he should return via London, not Leeds or Manchester.

I wrote to Chief Constable Winward to ask her for an explanation of this expenditure. I also asked her to contact Chief Constable Jones to ask him what the journey was for.

She responded promptly and courteously declining to comment. She did however confirm that my request had been treated as a Freedom Of Information request and forwarded to the Civil Disclosure Team. Inevitably, the FOI request came back from Ms Liz Fryar, who is a Legal Officer who deals with Civil Disclosure: “I am not obliged to provide you with a response to your request”.

This caused me some concern for three reasons:

So I wrote to the Police, Fire & Crime Commissioner at the time, Philip Allott, who was responsible for holding the Police to account. I asked him to confirm what the expenditure was for. He did not respond.

Following the departure of Commissioner Allott, I wrote to the new Police, Fire & Crime Commissioner Ms Zoe Metcalfe, asking her to confirm what the expenditure was for. She did not respond either.

So it appears all of the people paid to hold the Police to account and respond to my enquiry had closed ranks behind Chief Constable Jones, to withold information that the public are entitled to know. This is known as stonewalling. 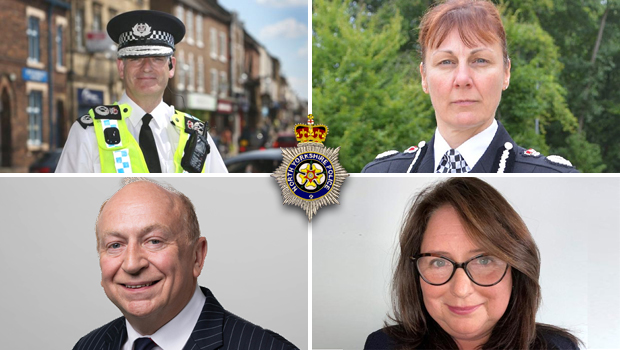 He is being loyally backed up by:

Why can’t the people of North Yorkshire have information on how their money has been spent?

If there is a rational explanation, why will NYP not state what it is?

Most concerning of all is that both Police, Fire & Crime Commissioners and the Civil Disclosure Unit are supposed to release information to the public, but in fact are witholding information for no reason.

The NYE’s quest for the truth continues

Being determined to get to the truth, I wrote to the Police Service of Northern Ireland (PSNI), asking it to confirm what police duty Chief Constable Jones was on in Northern Ireland and it eventually came back confirming that it didn’t know either. 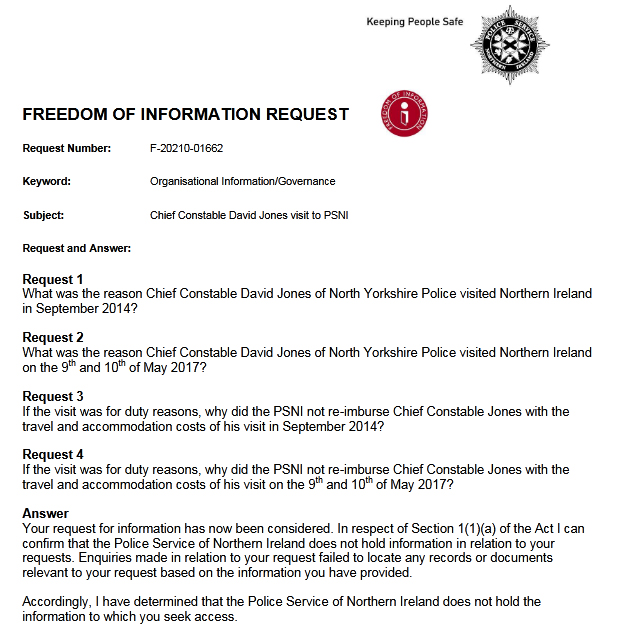 It therefore appears on the face of it that Chief Constable Jones’s visits to Northern Ireland were not for duty reasons.

It should be emphasised that there could be an innocent explanation for this expenditure.

The important thing now is to find out what the expenditure was for. So I will be writing to the North Yorkshire Police, Fire & Crime Panel (the body responsible for supervising Commissioner Metcalfe) asking it to confirm this.

I will of course let the NYE’s readership know what response I get from the panel in due course.

The series of articles run by the NYE on Chief Officer’s expenses are about upholding the principles of openness, financial control, transparency and accountability over taxpayers funds.

NYP has always been given the opportunity to clarify what it is for, but has never responded openly with an explanation. Instead it has stonewalled at all levels to withold information.

This is why it is so important that when faced with a deliberate policy by both the Chief Constable and the Police, Fire & Crime Commissioner of witholding information the public is entitled to have. That the police are held to account by a free press.

The NYE will therefore continue to relentlessly pursue the truth – whatever it is and wherever it takes us.

I will report back when I have a response from the Police, Fire & Crime Panel in due course.

Coming next in the series