As predicted, not all 22 of the Scarborough Borough Councillors who voted in favour of the demolition of the Futurist Theatre are standing for re-election on 2nd May 2019. To put that another way, two have deprived electors of an opportunity to manifest their displeasure – namely, outgoing Mayor Councillor Joe PLANT [Con.] and former Cabinet Portfolio Holder, and Labour renegade Councillor Vanda INMAN [Ind.Ind.]. Others have migrated to safer Conservative wards. Those who have braved the ballot box have this much in common: they may run – but they can no longer hide.

Prominent Tory Councillors absent from the list are former Leader and Mayor, Councillor Tom FOX [Con.] (who, prudently, was absent on the day of the vote) and Councillor Andy BACKHOUSE [Con.] (who voted against demolition). No doubt, both had their reasons. Both have been touted as zealous pretenders to Councillor BASTIMAN’s rickety ‘throne’. 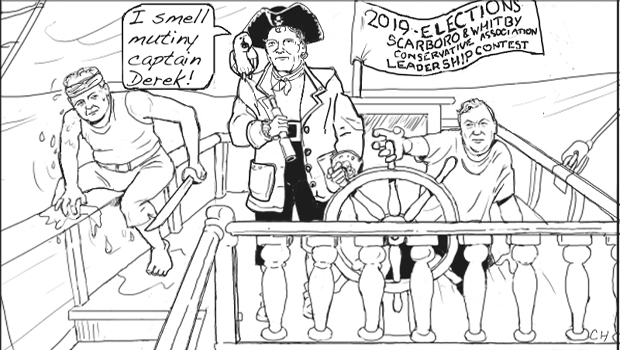 It would be unfair to be too hard on some of the culprits. There is no prospect of advancement beyond Basic Allowances without dancing to the Leader’s tune. Councillors who hope to achieve anything – either for their electors or for themselves – can climb the ladder only by supporting the Leader’s masterplan – whether it makes any sense or not. That is the price of party membership.

We may never know whether the decision to demolish the Futurist Theatre will serve Scarborough ell. What we do know is that the process and methodology by which it was achieved, as Councillors Norman MURPHY [Ind.] and Janet JEFFERSON [Ind.] have asserted, has been dishonest from start to finish. I cannot vote for dishonest.

Here, for voters’ ease of identification, are the names, parties and present wards of those Councillors (pictured above) who betrayed the will of the people and voted for the demolition of the Futurist Theatre.

1) Derek BASTIMAN [Con.] (Scalby) – Present Leader of the Council and very much a prime mover in the long-predetermined demise of the theatre. No-one to whom I have spoken can remember a more unpopular Leader.

2) Lynn BASTIMAN [Con.] (Stepney) – The Leader’s spouse and formerly a Councillor in Stepney ward, but obviously running scared and this time is standing in Newby ward. My only recollection of her making any contribution to Council proceedings – other than her contribution to demolishing the Futurist – was to claim a Special Dispensation to vote against the Motion of No Confidence in her husband and his Cabinet. How sweet.

3) Godfrey ALLANSON [Con.] (Hertford) – Long-serving Tory backbencher and all round yes-man (or, as some would have it, puppet), ALLANSON lives in the village of Muston which forms a small part of the new Hunmanby ward. Best-remembered for having run the now-defunct Muston Scarecrow Festival – into the ground. Noted, too, for having turned a blind eye, a deaf ear and a vacant expression when his ward colleague (then, a fellow Conservative Councillor) was summarily dismissed from the Cabinet over a disability issue and subsequently illegally prohibited from attending meetings and interacting with Officers by outgoing (one can imagine why) CEO, Jim DILLON.

4) David CHANCE [Con.] (Whitby – Mayfield) – CHANCE has been insisting that he would not be standing this time around but looks to have had his arm twisted on account of the Tories’ uphill struggle to attract new candidates. Or indeed old candidates. As an Executive North Yorkshire County Councillor, his interests now lie in Northallerton, where the Allowances are far more generous and the prestige so much greater.

6) Simon GREEN [Con.] (Cayton) – Was Mayor (arguably the worst ever – and that is some achievement!) at the time of the demolition vote and, as such, held the casting vote should it have been needed. Had Councillor INMAN abstained, rather than defying her party policy, the Mayor’s casting vote would anyway have carried the demolition Motion. His performance was unforgettable – like something out of a Python sketch.

7) David JEFFELS [Con.] (East/West Ayton) – Another yes-man who has seen it all, done it all and worn the lettering clean off the T-shirt. JEFFELS is a personable enough elderly gentleman who has always been happy to play follow-my-leader. In short, just what Ayton wants.

8) Andrew JENKINSON [Con.] (Newby) – At the time, a Portfolio Holder, so very much one of the knowingly guilty, JENKINSON is also the Councillor who described the electorate as “thick”. Remember, folks – you get what you vote for. If you are thick enough to want “thick” . . .

9) Helen MALLORY [Con.] (Seamer) – Helen MALLORY is the Portfolio Holder who would have us believe that the £9M unsecured loan to BBL is safe because the Council owns the freehold of the land , never mind about Lloyds TSB and Abbey Commercial Investments Ltd holding charges on the built-asset.

10) Jane MORTIMER [Con.] (Whitby – Robin Hood’s Bay/Fylingdales) – So far out of touch that she probably thought that she could vote for the demolition without any backlash at the ballot box. Anything is possible.

13) Heather PHILLIPS [Con.] (East/West Ayton) – PHILLIPS is another yes-person. In fact, a well-rewarded yes-yes-yes-person – which is how it works in the Tory hierarchy.

14) Martin SMITH [Con.] (North Bay) – Having been obliged to change ward (the North Bay Ward has been abolished), SMITHY is now trying his luck in Northstead ward. He is one of those particularly disingenuous Councillors who indicated his intention to vote against demolition and was only dragged back into line by DB’s application of the stick and the carrot. Another mediocre ex-Mayor.

17) Sandra TURNER [Con.] (Whitby – Streonshalh) – Portfolio Holder focussed on her own ward but ever a team player.

19) Bill CHATT [Ind.Ind.] (Woodlands) – Bill CHATT is an ‘independent’ Independent (i.e. not a member of the Independent Group) but is widely considered to be a Conservative in all but name. Critics maintain that he only stands as an Independent because a Conservative has more chance of being molested than elected in Woodlands. He is another Portfolio Holder who is focussed on his own ward – but almost invariably holds the Tory line.

20) Mike COCKERILL [Ind.Ind.] (Filey) – Another ‘independent’ Independent, COCKERILL has been vigorously supported and defended by the Leader in the face of sustained criticism and adverse reports in the national press, even though he is nominally an Independent – a thick Tory in the thinnest possible disguise. He is another Portfolio Holder and, like Bill CHATT, would struggle to achieve election on a Conservative ticket.