Hard on the heels of the resignation of Chief Whip Andrew MITCHELL MP (Con), the ‘plebs’ amongst us (amongst whom I number myself) will no doubt be unsurprised to learn of similarly unacceptable behaviour on the part of Scarborough & Whitby’s Robert GOODWILL MP, renowned for his rash statements and distant manner.

But unlike the one-off ‘red mist’ outburst of the Chief Whip, the Assistant Whip Robert GOODWILL MP (Con. – Scarborough & Whitby) has made a habit of name-calling with (dis)respect to myself and other campaigners, referring to me as “crazy”, “barmy”, “bonkers”, and so on. Rational debate has never been his forte, but hopefully the Andrew MITCHELL episode will have convinced our MP that his abusive remarks are now completely unacceptable.

Another (far bigger) story has been hogging the headlines recently – seemingly with no end in sight. I refer, of course, to the extraordinary revelations comprising the Jimmy Savile scandal. As each day rolls by, we hear more and more bizarre allegations about Scarborough’s (until recently) favourite ‘adopted son’ – a Freeman of the Borough of Scarborough – only a matter of days before the Council was due to unveil a statue of him.

In the light of the apparently total ‘cover-up’ by the BBC and other formerly respected institutions (including the Police, the Prison Service and the press), one wonders who, within local corridors of power, adopted the same ‘hear all, see all, say nowt’ philosophy for which – it has to be said – Yorkshire is famous.

Ahead of publication of this present article, I wrote to Robert GOODWILL MP, asking him (for the sixth time) for details of the process through which I could pursue a complaint against him in regard to his name-calling and abusive remarks.

For the sixth time, he declined to tell me.

I asked him to comment on how it could be that the long-serving Councillor Tom FOX (SBC Leader and formerly a ranking Police Officer in Scarborough) could conceivably have been unaware of the many allegations against Sir Jimmy Savile.

I also asked him to explain an email sent by his wife to one of his Whitby constituents, in which she accused that constituent of being “so perverted” as to have somehow been responsible for providing Robert GOODWILL with the “utterly disgusting” pornographic images that she claims to have found, in the presence of her children, on the MP’s personal computer.

All he had to say was:

It may therefore come as a surprise to read that when one of Mr GOODWILL’s constituents emailed him (at his personal and Parliamentary email addresses), over a bona fide constituency matter, attaching some entirely innocent photographs to illustrate his concerns, he received an astonishing rejoinder from Robert GOODWILL’s wife Maureen, accusing him of being ‘so perverted’ as to have exposed her children to pornographic images.

(The full email exchange is reproduced at the foot of this article).

It gives every appearance that, while innocently perusing photograph’s on her husband’s computer, Mrs GOODWILL and her children came across pornography so offensive as to prompt her to describe it as ‘utterly disgusting’.

Mrs GOODWILL appears to have leapt to the conclusion that the said constituent (whom she had previously met and was well aware that he often sent Mr GOODWILL images illustrative of Whitby issues) had somehow insinuated this vile material into her home. She promptly fired off an extremely rash email to that innocent and unsuspecting member of the public, wrongfully accusing him of exposing her and her children to ‘utterly disgusting’ images.

Under normal circumstances it would, of course, be rather poor form to comment on goings-on within the GOODWILL household. However, Robert GOODWILL is a public servant, elected on a Conservative platform of opposition to children being exposed to computer-based pornographic images, and one of his constituents was falsely accused of a criminal offence and of being a pervert – clearly a most distressing email for any man to receive; the more so in response to a well-intentioned attempt to keep the MP abreast of constituency problems.

Quite apart from the fact that Robert GOODWILL – a Conservative MP and Assistant Whip with responsibility for Treasury and DEFRA Business – has been publicly accused of serial misuse of Parliamentary Expenses, breach of the public trust, hypocrisy, and exposure of children to pornography in the home, one of his constituents has been threatened with Police action without even the slightest justification! (That, remember, is a criminal offence under the Protection from Harassment Act 1997).

All of this puts the matter firmly in the public domain, as a legitimate subject for publication on Real Whitby, in the public interest.

I offered Robert GOODWILL MP a second opportunity to respond or comment on my concerns and his response stated that;

But he did not deny the allegation.

The evidence substantiating it is published below.

He also declined to offer any apology or expression of regret over the deeply offensive and abusive remarks he has previously made to and about me (and others), whilst acting in his capacity as my MP.

I leave his constituents to ponder the question of how he can continue as a Conservative MP and Parliamentary Assistant Whip under these circumstances. Not only does Robert GOODWILL MP make abusive remarks to his constituents, abuse his expenses, breach Conservative Party Policy directives (which uphold family values and strenuously oppose computer pornography in the home) – and attract adverse national publicity when doing so – but one of his constituents has been falsely accused of being a criminal and a pervert, even though the man had no part whatsoever in placing the pornography on Robert GOODWILL’s computer.

And we are left to wonder why Robert GOODWILL MP concluded his email to me with the words:

So there it is. No apology. No denial that there were pornographic images on his computer – or provision of any innocent explanation. No condemnation of the Savile affair – or its cover-up. Once again, we encounter an appeal to the ‘right to silence’.

Let us not forget that silence tells its own story. Here is the proof of that story.

To: ‘A member of the public’

I have just finished reading your e-mail and was looking at the photographs of which I always find interesting, however I was utterly disgusted to see the rude photos you also sent with them. If this was meant to shock me, it really did, and I was upset as my children were present. I will discuss this with Robert in the morning, but in the mean time I intend to let the police know and see what action I should take. This is really a pathetic way of behaving, and I cannot believe you can be so perverted as to send this sort of photo to my home. When I met you in [location redacted]I thought you were a decent person, how wrong I was.

The following morning, that member of the public opened Mrs Maureen Goodwill’s email, and found himself deeply affronted by the defamatory and unsubstantiated accusations levelled against him. He immediately emailed Robert GOODWILL MP, copying in the Whitby Gazette and various other recipients. That email has since been so widely circulated as to be securely in the public domain:

From: ‘A member of the public’

I have received an email from your email address rgoodwill@btconnect.com proclaiming to be from a Mrs Goodwill with regards to a “rude photo”. (see below)

The photos attached (see attached) were of the salt pollution at the rear of Pemberton House and Jefferson House as can quite clearly be seen. The only email addresses I have been given by you are:

both of which you regularly use when you send emails to my email account. I do not have any other email address for the surname ‘Goodwill’.

It would be impossible for any rude photo to be sent from my computer or any other means as I do not posses such photos. I note Mr Goodwill you returned an email at 5:45 in reply to the exact same email that ‘Mrs Goodwill’ is referring and is the only email that was sent to rgoodwill@btconnect.com and GOODWILLR@parliament.uk, your reply said “Thanks [redacted] I always enjoy getting your mail”.

It will be very easy to see exactly where the photo came from and my advice is that should your computer contain rude photos then my advice MP Mr Goodwill is that your wife must immediately go to the police and find the source of such material and immediately prevent the computer from being used by others.

Should you require any assistance from me I can be contacted on [mobile number redacted].

Please do let us all know when you get to the bottom of such material on your computer.

PS – MP Mr Goodwill the following people (see below [names redacted]) were included into ‘Mrs Goodwills’ reply mail from your mail box, each of the addresses below [names redacted] were in receipt of the said email, I have cross checked with them and they also received four photos of salt pollution just like yourself. (The same photos that are attached).

Please keep in touch and lets help you get to the bottom of these photos that have alarmed Mrs Goodwill. 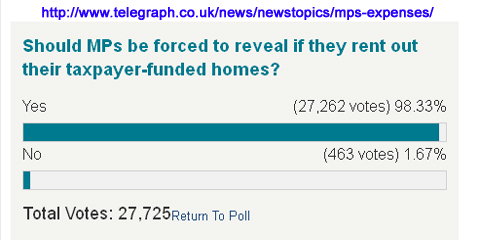