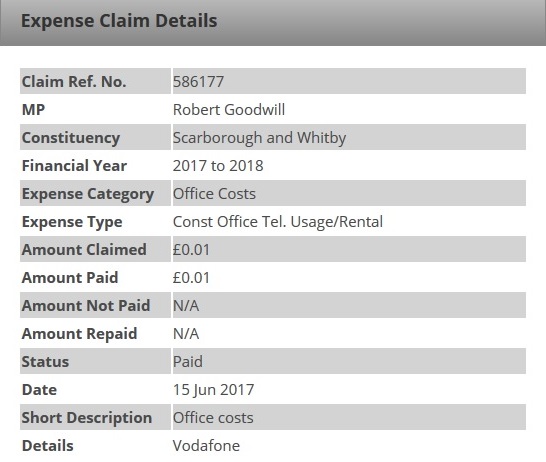 Goodwill’s lust for getting his grubby paws on taxpayer’s money was exposed during the EU Referendum in 2016 when he sacrificed his strongly-held views for a few quid. The cheapskate MPs website states:

Goodwill did an astonishing U-Turn on Yorkshire Coast Radio to cling onto his salary at the Home Office with ministerial responsibility for ignoring Mass Uncontrolled Immigration.

Goodwill’s love of the EU and especially the MEP expense system is well known:

I fly from Leeds/Bradford to Brussels and we get a set fee of around £500, but if I buy a cheaper ticket, economy class for about £160 and £250, I can pocket the difference.

And, as a capitalist, also as a British Conservative, I see it as a challenge to buy cheap tickets and make some profit on the system because that is the system.

The party does not endorse the fiddling of expenses or the impression given that the system should be made available for personal profit.

If you’re planning a new business venture and need a prominent person to open your premises, tightfisted Goodwill would likely show up for a Pint and a bag of Pork Scratchings.