I was astonished to learn, for example, that the inaugural meeting of the Filey, Hunmanby & District Branch took place as recently as Monday 11th March 2019 – in an atmosphere of some confusion.

Councillor COCKERILL is a lifelong Filey resident, a long-serving Councillor well-known in his Filey ward. In recent years, his popularity has been sullied by some embarrassments – not least his infamous use of the “N-word” in a Filey Town Council meeting – very poor form from a former Town Mayor (twice). And harbour-users in both Scarborough and Whitby have been alienated by his frequent resort to the response “This correspondence is concluded” when questions prove difficult to answer. He is arguably SBC’s most unpopular Cabinet Portfolio Holder (with the possible exceptions of Leader Councillor Derek BASTIMAN [Con.] and paedo-apologist Councillor John “I’ll have you know I am a Wordsmith” NOCK [Con.]).

It is inconceivable that the Tories will not be fielding a candidate in Filey ward or Hertford ward (Hunmanby).

So why, I wonder, is Thirsk & Malton MP Kevin HOLLINRAKE going out of his way to “big up” Councillor Mike COCKERILL [Ind.Ind.]?

Surely, Mr HOLLINRAKE continually promoting “independent Independent” Councillor Mike COCKERILL could only result in him wooing electors away from his own party’s candidates? I say, chaps! That’s not cricket! It is to be anticipated that FTC Councillor Christine RODERICK [Enquirers passim], for one, will be less than amused.

There is, of course, a very plausible conjecture – that Councillor COCKERILL, fearing (as many other Councillors fear) that a Conservative return to power after the local elections on 2nd May 2019 is no foregone conclusion, and that in any future non-Tory Council he would be unlikely to retain his Portfolio, may have hedged his bets by joining the Tories, thereby benefitting from the formidable Tory election machine and simultaneously assuring the Tories of one more experienced member should the numbers prove tight.

As stated, this is mere conjecture. But I have long referred to Councillor COCKERILL as a “closet Tory”, so a “coming out” would have been no surprise to me. As a very wise Monitoring Officer once told me, “Nobody changes sides for an entirely honourable reason”.

However, it would seem that Councillor COCKERILL has NOT joined the Tories – at least according to his election leaflet, which makes much of his ‘independence’: 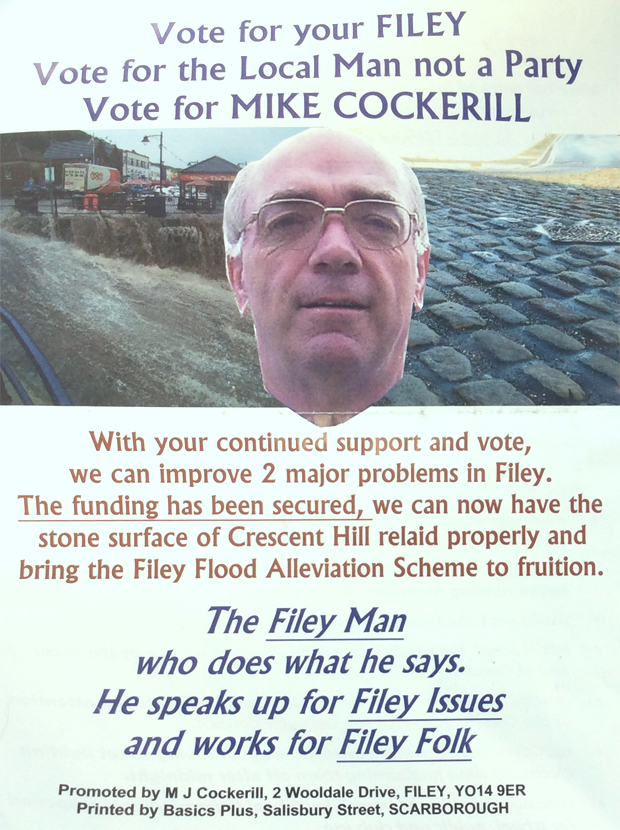 But this begs two questions:

1). If COCKERILL really does abhor party politics, why has he been propping up BASTIMAN’s lame-duck Cabinet all these years? Can it be that he is in it only for the money?

2). Why is Kevin HOLLINRAKE MP “bigging up” the less-than-popular COCKERILL – at the expense of his own party’s candidate? Can it be that he considers the official Conservative candidate(s) to be unsuitable for office?

I am just asking. Perhaps Filey and Hertford electors should be doing the same . . . 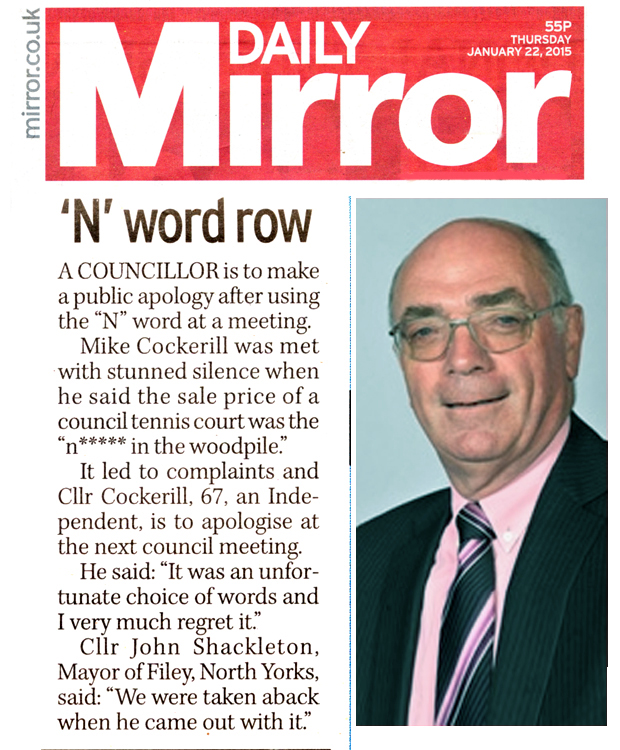 Meanwhile, Councillor COCKERILL is out electioneering with the best of them – never mind the failures, we’re all heroes now.