An OPEN LETTER to the Chair of Yorkshire Coast BID Ltd. (also for the attention of the remaining Directors and the CEO) by NIGEL WARD.

I have been called upon to exercise such powers of persuasion as I find at my disposal to appeal to you and your colleagues to consider your respective positions.

The fact that the membership of two Councils (barring absentees) has expressed the gravest misgivings about your company’s affairs appears to have eluded you.

The remarks attributed to you in the Scarborough News coverage of the Scarborough Borough Council Extraordinary Meeting held on Thursday 28th July 2022 seem to me to confirm, beyond doubt, that you have failed to grasp the full measure of elected members’ condemnation of the manifest failure of your company’s attempts to engage with Levy-payers to deliver enhanced turnover within the tourism and retail sectors.

To suggest, as you do, that the Motion of No Confidence has “been largely strong-armed by a select number of businesses in the area” (without identifying those you accuse) – and that some of the “evidence presented in the lead up to the decision has not been accurate and reflective of the work that has been delivered” (without identifying either the names of the presenters or the alleged inaccuracies of their evidence) – is, in my view, disingenuous, pusillanimous and inflammatory. Some of those “select businesses” were former Directors of YCBID – ‘insiders’ who, being privy to matters determinedly concealed from Levy-payers, know all too well whereof they speak.

Your imprudent remarks have surely inflicted further damage on your cause. You have poured petrol on an already raging fire.

The irony in your allegation – that sustained opposition to your purportedly business-led company has been led by businesses – has apparently escaped you. Such is the measure of your estrangement from the simple realities of the present situation.

Hitherto, YCBID has enjoyed the indulgence of benign and compliant local authorities. Very shortly, you will see that compliance withdrawn. Permissions will be rescinded; dispensations annulled. The only co-operation you can rely upon ‘going forward’ is enthusiastic assistance in setting your company’s affairs in order in such a way as to minimise any further waste of Levy-payers’ money.

You elected – foolishly, if I may say – to ignore my offer of assistance in my email of 23rd March 2020 when opposition to your scheme began to bite. You may have forgotten that I offered “to apply such influence as I may command to encourage qualifying businesses – and my by-no-means inconsiderable readership – to welcome your acknowledgement that now is the time for you to write to Scarborough Borough Council requesting that the Electoral Services Team prepare a fresh ballot untainted by the shortcomings outline by Mr Peter STANYON in his investigation Report.”

Perhaps you imagined that I have no influence.

You neither acknowledged nor responded to my email (I hold proof of delivery); thus, you declined the opportunity to secure a wholesome mandate, untainted by the Councils’ patent conflict of interests in participating in the original ballot. This was foolish.

In the two-and-a-half years since I communicated my offer to you, the situation has deteriorated beyond all imaginable measure. Standing against the 10 remaining active Directors listed above, I note 10 resigned Directors, some of whom have made public their reasons for distancing themselves from your company. You will have reviewed their comments, I am quite sure, here on the North Yorks Enquirer:

Thus, you have lost the support of 50% of your own cherry-picked and Council-delegated cohorts.

You may recall that, on 8th November 2019, I emailed you giving notice of my intention to submit for publication information which, if unrefuted, I anticipated might be embarrassing to you and, by extension, embarrassing to YCBID – I offered you your ‘Right of Reply’. You ignored my email (though, again, I hold proof of receipt). This, too, was foolish.

You may also recall that, on 13th November 2019, having received neither acknowledgemnt nor response from you, I publicly challenged your professional and academic credentials in my column in the North Yorks Enquirer, citing then-current information from Companies House (including a decade of trading losses) and your own LinkedIn profile, as of 12th November 2019.

You have never refuted the information I cited and I note that your LinkedIn profile stands uncorrected, as of today’s date. To my mind, this confirms your desire to perpetuate an enhanced or exaggerated portrayal of your merit. This may explain why you have been described as ‘another Gary VERITY’.

Local media outlet This Is The Coast quoted you, in a report dated Wednesday 27th July 2022, as stating:

“We were the only BID in the UK to have granted a 12-month extension to outstanding payments as we sympathised with those businesses that had experienced struggles during the pandemic.”

Your assertion is rendered questionable by the following quote from a ‘spokesman’ for Neath Inspired Ltd (Neath BID), published in WalesOnline on 10th October 2020:

“This year Neath Inspired has supported businesses by deciding not to collect the BID levy from businesses.”

Certainly, there are grounds enough, I believe, to consider you personally and professionally discredited.

Returning to the present, it should be abundantly clear to you (and, one would hope, to your fellow Directors) that further, deeper scrutiny into the incorporation of YCBID, its performance and modus operandi, is likely to result in a general disrepute which will attach itself both to you personally and, by extension, to your fellow Directors. It has been said, by wiser heads than mine, that no-one faces a hostile Queen’s Counsel over the rim of a witness stand and steps down ‘unbloodied’. You will not be thanked, I may reasonably surmise, for propelling your fellow Directors in that direction, come 3rd November 2022.

It is clear to me that YCBID is, and has been, a failed enterprise. Abysmally so. The projects are widely viewed as unimaginative, weak and, in some cases, counter-productive. Puppets, puffins, bus rides and the re-naming of existing road networks have brought no quantifiable positive impact to footfall or ‘spend’. Your company has achieved little – other than to set the business community at odds with the Councils.

I urge you now to evince a little respect for those businesses from who your company has sought to extricate over £5+ million in exchange for follies, frivolities and granfalloons. The Councils have not been “strong-armed”; they have vented their collective displeasure, dissatisfaction and, latterly, contempt for YCBID. Their elected representatives have satisfied themselves as to the authenticity of the Levy-payers’ claims.

I call upon you and your fellow Directors to salvage a modicum of dignity by embracing the popular verdict handed down by both Councils and that highest of all authorities – the Court of Public Opinion.

I urge you to convene an Extraordinary Meeting of the Board of Directors to consider the most expedient means by which you can accomplish what Scarborough Borough Councillor John NOCK [Con.] has proposed with the full support of the Council – the “swift closure” of Yorkshire Coast BID Ltd.

Do the right thing, Clive. Trust me; you would be foolish to contemplate proceeding otherwise.

Should you wish to discuss with me the finer points of your present predicament, please join me in Whitby for a coffee and a sticky bun – my treat. 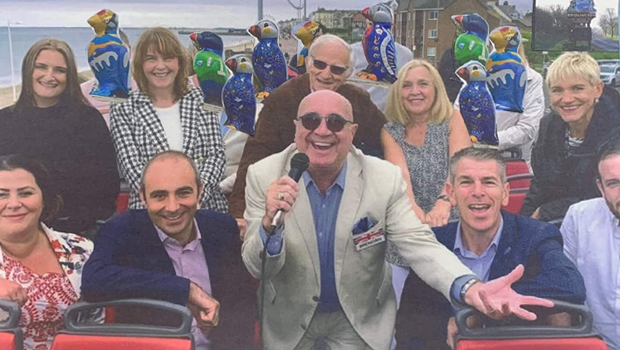