Some of the more ostrich-like elected members of Scarborough Borough Council (SBC) and East Riding of Yorkshire Council (ERYC) will no doubt read Hero SUMNER’s email (below) to the three MPs relevant to the BID area (all Conservatives) with considerable circumspection.

Incapable of imagining that such serious allegations could be publicly circulated without being true, they must nevertheless now confront the facts, seek out the evidence and, as individual Councillors – never mind stepping back and relying on others to take a lead (leadership is not apparent at SBC) – begin to take some responsibility themselves for the present mess, trace it to its roots, and hold their Officers to account.

As Conservatives, the three MPs have no political imperative to sweep the follies and oversights of SBC’s Labour administration under the proverbial. Quite the reverse. But more importantly, where there is even a ghost of a breath of a hint of a murmur of malpractice, they must now be mindful of the fact that they are on the record as being “in knowledge”. That is tantamount to a variant of the Schrödinger’s Cat scenario – but from the cat’s perspective: they do not know when the box will spring open and they better look alive when it does!

Thank you for your reply to concerns that have been raised over the last (almost 4 years) by the businesses who are threatened with possible imprisonment for failing to subscribe to a private, limited company whose governance and administration has received a vote of No Confidence from 46 elected members…

The more recent vote is  from Scarborough Council. East Riding, you may recall, raised a similar motion earlier this summer…?
I have been privileged to receive absolute proof that SBC have (through officer’s recommendations) allowed the  Yorkshire Coast DBID’s poor governance to slip through the net.
At best, it can be proven that the whole outfit (YCBID) has been forced to thrive via officer’s recommendations…. at worst, it appears that the ‘lead authority’ who held the ballot (SBC) have not only been instrumental in misleading the public but have failed to inform East Riding Council of the possible outcomes of the maladministration of the VAT situation.
I have to ask this question… if a single member of your electorate were to be facing a potential VAT ‘mishandling’ (shrouded by silence)… would you deem it acceptable and shrug it off by saying ‘legislation doesn’t allow us to stop this..’?
We are in receipt of absolute proof that the ballot that was held to force this through was ‘rigged’ although deemed ‘legal’.  We are in receipt of absolute proof that both councils (and the Yorkshire Coast BID company) have ‘misinformed’ the public with regards to VAT repayments.
The Yorkshire Coast BID company vows, via their PR company, to carry on regardless and now turns their attention to ‘preserving’ the coastline. A coastline, which I hope as MPs you’re already aware sports the finest blue flag beaches, many of which are already cleansed and monitored by willing and able volunteers and associated interest groups.
Incidentally, you might be interested to know that the giant puppet, funded by local levy paying businesses to the tune of £220,000 is scheduled to appear in Crawley soon. Presumably to increase footfall. In Crawley.
Please inform businesses and residents (your electorate) up and down this coastline as to whether or not you are prepared to back them against enforced threats of imprisonment by a private limited company.
Or will you roll over and allow this lack of democracy win?
Hero Sumner

The MPs may also wish to consider the paradox concerning how and why the BID was permitted to come into existence in the first place. There is something more than a little peculiar about the fact that it was ‘Deputy’ Leader Councillor Liz COLLING [Lab.Co-Op.] who authorised the signing off of the SBC/YCBID Operating Agreement – despite, by the way, reading Finance Director NIck EDWARDS’ Report, with its oblique blame-shifting to Legal Director Lisa DIXON, setting on record the fact that the Operating Agreement had, not once but twice (the second time hastily), been approved by Legal Services (meaning Mrs DIXON): 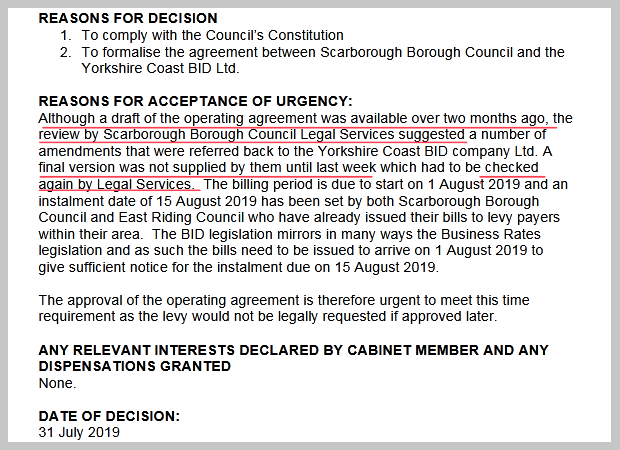 A rush job, or what? Nevertheless, Councillor COLLING must have read Mr EDWARDS’ Report without being sufficiently sensitive to those ‘flashing light’ passages, under-lined in red.
Having spent much of my life in the recording industry, I know from long experience that contracts bounce back and forth through many evolutionss before finally receiving the signatures of the contracted parties. Not this one. Fools rush in . . .

It would be instructive to learn more about the “draft” version of the Operating Agreement. I therefore lodged an FOIA request with SBC, via WhatDoTheyKnow.com, as follows: The following extract from the Minutes of the YCBID Board Meeting of 7th March 2019 (the full document is available here – and well worth a read) shows that, according to Mr Mo ASWAT (architect of the BID), entering into an Operating Agreement is not even a legal requirement – which suggests to me that Councillor COLLING, on the recommendation of Finance Director Nick EDWARDS and Legal Director Mrs Lisa DIXON, committed the Council inextricably (according to Mrs DIXON) – where no commitment was ever necessary! Bravo!

This further extract from the same Minutes gives a telling insight into YCBID’s CEO Kerry CARRUTHERS’ attitude to openess and transparency:

I have always maintained that ‘openness and transparency’ is the first principle to fall by the wayside when skulduggery is afoot.
But the full spectrum of the Councillor COLLING paradox emerges when we consider her comments to the Scarborough News, signalling a 180° U-turn less than a year later: By then, as we see, the penny had finally dropped!

So now I grasp the full significance of the recent Enquirer Photoon. Surely this must be a reference to the ‘catch’ in the second (and final) version of the Operating Agreement – which Mrs DIXON had so little time to check? Certainly, the specialist VAT advice obtained by Mr James CORRIGAN from (inter alia) YCBID’s own accountant demonstrates that there must have been either a fundamental oversight or a fatal misconception at SBC over the requirements of the second Operating Agreement. The wonder is that the same oversight or misconception has also taken place at ERYC, where Mr Mathew BUCKLEY appears to have made the same mistakes. Alas, Mr BUCKLEY retired on 5th August 2022, suitably rewarded for his service. I suspect he was horrified by the damning references to a VAT catastophe exposed by ERYC Councillor Andy WALKER [Y.P.] in his address Seconding the BID Motion at ERYC on 7th July 2022.
The explicit nature of Hero SUMNER’s assertions leaves little more to the imagination:

“…at worst, it appears that the ‘lead authority’ who held the ballot (SBC) have not only been instrumental in misleading the public but have failed to inform East Riding Council of the possible outcomes of the maladministration of the VAT situation.”

“We are in receipt of absolute proof that both councils (and the Yorkshire Coast BID company) have ‘misinformed’ the public with regards to VAT repayments.”

I do not know which evidence Hero SUMNER holds that I do not – nor which evidence I hold that Hero SUMNER does not. But I do know that the evidence I do hold spells d-e-e-p doo-doos.
Readers who might benefit from a concise overview of the YCBID saga could do worse than peruse David BEHRENS superb article in the Yorkshire Post: