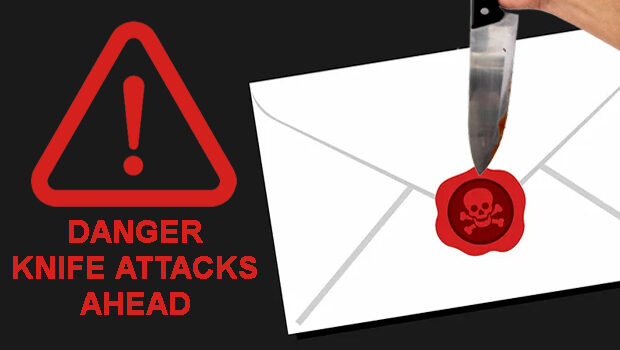 I hope readers will forgive me for deferring a detailed report on the Full Council meeting of Monday 1st November 2021 until a later date.

My deliberations have been interrupted by a remarkable turn of events, the full significance of which becomes immediately apparent when we recall last month’s stabbing to death of Sir David AMESS MP [Con.] (Southend West), and the steps now being taken to ‘beef up’ procedures for the protection of elected representatives. Only last week, a 52-year-old man was arrested for the considerably lesser offence of sending threatening and abusive emails to his MP.

During Item 9 of Monday’s meeting of Full Council, the debate turned to the matter of long-held concerns regarding the safety of elected members who have been subjected to threats of murder and other acts of violence. These crimes have been covered up for far too long.

Receiving no credible assurances, the Conservative Group rose from their seats and, as an act of protest, left the meeting en masse.

On returning home, I noted the following post on social media: 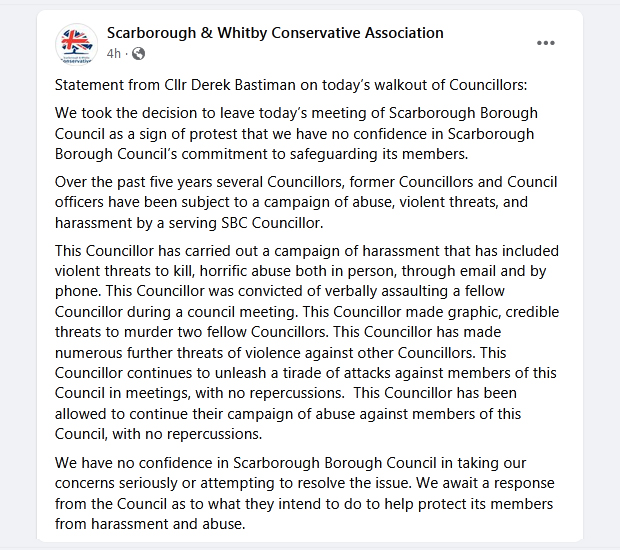 It should be noted that the Conservatives were accompanied by Councillor Bill CHATT [C.I.M.].

Councillors are aware that I have corroborated every element of Councillor BASTIMAN’s allegations from direct personal experience (more of which, later).

Before proceeding, I would ask readers to contemplate the public and political reaction that we might anticipate, in the present political climate, if the Councillor referred to in Councillor BASTIMAN’s statement was not a woman, but rather a man threatening female colleagues. The talk then would not be of Sir David AMESS but of Wayne COUZENS, the killer of Sarah EVERARD.

During the evening, I noted the following post by Neil HERITAGE [Y.C.I.A.] from his private and personal Facebook profile onto his Councillor Neil HERITAGE Facebook page – i.e. Councillor HERITAGE was making the point that his posting should be considered as formal comment, in his capacity as Councillor and not merely as a private individual, a member of the public: 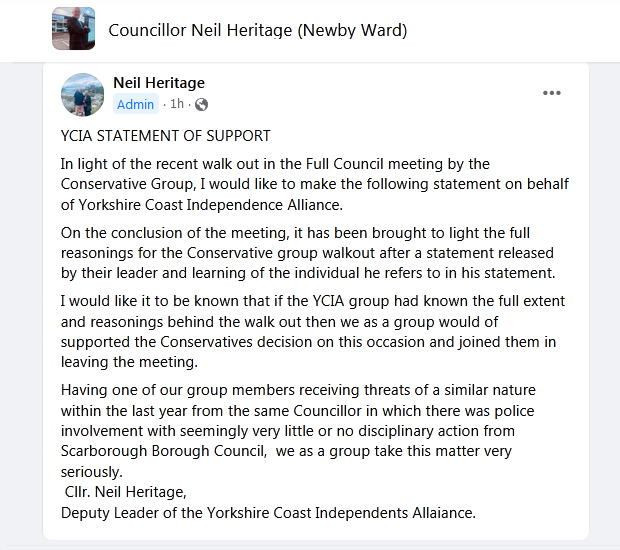 I have also received the following statement from Councillor Mike COCKERILL, Leader of the Cluster of Independent members [C.I.M.], shortly before publication of this article: 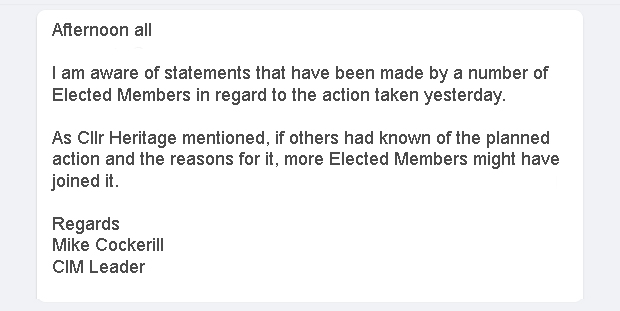 Alderman Norman MURPHY has also provided the Enquirer with the following statement:

“As a victim of the unwarranted and very disturbing threats to which Councillors Bastiman, Heritage and Cockerill have referred I should like to register my support to their valid protest.”

All of this stands in edifying contrast to the remarks made by Councillor Paul RILEY [Ind.], whose ‘special relationship’ with the perpetrator is a source of some concern to more responsible members:

If Councillor Paul RILEY wishes to reduce this very serious issue to petty facetiousness, he must permit me to observe that he apparently treads where even John Wayne BOBBITT would hesitate to go . . .

The identity of the Councillor to whom Councillors BASTIMAN, HERITAGE & COCKERILL – and Alderman MURPHY – refer has been fully exposed in several previous articles here on the Enquirer and on the widely-read web-site of campaigner Andy STRANGEWAY. This is because the hard evidence – as opposed to sworn witness testimony – contains explicit examples of these death threats, including notes, emails and even audio recordings – all of which the North Yorkshire Police has elected to disregard on grounds of the “mental health” circumstances of the perpetrator.

None of which explains why the perpetrator, in such lucid moments as may ever arise, has NEVER uttered one word of apology, remorse or regret to any of her victims.

It has always seemed to me that the risk of injury or death of an elected member (neither more nor less so than any member of the public) should over-ride concern for the perpetrator’s alleged mental health cicumstances, which can be treated or, at least mitigated, without risking injury or violent death to innocent victims.

How serious a crime is it to threaten someone’s life?

The law is to be found under s.16 of the Offences Against the Person Act 1861:

A person who without lawful excuse makes to another a threat, intending that that other would fear it would be carried out, to kill that other or a third person shall be guilty of an offence and liable on conviction on indictment to imprisonment for a term not exceeding ten years.

Ten years in prison seems serious to me.

Earlier in the year, Councillor Janet JEFFERSON [Ind.], Leader of the Independent Group, took six weeks to reject a Formal Complaint against her highly dangerous fellow member – on the risible grounds that her Group’s Constitution had never been signed off by members, leaving her with no formal powers to take any action. Apparently, Item 7 of the NOLAN Principles of Public Life did not occur Councillor JEFFERSON:

This failure to “challenge poor behaviour wherever it occurs” would not, I am quite sure, be acceptable to a victim’s widow or widower, child/children, sibling or parent.

Notwithstanding the foregoing, we now have a Scarborough Borough Councillor – in fact, a member of the Labour-led administration’s allied Independent Group and a Portfolio Holder, Councillor Michelle DONOHUE-MONCRIEFF [Ind.], already twice convicted of violent offences, having engaged in well-evidence acts and threats of violence against political opponents and members of the public, yet still the present Leader, Councillor Steve SIDDONS [Lab.] shies away from taking action to protect his Portfolio Holder and/or her intended victims.

Councillor DONOHUE-MONCRIEFF’s reaction to the protest bespeaks the volatility and lack of self-control that has made members extremely nervous of attending physical meetings:

Councillor SIDDONS’ Lab./Ind. administration remains unperturbed and seems even to welcome this style of ‘debate’.

How much more disgrace can this travesty of a Leader bring down upon our Council?

That question is, of course, rhetorical. A keener question would be:

Why is the Leader tacitly condoning this utterly unacceptable state of affairs?

My opinion is that, such is Councillor SIDDONS’ addiction to ‘power’, he will do nothing to risk eroding his desperately precarious grasp by standing down his Portfolio Holder – even if lives are at risk. Bear in mind that Councillor DONOHUE-MONCRIEFF was the one who ‘leaked’ the Top SECRET ARGOS documents – an ‘offence’ which, according to Monitoring Officer Mrs Lisa DIXON amounted to Malfeasance in Public Office and risked, on conviction, a sentence of life imprisonment. (Some people lead charmed lives).

My opinion is that Councillor SIDDONS will continue to disregard members and residents in pursuit of his flagship ARGOS proposals, his repeated acquisition of over-priced dilapidated buildings (St Nicholas Hotel Travelodge, Pavilion House, Comet), his ego-driven failed attempt at an East/West local government reorganisation, etc, etc, etc – to the end of leaving his indelible stamp on the face of the town – SIDDONS WAS HERE.

My opinion is that Councillor SIDDONS will continue in this indefensible vein – even when lives are at risk.

The Leader, by the way, was not present at the meeting (he has apparently tested positive – for COVID-19 (not, as some wags have suggested, for rabies). His function was assumed by his so-called Deputy, Councillor Liz COLLING [Lab.] who, as ever, conclusively eclipsed her Leader’s customary standard of performance.

There is talk amongst opposition Councillors of boycotting the remainder of Councillor SIDDONS’ term of office. I oppose this strategy, it would give free rein to a number of impending disasters.

The Council Chamber is the proper and only forum in which to challenge Councillor SIDDONS. It becomes increasingly difficult to believe that even the Conservative defectors (Councillors LYNSKEY, MALLORY and MORTIMER) will allow their personal malice to blight the Borough by supporting SIDDONS in what now seems an inevitable Vote of No Confidence.