Readers may recall an article of mine concerning a member of the public who made a Formal Complaint to the Council over an elected member threatening to “kick her arse” (reminsicent of threats to give Councillor Eileen MURPHY “an Irish kicking”). The Complainant also sought an investigation into the the very real possibility that the elected member had used a ‘fake’ Facebook identity.

Following ‘investigation’ by the Monitoring Officer (Mrs Lisa DIXON) and the Independent Person, a Decision Notice was recorded and sent to the Complainant confirming ‘No Further Action’.

“There is no evidence to suggest that the Councillor has a ‘fake’ social media profile. Whilst the two profiles display the same picture, this is not conclusive evidence as the photo can easily be obtained from the publically accessible profile.”

Really? One can only laugh. First there is “no evidence”, then (in the very next sentence) there is “no conclusive evidence”. Make up your mind, Lisa.

No evidence, perhaps, that a deaf, dumb and blind pinball wizard could find – but surely within the compass of that famous bungler, Dr. John H. WATSON, or the North Yorks Enquirer.

As in the case of the ‘leaked’ ARGOS papers, once again Mrs DIXON had only to ask me . . .

By way of a brief digression, on the subject of the ARGOS ‘regeneration’ project (a.k.a. “SIDDONS’ FOLLY”), by the way, I note the article in the Daily Mail under the headline “Graduation stays: Bed down in a student apartment this summer and you’ll be saving a small fortune”, which suggests that the intended students’/nurses’ accommodation will end up offering cheapo deals to visitors, whose cars will further burden the already inadequate parking provision in the Bottom End (i.e. Castle Ward). In another Mail article, entitled “Leading UK universities have refused to end online learning”, we learn (as predicted in the Enquirer) that universities are in no hurry to encourage halls of residence.

Returning to the matter of ‘fake’ identities, readers attention is now directed to two (only two) Freedom of Information requests, submitted to Scarborough Borough Council via WDTK (see featured image at the head of this article), from a person registered on the site as ‘Dave LOWE’, a name which I believe to be an alias – a ‘fake’ profile. 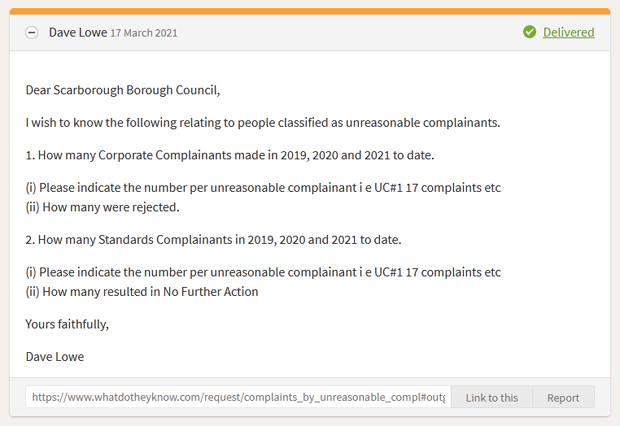 Interestingly, following a complaint from a member of the public, the request has since been redacted by WDTK – but not before I captured a screenshot and downloaded the false allegations. This evidence is now available to the victims’ solicitors. 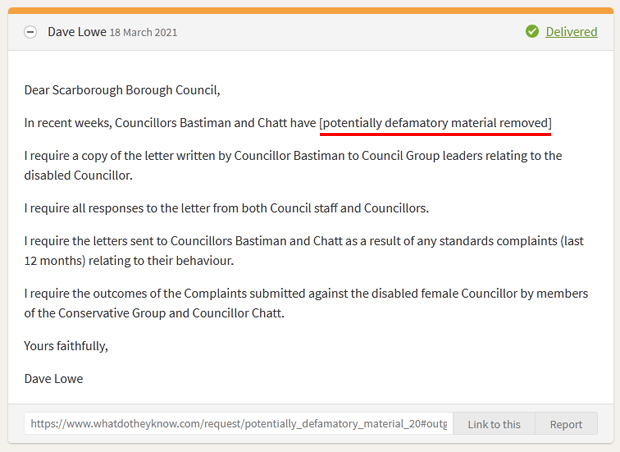 The redacted section contains a wild and unsubstantiable accusation of a hate crime, entirely typical of the established modus operandi of a Councillor whose malicious intent against Councillors BASTIMAN and CHATT (and several others, myself included) has been documented and fully evidenced on the website of campaigner Andy STRANGEWAY. Guess what – ‘No Further Action’!

Given the powers bestowed upon the Council under the Regulation of Investigatory Powers Act 2000 (abused by the Council to ‘justify’ its interception of email correspondence to and from Councillors) and/or the Investigatory Powers Act 2020, one might expect that a discreet enquiry by Mrs DIXON to WDTK would confirm that the errant member’s IP address was common to a number of ‘fake’ identities. Failing that, the North Yorkshire Police could no doubt assist.

That, however, would run the risk of further discrediting Councillor SIDDONS’ judgement – and that would never do.

Fortunately, the ‘protection racket’ is about to be dismantled. Watch this space . . .

Meanwhile, readers are strenuously advised not to speculate about the true identity of ‘Dave LOWE’ on social media. There is no need for that.