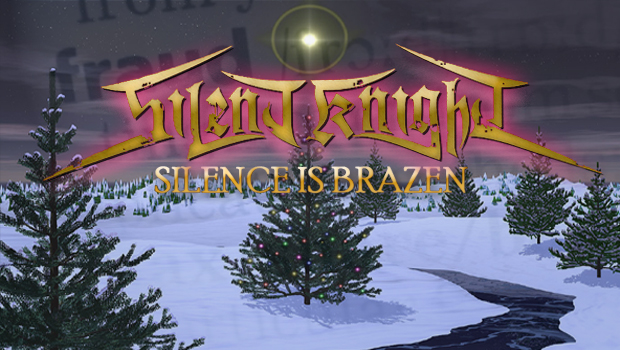 Few election issues have been so hotly contended as the matter of immigration; those who have expressed the wish to regulate the inward flow of immigrants have found themselves subject to venomous accusations of racism. As I have reported elsewhere, one long-serving and hitherto highly respected Chair of the Board of Governors a local school found himself summarily (and unlawfully) dismissed, merely for having joined the United Kingdom Independence Party.

On 15th April 2015, I published an article here on the North Yorks Enquirer entitled “Toxic Tory Trots Out Phony Immigration Figures” in which I reported on some erroneous information in the electoral material of the Right Honourable Sir Greg KNIGHT [Con.]; Sir Greg had claimed a reduction in net immigration of one third during the past Parliament when, in fact, an increase of one fifth had taken place.

I had offered Sir Greg the customary right of reply. Ten minutes before my press dead-line, Sir Greg stoically (and, in my view, rashly) stood by his false claim, citing the following URL-link:

The graphic presented on the Conservatives web page is clearly labelled (in the bottom right corner) “Posted 20/09/2013” – a significant fact which would appear to have eluded Sir Greg’s eagle eye: 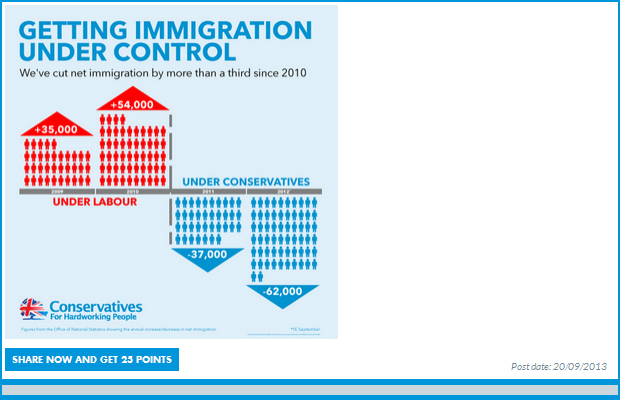 So Sir Greg was citing the net immigration figures from 2013 – i.e. before the onset of the Romanian and Bulgarian ‘goldrush’ from 1st January 2014.

Confronted with the ‘official’ figures from the Office of National Statistics (ONS), Sir Greg has adopted the tried and tested ostrich-like posture of many a career politician.

He has gone to ground.

Here are the up-to-date* ONS figures:

The Office of National Statistics also presents its data in a form worthy of comparison with the Conservatives’ graphic: 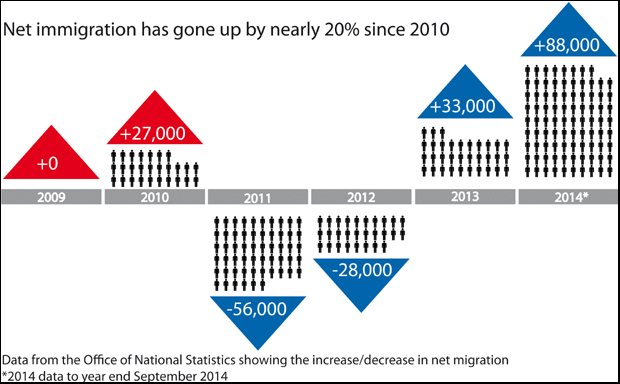 No matter how one looks at it, Sir Greg has grossly misrepresented his party’s record on net immigration.

To set the extent of this gross misrepresentation in a more accessible perspective; for every 30 people per year who arrived in the UK in 2010, Sir Greg is claiming that this has now been reduced to just 20 people per year, when in fact it has actually increased to 36 people per year – not very far short of double Sir Greg’s false claim.

That is a misrepresentation of considerable degree. Its effect is to invite readers of his leaflet to believe that the ConDem Coalition is successfully bringing the distasteful problem of immigration under control and, further, that this is should be considered a good reason to return Sir Greg to Westminster on 7th May 2015 for another five years – five years at a salary of £67,060 per annum (equals £335,300 – a third-of-a-million smackers).

That is the amount (setting aside expenses claims – at which Sir Greg excels) that Sir Greg stands to gain if voters are influenced to vote for him on the basis of the false claim.

Of course, given Sir Greg’s comfortable majority of 13,486, it would be unreasonable to suggest that Sir Greg’s re-election (or otherwise) hinges solely on the ConDem’s immigration record. Nevertheless, every vote counts and in a close finish, one might legitimately view Sir Greg’s misrepresentation to the electorate in a harsher light.

Perhaps this is the explanation for Sir Greg’s silence.

On 18th April 2015, the Hull Daily Mail made synchronistic mention of Sir Greg KNIGHT in an article entitled “Ten unusual facts about East Yorkshire’s General Election candidates”, in which the following nugget appears:

One wonders why a man who has reportedly made scant contribution to Parliamentary debate over the years should be so determinedly hell-bent on re-election as to present his party’s dismal failure as a roaring success.

Perhaps it was sheer sloppiness of research, but surely a diligent MP pays close enough attention to current affairs to have been painfully aware of headlines on 26th February 2015, when the BBC published “Net migration up to 298,000 as Conservative target missed”, a report in which Sir Greg’s colleague James BROKENSHIRE, the Immigration Minister, admitted that:

I struggle to believe that any Conservative Member of Parliament can be unaware of that.

I expect that I am far from being alone in believing that the Right Honourable Sir Gregory KNIGHT should account to the public for false representation.

So I have emailed him offering an honourable resolution to his present untenable position:

I regret having heard nothing further from you on the matter of the rather rash statement made by you on your election leaflets: “We have cut net immigration by a third since 2010″.

You may wish to compare that statement with some alternative forms of words, each of which expresses a similar, though crucially different, statement.

Each of these examples admits the possibility that net immigration may have risen after the moment in time to which the speaker is pointing. Your statement does not. Your statement is finite and definitive:

What distinguishes each of my examples from your statement is that they may well be true, whilst yours – irrefutably – is false. (The distinction, as you know, is that between the present perfect and the past perfect).

In my view, the publishing of election material is a representation. It constitutes a de facto intent to accrue votes, for the purpose of achieving election – a gain. With election, one accrues gain, both in kudos and a significant pecuniary gain in the form of c.£67K per annum salary. For five years.

As a student of the law – a qualified solicitor – you will appreciate that issuing a false representation with intent to make gain for oneself (or  loss to another – i.e. your opposing candidates) is a criminal offence under the terms of s.2 of the Fraud Act 2006:

In deference to your contribution to British politics over the years, I invite you to take the honourable course of action and report the matter to the Police yourself, rather than suffering the indignity of having a complaint made against you by a member of the public, in the public domain.

Please advise me of your decision.

I was looking forward to publishing a response from the Right Honourable Gentleman, but as you may easily imagine, none was forthcoming.

So I emailed Sir Greg once more, just to be sure that he had every opportunity to avail himself of his ‘right to reply’:

I am disappointed that you have found yourself unable to respond to my invitation in a timely manner. This has created the impression that you intend to ‘duck’ the issue until after the election – hardly an honourable course of action.

In the interests of transparency, I would like you to be aware that I am minded to publish an article on the matter during the course of the Bank Holiday weekend.

Should you wish me to include a statement for publication from you – your ‘right of reply’ – please ensure that it reaches me no later than close-of-play (i.e. 5:00pm) tomorrow, Friday 1st May 2015.

Please try to constrain your comments to no more than 300 words. A recent photograph would also be helpful. Thank you.

At the time of publication, no response has been received.