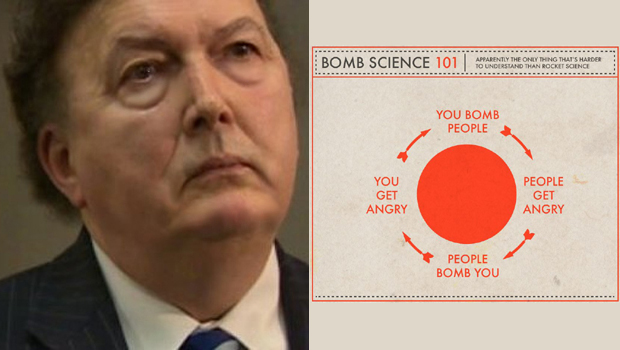 Today’s Guest Author is Dr Richard HAYNES, of Driffield, who kindly shares with readers his emailed plea to his Member of Parliament, Sir Greg KNIGHT [Con.] (East Yorkshire), urging him to oppose the motion to bomb Syria.

To find out how your MP voted, please see our Thursday 3rd December 2015 article “War: Which Way Did Your MP Vote?”.

I am writing to ask you to oppose any air strikes or military intervention in Syria. The Prime Minister wants military action and is planning to bring a vote for such intervention to the House of Commons as early as next week.

The terrible attacks which took place in Paris are being presented as a rationale for bombing. Yet there is no evidence that further bombing will defeat ISIS, and there is much evidence that it can make the situation worse.

We should consider that air strikes in Syria have been going on for more than a year now, carried out by a coalition led by the US. In that time, ISIS has maintained and even increased its size, despite a large number of its members being killed. In addition, most members of the coalition have effectively ended military action. None of the regional states is at present involved, Canada has pulled out and Australia has suspended its bombing. Only France, the US and Russia are currently involved in attacks.

The shooting down of a Russian plane by Turkey underlines the danger of the situation escalating out of control. This is not a time to start further military action.

We should also reflect on the consequences of previous such interventions. The wars in Afghanistan, Iraq and Libya continue, and terrorism has increased in all those countries, and many more, in the 14 years since they began.

Two years ago, Cameron lost a House of Commons vote to bomb Syria. Then he wanted to bomb Assad’s forces, but today he wants to bomb ISIS. The truth is that further bombing will do nothing to help the people of Syria. ISIS is a product of war, and has been helped to grow by Western allies such as Turkey and Saudi Arabia.

There is no comprehensive and clear EU plan in place to provide humanitarian assistance to the large number of refugees which will result from further bombing. In fact, the EU refugee plan is unravelling and the approach to refugees is highly fragmented. Nor is there a clear and unambiguous UN authorisation for the bombing of Syria.

Plans for military action are not subordinated to diplomatic efforts, but instead largely replace them. Also, it is not in practice possible to direct attacks solely at military targets. Evidence suggests that around 90% of drone strike victims are unintended casualties.

It is important that we learn from history. It is now widely accepted that Western interventions in Afghanistan, Iraq and Libya have had disastrous consequences. There is no reason to think that Syria will be any different. As my MP, I ask you to stand against military escalation.

Thank you for contacting me about British action in Syria.

The United Nations has passed a resolution calling for all necessary measures to eradicate the safe haven Daesh has established in parts of Iraq and Syria. France, the United States and our regional allies are asking for UK support in Syria, because we provide between a quarter and a third of the coalition’s high-end strike capability. The coalition needs the capability and capacity that we can offer. We cannot expect others to shoulder the burdens and the risks of protecting this country.

As you are no doubt aware, British MPs of all parties have now voted to extend our military campaign against Daesh into Syria.

Daesh poses a very direct threat to the United Kingdom.  They have murdered British hostages. They’ve carried out the worst terrorist attack against British people since 7/7 on the beaches of Tunisia. In the last year our security services have foiled seven different plots linked to, or inspired by, Daesh. The Paris attacks brought this terror to our doorstep. This threat is very real.

The RAF has already played a key role in degrading Daesh and have helped local forces to recover 30 per cent of the territory Daesh had captured. In 14 months of airstrikes the Government is confident that British Forces have not caused any civilian casualties.

However, it is in Syria that Daesh has its headquarters and from where threats against this country are being planned and orchestrated. Daesh does not recognise a border between Iraq and Syria and neither should we.

That is why a large majority of MPs support the extension of our military campaign against Daesh into Syria to protect our own security.  The horrific attacks in Paris, Mali, Lebanon, Egypt, Sousse, Turkey, Kuwait, Australia and elsewhere, demonstrate the very real and evolving threat from Daesh. I believe it is necessary for Britain to extend our military campaign against Daesh into Syria to help keep Britain safe, as do many other politicians including senior Labour MPs Margaret Beckett MP and Hilary Benn MP..

Thank you again for taking the time to contact me.