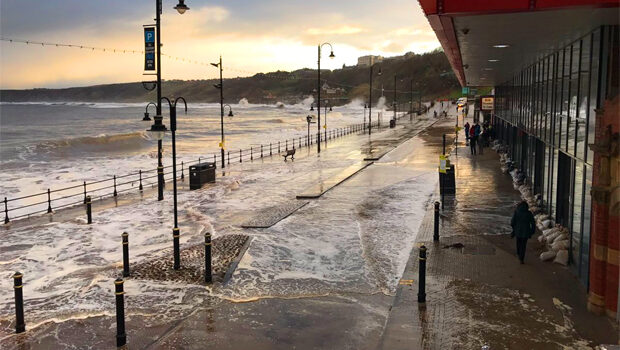 COP26 is an acronym for Conference of the Parties 2026 – the global attempt to address climate change and rising sea levels. It has figured in the news headlines as top item on the agenda in recent weeks and has been characterised by Prince Charles as “literally the last chance saloon” to save the planet.

COP[OUT]22/23 is my jokey reference to the Council’s perilous task of setting a Budget for 2022/23 – the final year of the Council’s existence.

Over the weekend, nearly 200 countries agreed to stringent measures to combat climate change in an effort to turn back the tide of rising sea levels.

At the meeting of Full Council on 5th September, a motion proposed by Councillor Theresa NORTON [Lab.] – best known to readers (and, indeed, the nation) as a luminary of Insulate Britain, the universally criticised activist group that has been making national headlines throughout a lengthening series of blockades of motorways and ports – proposed the following motion, which was carried virtually unanimously:

I. Declare an ecological emergency;
II. Support the Climate and Ecological Emergency Bill;
III.  Inform the local media of this decision;
IV. Write an open letter to Robert Goodwill MP (shared with our residents through local and social media) urging him to sign up to support the Bill;
V.  Write to the CEE Bill Alliance, the organisers of the campaign for the Bill, expressing its support (joinus@ceebill);
VI. Work with partners locally and regionally to drive coordinated leadership and collaborative action to aid the recovery of nature and natural environments and identify areas for habitat restoratio;.
VII. Request Overview and Scrutiny to look in detail as to what measures council can take to protect wildlife and wildlife habitats and keep this as a standing item on Overview and Scrutiny to be reviewed at regular interval.

It is against this background of concern over rising sea levels that the following Recommendation (on the Agenda for the meeting of SBC’s Cabinet on Tuesday 16th November 2021) will be put to the Leader and his Portfolio Holders – coincidentally, the same day that Councillor NORTON’s son Liam NORTON is scheduled to appear at the Royal Courts of Justice to face allegations that he and 8 others have breached a High Court Injunction with their motorway obstruction escapades. According to the attached document, Councillor NORTON appears on the list of activists likely to face similar action in due course.

It appears that, at Item 7 on the Cabinet Agenda, s.151 Finance Director Mr Nick EDWARDS will be attempting some further damage limitation of his own. He will be urging Cabinet to approve of him shuffling some money from one pile in the Council’s coffers to another, in anticipation (I am not alone in suspecting) of certain difficulties arising in the setting of the Council’s 2022/23 Budget – already looking to be a tricky task in light of the likely impending Court Judgment directing SBC to transfer millions from the General Fund to the ring-fenced Whitby Harbour Undertaking account and the Minimum Revenue Provision (MRP) ‘fudging’: 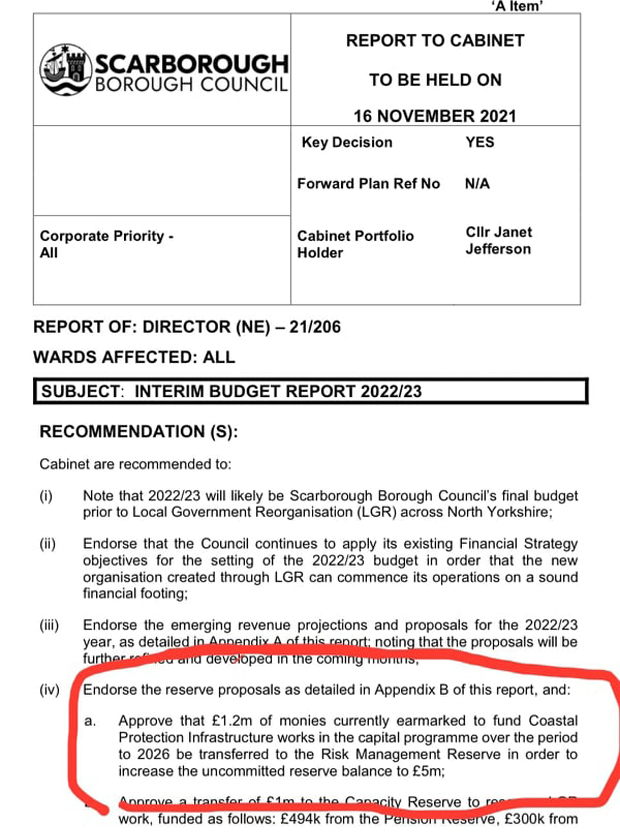 Ice caps are melting; coastal and low-lying cities and towns (like ours) are in danger of being overwhelmed by unprecedented sea levels; Swedish teen phenomenon Greta THUNBERG is warning that risinge sea levels will become “unmanageable” and our very own climate activist Council NORTON is courting imprisonment in pursuit of her commitment to a greener future and our whole Council has signed up to her concerns regarding an Ecological Emergency – and yet s.151 Officer EDWARDS wants to pull £1.2million away from Coastal Protection to top up the Council’s Risk Management Reserve to £5million.

To my simple mind, the official Reason provided to Cabinet by Mr EDWARDS appears less than compelling – or even “open and transparent”:

To provide information relating to the Council’s financial performance for the 2021/22 year, including updates on the financial impacts of the Covid pandemic and obtain the in-year financial approvals needed to meet the requirements of the Council’s constitution and financial procedure rules.

The Council’s “Ecological Emergency” Resolution is not mentioned.

One wonders whether or not Cabinet Portfolio Holders will be satisfied by that Reason for Recommendation. It would be encouraging to discover that Mr EDWARDS will be pressed into providing a clear explanation of exactly what pressures he anticipates the Risk Management Reserve is destined to face, beyond the minimalist overview presented in his Report. Given the SIDDONS administrations’ history of allowing the tail to wag the dog, one cannot be hopeful.

At a time when Council revenues are booming and surpluses (according to this Report, £895K surplus from sales, fees and charges; £870K surplus from business rates; £835K surplus from parking and £150K surplus from planning – from a Council perspective, COVID-19 has been very good period for business) could be directed to worthy projects in line with Councillor NORTON’s strongly-supported motion (for example flood prevention), it would appear that Mr EDWARDS is more concerned about filling in a hole of his own digging than protecting homes and businesses.

In my view, every Councillor who supported Councillor NORTON’s motion should be raising hell about this. But will they?

It will be interesting to see whether Cabinet (comprising 4 Labour and 3 Independent Group members) sides with the Resolution of Full Council – or with the oblique rationale of Mr EDWARDS.

This is particularly so in the case of Councillor Janet JEFFERSON, Leader of the Independent Group and Cabinet Portfolio Holder for Corporate Resources, whose ward is Castle Ward, which includes electors whose businesses on Foreshore Road and Sandside are most at risk of rising sea levels. Councillor JEFFERSON also sits in the Castle Division of North Yorkshire County Council (NYCC) and thus carries a double responsibility to her electors. NYCC also trumpets its commitment to fighting climate change.

Disturbingly, the September 2021 Risk Matrix is light on Mitigation and contains no Action Plan. Note, too, the listed Consequences: