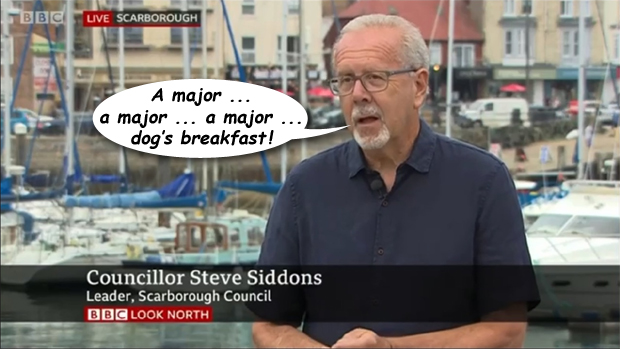 Readers may be aware that, following a Formal Objection to the Accounts of SBC for 2015/16 (and subsequent years) – on the grounds that revenues from Whitby Harbour and its adjacent ‘lands’ have, contrary to legal requirements, been directed to the General Reserve Funds (and NOT ring-fenced for the maintenance and development of the Harbour) – the Council’s External Auditors (MAZARS) have served a Statutory Recommendation calling on the Council to make an Application to the Court to rule on the extent of the ‘lands’, the volume of revenue concerned and the Council’s accountancy methodology over a considerable number of years.

For the avoidance of doubt, the accountancy aspects of the Objection fall within the remit and professional responsibility of SBC s.151 Officer and Financial Director Mr Nick EDWARDS.

The responsibility to ensure that the Council acts within statutory requirements resides with the Monitoring Officer and Director of Legal Services, Mrs Lisa DIXON. 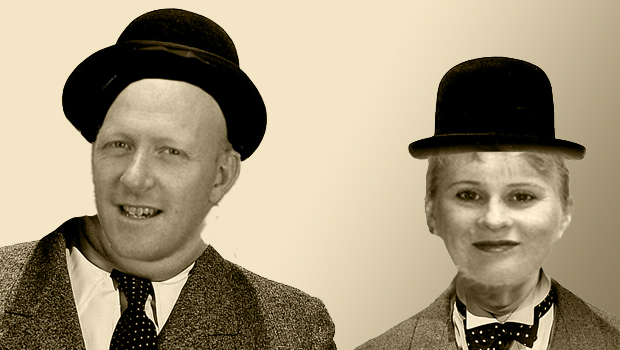 The Council has attempted to address this latest “fine mess” within the purview of meetings of the Audit Committee (Thurs. 22nd July 2021) and an Extraordinary Meeting of Full Council (Fri. 23rd July 2021).

It will be a matter of some regret – at least to SBC Leader Councillor Steve SIDDONS [Lab.] – that these meetings fell hard on the heels of a disastrous interview the Leader gave to BBC Look North on Thursday 21st July 2021, in which he succeeded in confirming that the widely-held suspicion that he is completely inadequate to the task in hand is by no means unfounded.

I watched the YouTube ‘live stream’ of the Audit Committee virtual meeting (via Zoom) held on Thursday 22nd July ‘live’. The business transacted may have been obscure to many viewers but it did include certain items of interest – of interest insofar as they had the potential to illuminate the sole substantive Item on the Agenda at the Extraordinary Meeting to be held the following day; namely, what action the Council should take in respect of the External Auditor’s  (MAZARS) Statutory Recommendation (covered in detail in my article “The Rape of Whitby Harbour” (pub. 7th July 2021).

The ‘Public Questions’ section of the Agenda featured a Question from prominent Scarborough businessman, Mr James CORRIGAN, which elicited some ‘clarification’, as follows:

The significance of this is that, should the Auditor determine a ‘material uncertainty’ (which surely this present catastrophe must be), then the question arises as to how the Council can fulfil the legal requirement to set a balanced budget.

Only the opinion of the co-opted independent member of the Audit Committee, Mr Jim BRACE (i.e. that Full Council should accept the External Auditor’s Statutory Recommendation and apply to the Courts to rule on the Objection(s) and the Council’s accountancy methodology) avoided the can being kicked down the road without comment. Curiously (or not), Finance Director Mr Nick EDWARDS remained silent throughout – as did Harbours Portfolio Holder, Councillor Janet JEFFERSON [Ind.].

Of even greater significance was Agenda Item 9 REVIEW OF ACCOUNTING TREATMENT – MINIMUM REVENUE PROVISION (MRP), which elicited the following information:

“A change in accounting estimate is an adjustment of the carrying amount of an asset or a liability, or the amount of the periodic consumption of an asset, that results from the assessment of the present status of, and expected future benefits and obligations associated with, assets and liabilities.Changes in accounting estimates result from new information or new developments and, accordingly, are not corrections of errors.”

In lay terms, I understand this to mean that the accountancy methodology should never be amended solely to make things look a little more ‘kosher’.

Moreover, this change in accounting policy may prove a significant factor in the Court’s determination, as the timing of the change may be construed as clear demonstration that the Council expects to lose.

So the salient question is this:

Has the Council adopted this change in an attempt to mitigate the extent of the expected negative impact on the General Reserves when the Fight4Whitby Objection(s) is/are upheld?

This key question, over the heads of most members, was to arise within less than 24 hours.

I attended the meeting (YouTube video here) in company with two others, vastly more knowledgeable on accountancy issues than I.

The meeting was opened by the Mayor, Councillor Eric BROADBENT [Lab.] at 11:06am.

Apologies for absence were received from (by grouping; Cabinet Portfolio Holders in bold type):

(i.e. 6 Councillors from the Lab./Ind. alliance  – the administration)

There may have been other absentees. I do not recall seeing Councillor Sue TUCKER [Lab.], for example – whose absence would extend the total of absentees to 12. In any event, one quarter of the total Council membership (46) failing to represent their electors on what is undoubtedly the most significant Council issue arising for many, many years is nothing short of deplorable.

What a missed opportunity to call a Vote of No Confidence in Councillor SIDDONS and his Cabinet when a determining number of his misguided ‘supporters’ (6) were, for one reason or another absent – and perhaps hoping, with one eye on the forthcoming elections to the new North Yorkshire Unitary Authority, to distance themselves from this final SBC fiasco.

Once again, it was Scarborough businessman Mr James CORRIGAN (whose technically detailed series of public interest Questions lodged over the course of the SIDDONS administration have, I am given to understand, been prepared by one of the north’s pre-eminent law firms, Lupton Fawcett LLP, in conjunction with impeccably qualified and experienced forensic accountants), who has to date invested (I am assured) something in the order of SBC CEO Mike GREENE’s annual salary in pursuit of the truth. Now that is what I call ‘acting in the public interest’.

In simple terms, Mr CORRIGAN asked if the Council had considered the requirements of the Whitby Urban District Council Act 1905 prior to notification of the Fight4Whitby formal Objection to the 2015/16 accounts.

Mrs DIXON responded by stating that the answer to Mr CORRIGAN’s Question was contained in her Recommendation to Council.

Mr CORRIGAN then pressed Mrs DIXON to clarify whether or not the Council had considered the Whitby Urban District Council Act 1905 before or after the Fight4Whitby Objection to the 2015/16 accounts was received by the Council.

Only then did Mrs DIXON confirm that it was after the Objection – a tacit admission that, hitherto, she had been ‘asleep at the wheel’ since her appointment in 2012/13. But I doubt that more than a small handful of Councillors registered this astonishing admission.

As I subsequently commented to my colleagues:

“How can the Council whose inception (under the terms of the Local Government Act 1972, which came into force on 1st April 1974) included its replacement of Whitby Urban District Council, conceivably have been unaware of the requirements of the Whitby Urban District Council Act 1905, specifically the requirement to ring-fence the revenues from Whitby Harbour and its ‘lands’?”

“Was this incompetence – or negligence?”

In my view, Mr CORRIGAN might well have added:

“Or was it deliberate? Was it, in fact, a ‘fudging’ of the accounts for the purpose of salvaging an otherwise unbalanceable budget?”

Following his Public Question, Mr CORRIGAN presented the Council with a book famous in accountancy circles – a gift to the Council – then took his leave.

A number of Councillors have now confirmed that the book is “Accounting for Growth: Stripping the Camouflage from Company Accounts” by Terry SMITH (ISBN: 9780712652803) – known colloquially as “The Fudger’s Bible” – highlighting the abuse of accounting techniques to make companies look much better than, in reality, they actually are. The book features several examples of major collapses following the use of the very same techniques (including the change of depreciation accountancy) now adopted by SBC. 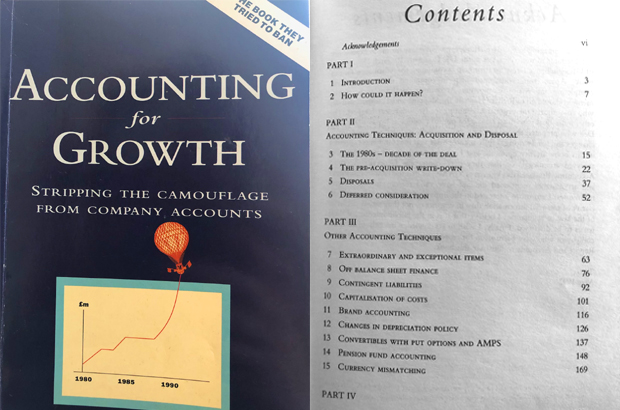 Or rather, allow me to explain the crucial distinction as I see it.

Mrs DIXON’s Recommendation is as follows: 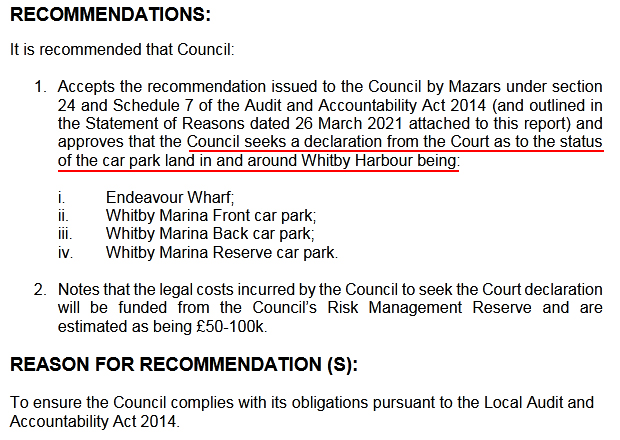 However, it is made clear in historical documentation that the ‘harbour undertaking’ comprises not only the riverbed of the Esk estuary, to the high tide mark, all the way to the Ruswarp Weir, but also the reclaimed land between the former Bell Island and the western bank (as well as the shoreline for 1½ miles to the west of the West Pier and 1 mile to the east of the East Pier). Thus, the harbour ‘lands’ may ultimately be declared by the Court to include the Spa/Pavilion, the beach chalets, Battery Parade, the new toilets, the Fish Quay, Dock End (including the former TIC building, now “The Star in the Harbour”), and perhaps even the former railway goods yard and the Co-Op.

One is reminded of Mr CORRIGAN’s parting shot:

“Was this incompetence – or negligence?”

I will also gloss over Leader SIDDONS’ incomprehensible intervention, which reminded many of his bungled Look North interview. Another “dog’s breakfast”.

The tremulous quality of Mrs DIXON’s voice betrayed her apparent anxiety that the likelihood is that the roof is about to fall in on her and Mr EDWARDS, who once again sat speechless throughout . . .

Interested readers may view the video and draw their own conclusions. I can comment only on my own.

The upshot is that, despite Labour attempts to block the Amendment, Councillor CHANCE won the day; the Council’s Application to the Court will reflect the MAZARS Recommendation.

The people of Whitby owe hearftelt thanks to Councillor CHANCE and the Fight4Whitby group.

The people of the Borough of Scarborough owe heartfelt thanks to Mr James CORRIGAN.

And finally, hats off to the ‘suit’ on the yacht for applauding the dunderhead on the pier (at 00:38 secs):