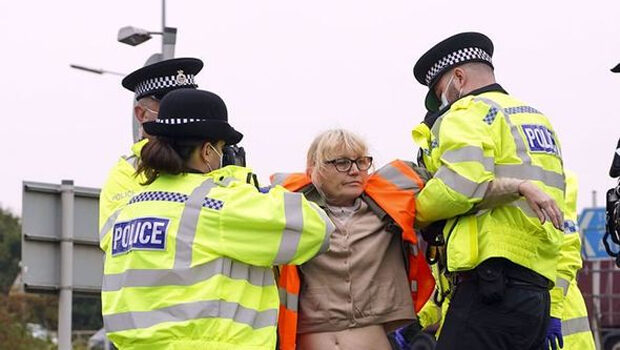 A Letter to the Editor from NYE Police & Crime correspondent TIM HICKS, commenting on the extreme anti-social behaviour of a SBC Labour Councillor – and the subsequent widespread public demand for her immediate resignation.

Readers wishing to learn more about the potential disqualification from office of errant Councillors are referred to this Law Gazette article.

I read with disbelief that Scarborough Borough Councillor (SBC) Labour Party Councillor Theresa Norton (pictured above) who, acting in joint enterprise with others, blocked the M25 as part of an “Insulate Britain” (an off-shoot of “Extinction Rebellion”) protest.

She was arrested on Friday blockading the Port of Dover by gluing her hands to the road – thereby diverting more police away from protecting the public – at a time when the public is facing shortages.

According to this Daily Mail article she was arrested four times that week disrupting traffic on the M25.

According to this Daily Mirror article, the disruption by Councillor Norton and her “Insulate Britain” colleagues resulted in a woman who was having a stroke, being rushed to hospital by her son, was left waiting in a traffic jam for six hours. As a result, she is now paralysed. Her son said:

“I was there with my mother for six hours watching her slip away and I could do nothing. When we got her to hospital, the Doctors said if we had gotten to them within ninety minutes, her symptoms would have been minimal.

Because she’d been left to endure a stroke for six hours she’s got complete paralysis now down her left side”.

Councillor Norton is not stupid. She must know that the actions of herself and her co-conspirators in disrupting traffic risks loss of life or serious injury to innocent people.

Predictably this has now come to pass and an old lady is now paralysed because of the co-ordinated actions of Councillor Norton, her son Liam, and their friends.

“Insulate Britain” justifies its actions on the basis that they are intellectually and morally superior to the rest of us and acting for a higher moral purpose. This, therefore, allegedly allows them to break the law, ignore the democratic process, inflict disruption on the rest of us and, if necessary, inflict serious injury or death on innocent people, in an attempt to force a change in government policy.

It is only a matter of time before someone dies in an ambulance that is delayed in a traffic jam or in a road traffic accident caused by “Insulate Britain”. They must know that. Yet still they persist.

The arguments for and against “Insulate Britain” are very well put in this televised debate between journalists and “Insulate Britain’s” spokesperson, Mr Liam Norton. Mr Norton would not admit that his home was not insulated, refused to accept any responsibility for the inevitable consequences of his organisations actions and compared himself to Winston Churchill. Mr Norton then stated his demand that “the Government issue a meaningful statement and if they refuse to do it”-  whereupon a journalist interrupted and said “you’ll kill people”. In my opinion, this perfectly sums up his position. Having issued his ultimatum, Mr Norton refused to enter into any further debate and walked out.

The actions of “Insulate Britain” now verge on domestic terrorism.

“During the spring bank holiday in May, a local labour Councillor, Theresa Norton, sat in the middle of the street, in the middle of Scarborough, on the first weekend when many of our hard pressed tourist businesses were keen to make up some of the money they’d lost during the pandemic and caused a massive traffic jam, supposedly demonstrating in the cause of Extinction Rebellion.”

On a personal note, and to avoid allegations of bias, I wish to state that I am not politically active and would take the above line whatever political party Councillor Norton was aligned with. I agree with insulating housing in Britain. My own flat is not insulated, but I am working with the freeholder of the building it is part of to have every flat in the block double-glazed by the beginning of next year. I do not own a car and use public transport.

By way of comparison, Councillor Norton drives a diesel car and lives in a flat where all the windows are single-glazed because it is the subject of a conservation order. It therefore seems to me that, if she was truly sincere about her views and was prepared to break the law, she would have insulated her home as a matter of conscience. The fact that she has not done so makes her appear to be a hypocrite.

But that, of course, is a matter for her own conscience unconnected to her position as an SBC Councillor.

I have sent SBC Labour Party leader Councillor Steve Siddons and Councillor Norton a draft copy of this article asked for a media statement. None has been forthcoming.

This may be because, as a local journalist who has criticised some SBC Councillors in the past, I am on the SBC’s unlawful  “vexatious list”, as a result of SBC abusing the powers of the Regulation of Investigatory Powers Act (originally intended to be used against terrorists and criminals) to intercept my emails to Councillors.

I have no doubt that the sickening hypocrisy of a Labour-led Council abusing anti-terrorist legislation and powers of surveillance to protect a Labour Councillor who routinely commits criminal offences and endangers life will not be lost on the NYE’s readership.