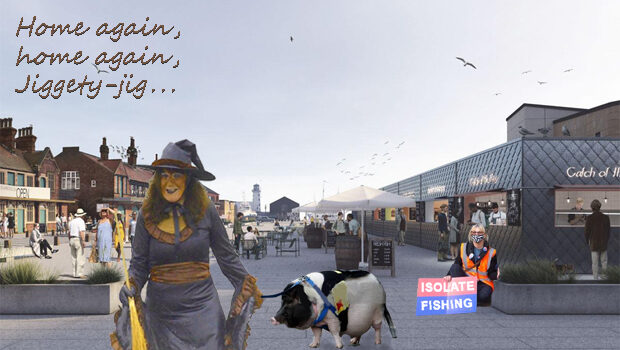 The meeting of SBC’s Full Council, held at the Spa at 2:00pm on Friday 25th February 2022 turned out to be (as has become the norm) an acrimonious affair – enlivened only by the typically transparent skullduggery exercised throughout the first few Agenda Items. (See also NYE Harbours correspondent ALLAN ROBERTS’ superb article here).

Within the context that Scarborough Borough Council purports to be a democratically mandated public body legally bound to provide services and amenities to the c. 110,000 residents of the Borough, it ought to be astonishing to encounter such Machiavellian manoeuvering in the evasion of “openness and transparency” – were it not a commonplace at this bent and twisted parody of public service.

“The ravings of a loony keyboard warrior”, some will say, on reading the foregoing – to which I respond with a classic example that any adult can easily understand – except, perhaps, those greenhorn elected members who still believe that all is as it should be within this scurrilous administration.

The Council’s Constitution ‘grants’ the privilege to any member of the public to ask a Public Question at Council – bound, of course, by any number of constraints and conditions. The one that concerns us here is that Public Questions must be submitted, for approval, no less than 3 clear working days ahead of the meeting at which they are to be asked.

In conformity with all those conditions, there were three Public Questions (a fourth, from Mr James CORRIGAN, was ‘disqualified’ on highly suspect grounds). It was interesting to note that Mr CORRIGAN nevertheless attended and was accompanied by one of the most prominent figures in the Scarborough fishing fraternity.

But it is the Question from Mr Peter LEE – a successful Scarborough businessman, well-known for (amongst other ventures) having purchased part of the Futurist Theatre, which he subsequently sold to the Council in the late 1990s – that interests us here.

Mr LEE’s Public Question – directed to the Portfolio Holder for Corporate Resources (inc. Harbours), Councillor Janet JEFFERSON [Ind.] – addressed two important issues: (i) the fact that the West Pier Regeneration ‘Masterplan’ proposes reducing car-parking spaces from 105 to 35 (and we know, from the myriad objections to the absurd ARGOS ‘regeneration’ project, that parking spaces are already desperately thin on the ground throughout Castle Ward), and (ii) the fact that, during Mr LEE’s ownership of the Futurist, he was refused consent by the Council to operate an indoor market at the Theatre, on the grounds that the Scarborough Market Royal Charter of 22nd January 1253 prohibits the operation of any market within a six-and-two-thirds mile radius of the Market Hall on St Helen’s Square. Readers will recall that there have been a number of Council-sanctioned Markets in recent years. A projected revival of Scarborough Fair was blocked in 2016 because the site (at Lebberston) was only 5.8 miles from the Market Hall in St Helen’s Square. Of course, Seafest is arguably another case in point – when one considers its proximity to the Market Hall – and the legal definition of “Charter Market”:

In short, a protected monopoly within the prescribed area.

As outlined above, Councillor JEFFERSON had three working days to explain to Mr LEE that, because of her disclosable interest in Seafest,  she would (very conveniently) need to defer to another member of the Council to answer his Public Question. But she did not do so. Instead, Councillor JEFFERSON used the opportunity arising at Agenda Item 1 Declarations of Interest to side-step Mr LEE’s Question as it were ‘out of the blue’:

“I understand that today there’s a Question to do with the Pier and stalls and it refers to SeaFest and it’s just that I chair Seafest and have done since 1999.”

So Councillor JEFFERSON’s ‘interest’ in Seafest conveniently excluded her from taking any part in providing a response to Mr LEE. Olé!

Thus did Mr LEE find his forthcoming Public Question, at Agenda Item 4 Public Question Time, deftly shuffled across to the Leader, Councillor SIDDONS [Lab.], by the well-scripted  Mayor, Councillor Eric BROADBENT [Lab.]. (Who was it who said, “Vote Independent; Get Labour”?).

Nevertheless, Mr LEE did ask his Question (readers may watch and listen here) and, entirely predictably, it was duly dodged by the Leader (seizing on his clearly pre-programmed ‘assist’ from the Mayor to volley Mr LEE’s Question far into the long grass) with the following words:

“Thank you, Mr Lee, for your Question. Erm. I am advised by our legal colleagues that this is . . . that this is a complex issue . . . and it will be best to provide you with an answer in writing, to make sure that all the various elements are included. I hope that’s satisfactory to you.”

“Well, it’s not satisfactory, is it?”

It certainly is not. A concerted act of manipulation has ensured that the answer to Mr LEE’s Public Question has been swept out of the public eye.

And I have bad news for Mr LEE; according to the plans that I have seen, the public car-parking space provision on the ‘regenerated’ West Pier is ZERO. I wonder where the stallholders are intended to park?

To summarise: Having in the past relied upon the Royal Charter to scupper Mr LEE’s Futurist venture, the Council is now pretending that it is fine and dandy for it to run market stalls on the West Pier (where Harbours Portfolio Holder, Councillor Janet JEFFERSON, chairs her precious Seafest) within just a few hundred yards of the Market Hall. Double standards?

On the evening of Friday 25th February 2022, following his contemptuous treatment at the hands of the Lab./Ind. administration, Mr LEE wrote to all SBC Councillors and Scarborough & Whitby MP Sir Robert GOODWILL [Con.], in the following terms:

All of you at today’s meeting witnessed the woefully inadequate response to my question and the contempt I was shown. I need to respond.

Councillor Siddons after having had plenty of notice of the question, stated that the answer is “complex”  and he would write to me. This of course avoids the public seeing the response.
The answer is in fact simple;
As the royal market charter (set up to protect the market and existing traders) stands today “Seafest” has an illegal status and any future markets as proposed would also be illegal.
2 weeks ago I asked where the cars from the 70 out of 104 permanently lost spaces would go. Councillor Siddons again not wishing to go public replied to me in writing;
This is not an issue. The existing capacity in the south bay public carparks will accommodate this loss.
Bearing in mind by 10.30am today all the carparks were full and the usual parade of cars driving round looking for a space had started, can any one of you honestly agree with this response ?
I live on [REDACTED].  I have had a business here for 30 years. I love the place and my heart is here.  It pains me to see such treachery from our own representitives who should be working and consulting with all of us… the local residents, the fishermen and the local businesses.  We do have the answers. It is so much more simple.
Wasting multi millions of pounds of monopoly money on outside consultants promoting harmful and dubious schemes in secret is just repeating all the clearly visible past mistakes.
This west pier Scheme is not regeneration it is a money maker at the expense of the very people you, our own representitives, should be looking out for.
This email is sent in the hope we can change things for the better from a man who loves and lives Scarborough
Thank you ….. Peter Lee
An amusing corollary to this turn of events is that I was later informed that the Council is struggling to locate its own copy of the Royal Charter. My offers to assist the Council are invariably disregarded but I am always open to future enquiries . . .

At the time of writing, I can report with some confidence that Mr LEE has received only one response to his email (via private – not Council – email), from an elected member who is immune to blandishments and threats. I am reminded of Victor HUGO’s famous epithet:

“The only thing necessary for the triumph of evil is for good men to do nothing.”

The Answer(s) . . .
I can also confirm that the Scarborough fishing community has been galvanised as never before by the present administration’s attempts to marginalise Scarborough’s fishing industry and (though I have seen nothing in writing) there is talk of massive direct action – I know not in what form.
One possibility falls within the scope of reasonable conjecture. Given that the Labour-led Council has publicly endorsed the criminal actions of Insulate Britain fanatic, Councillor Theresa ‘Gluey’ NORTON [Lab.] – or so the Scarborough News has reported (under the title “Insulate Britain: Jailed councillor to remain part of Scarborough’s Labour Group”) – one can easily imagine hundreds of crab/lobster pots (and their owners) super-glued to the West Pier car-park some busy weekend in the not too distant future. And there are a number of ‘heavy hitters’ at the Yacht Club who would be irate to find themselves land-locked by the fishing fleet’s blockade of the Harbour mouth. The Daily Mail would be all over that like a tramp on a fiver. There would be Questions in Parliament. One can imagine the sport our Tory PM would have lambasting a Labour Council which sticks out like a bubo on the face of God’s Own County.
One way or another, the “tail” (the rogue Officers) may struggle to wag the “dog” (the elected members) on this occasion.
We have an election nine weeks away, on 5th May. The prospective Labour Candidates are all too aware of the negative publicity surrounding their Party’s litany of failures and rightly fear that they have rendered themselves unelectable. It may be too late now to feign support for the Harbour community . And the matter of the Leader’s apparent lies to Council over the non-existent Flamingo Land negotiations, along with his conspicuous failure to disclose his close personal acquaintance with the delighted vendor of the maisonette at 1 St Helen’s Square, has now rung alarm bells in the parliamentary circles. Fact.
In happier times, it may be that the fishing community and the entrepreneurial business leaders of Castle Ward might have made the strangest of bedfellows. Confronted by a corrupt and self-serving local authority already in its death throes, I predict that they will presently mobilise in common purpose to save the town and the Borough from ineptitude, stupidity and greed. They may well be joined by the artist community, as the Scarborough News has reported.

To add insult to injury, meanwhile, an election-conscious Councillor JEFFERSON is reported (on This is the Coast) as responding to the current “shellfish mortality event” by telling fishermen they had the Council’s support “where possible”. She concludes: “We shall do what we can”. I cannot take much succour from that. I mean, where will they find the money? From the West Pier parking returns?