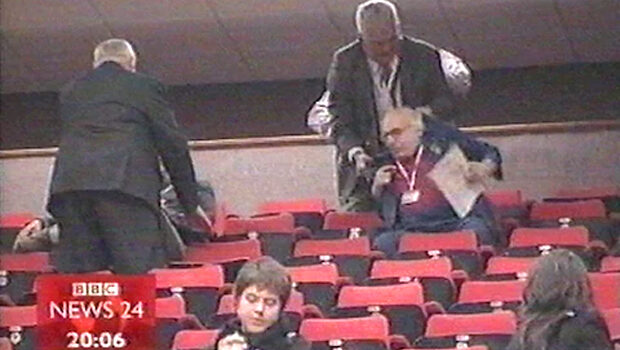 For many years, NYE community journalist Nigel Ward has been peacefully attending Scarborough Borough Council (SBC) meetings to report to the NYE’s readership on Council affairs in Scarborough.

This is a standard, normal activity and typical for a local media outlet, aimed at keeping local people in touch with what is going on. It is an essential part of local democracy and freedom of speech that the public can attend meetings and that journalists can report on the proceedings of Council.

The Council meeting on Monday the 9th of May 2022 was no exception. Nigel attended in the public gallery, in the normal way. He was accompanied by fellow local government commentator and campaigner, Mr Andy Strangeway.

Here Nigel relates in his own words what happened:

“The meeting was interrupted by what the Mayor (Chair), Councillor Eric Broadbent [Labour], announced as a 5-minute adjournment, due to a persistent ‘problem’ with the public address system.

From our position, central in the gallery, the sound was fine. But:

The adjournment proved to be longer than anticipated. When the Mayor resumed his duties, he neglected to re-instate the meeting following its adjournment.”

Here, I quote Andy Strangeway’s account of what happened next:

“As the meeting had not been reinstated after a break, to assist the Mayor, I attempted to draw his attention to this from the public gallery, with a Point of Order. Of course, without such a reinstatement, there was no meeting.

Sadly, the Mayor treated me with contempt and attempted to silence me when he should have held himself in contempt for failing in his duty to reinstate the meeting. At no time was I thanked for my assistance in the interests of good governance.

Instead of thanking me for my assistance, two very heavily built uniformed “heavies” from SBC’s Security, were sent to confront myself and Nigel. They falsely claimed that we were disturbing the meeting. This was clearly incorrect as there was no meeting in progress, as it had not been reinstated.

I observed both “heavies” to be out of control in their behaviour. Indeed one was physically shaking. I could not say whether this was due to being consumed by anger or fear. His conduct was characterised by further aggression when he suggested that I should “step outside” to continue our conversation.”

Nigel, who had said nothing and was not involved in raising the Point of Order, gives his observations below:

“Mr STRANGEWAY addressed the Mayor, pointing out that the Mayor needed to reinstate the meeting which, at that point, he had not done. The Mayor then turned to SBCs Chief Executive, Mr Mike GREENE, and said something off-mic.

I cannot confirm whether the Mayor later reinstated the meeting or not, because my attention was diverted by the arrival of two uniformed security guards in the gallery, who told us to leave. When asked why, we were told we were disturbing the meeting.

Mr STRANGEWAY pointed out that there was no meeting in progress, because the Mayor had neglected to reinstate it.

I pointed out that I had not spoken and could not therefore have disturbed the meeting and that we were entitled to attend the meeting, should it lawfully resume, under the Public Meetings (Attendance of the Public) Act 1960 and the Local Government Act 1972.

We were certainly not creating a disturbance.

At this point, the ‘lead’ security guard became agitated, going white in the face, shaking and making stabbing gestures with his forefinger. My impression was that he was struggling to maintain self-control in the face of having his ‘authority’ questioned. It was most unprofessional.

I politely informed them that we would not be leaving and invited them to call the Police if they believed we were committing an offence – otherwise, to leave us in peace. They then left. They did not return.

Mr STRANGEWAY and I stayed until the conclusion of the meeting.

Clearly, politely raising a Point of Order is not disruptive, or “disturbing”, or grounds for being ejected by security from a public Council meeting and no security guard would have tried to do this on his own initiative. The video of the meeting shows (at 25:00 minutes) that it was not disrupted and that Councillor Broadbent did not re-instate the meeting, although he should have done.

Reading between the lines, it appears to me that the Mayor, Councillor Broadbent, told Mr Greene that he wanted Nigel and Andy excluded from the meeting. Instead of telling him “You can’t do that”, which was his duty, I suspect Mr Greene simply said “Yes, Sir! No, Sir! Three Bags Full, Sir!” and told the security guards – who are employed by SBC – to remove them on the concocted, ridiculous falsehood that they were “disturbing” the meeting. 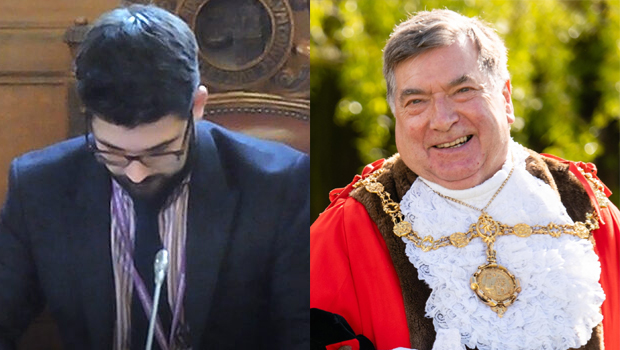 Deployed security guards against an OAP who had done nothing, to evict him from a public meeting in order to evade lawful scrutiny by the media.

Said security heavies then tried to intimidate Andy and Nigel into leaving; but fortunately they stood their ground. The security guards, knowing they were in the wrong, that there was no disruption and they had no power to evict Andy and Nigel, and having failed to intimidate them, then walked off with their tails between their legs.

Given that deploying security guards to remove someone from a meeting clearly implies a potential for the use of force, I think Andy and Nigel behaved with considerable courage and coolness in the face of this type of politically-motivated intimidation. By standing fast and refusing to be intimidated, they scored a victory for common sense, freedom of speech and the rights of the common man.

Mayor Broadbent and Mr Greene should never have used SBC security guards against two people – who were after all exercising their democratic right to listen to Council proceedings – simply because one of them had raised a helpful and perfectly reasonable Point of Order on an important procedural issue.

Given that Nigel had not said anything, he appears to have been deliberately targeted by Councillor Broadbent and Mr Greene for being a NYE journalist. I feel I should point out that Nigel is almost seventy-five and in ill-health while recovering from long COVID. I consider that lying to two heavies to get them to confront Nigel and Andy, with the inherent threat of violence contained in the remarks to “come outside”, was despicable. This type of bullying, harassment and intimidation of community journalists is unacceptable in a democratic society.

The incident was reminiscent of the incident when Labour Party stewards used force against an elderly man who had heckled Tony Blair at the 2005 Labour Party Conference. This was caught on TV and caused shock and outrage nationally. (See lead illustration). It resulted in the Labour Party issuing a public apology. Video here. The stewards were sacked.

Needless to say, neither Nigel nor Andy has received an apology from either SBC, Mayor Broadbent, Mr Greene, either of the two “heavies” or their employer for the way they were treated.

Mr Greene and Mayor Broadbent have been contacted for a comment and to provide the contact details for the security firm they used to try and eject Nigel and Andy. The only response I got was an automatically generated email from SBC stating:

“If you have previously been informed that you have been declared a ‘unreasonably persistent complainant’ by the Council, in line with our policy, your email has been redirected to a single point of contact and will be dealt with as appropriate. Further emails from you will continue to be directed to a single point of contact until you are informed otherwise.

More information about the policy can be found online at: https://democracy.scarborough.gov.uk/ecSDDisplay.aspx?NAME=Unreasonably%20Persistent%20and%20Persistent%20Complaints&ID=2548&RPID=10650161

If you have not been designated under the Policy, your email will be forwarded to the correct recipient. Please do not reply to this email address or use it in the future.”

When I clicked on the link to read the policy it said:

“You are not allowed to view this information”

The incident reflects poorly on SBC and on the security guards. In my view, it warrants further comment and an apology. However, Mr Greene and Mayor Broadbent appear to be hiding behind its “unreasonably persistent complainant policy” to evade giving an explanation, or being held accountable by the media, for their actions. Essentially, this is what proscribing journalists under this policy is really intended to do – thus demonstrating that it is contrary to the public interest.

This is part of a wider malaise within SBC of relentless media suppression. SBC Officers do not recognise the right of community journalists to cover local news and criticise the Council. Over the years, NYE journalists have received threats of legal action, been proscribed on a pretext and been falsely accused of criminal offences.

The level of intimidation has inceased under Councillor Siddon’s Labour-led coalition. Now a Labour Councillor has ignored Labour Party policy and tried to use security guards paid for by the ratepayer to have NYE journalists excluded from a public meeting. SBC is currently refusing to publish the policy it uses to justify proscribing NYE journalists. It is unclear if this policy authorises the use of security to remove them from Council premises.

Mayor Broadbent and Mr Greene should be thoroughly ashamed of themselves for launching a targetted act of bullying on an OAP in this way. Should they wish to contact the NYE, any comment they wish to make will be published.

Predictably, Nigel is not deterred. He is determined to carry on reporting SBC meetings impartially for the NYE, in accordance with his duty as a community journalist.