On 7th May 2019, following the local elections held on 2nd May, Scarborough Borough Council elected Councillor Steve SIDDON [Lab.] to be the new Leader. Readers may recall that the vote was uncontested; the only other Nominee (Councillor Derek BASTIMAN [Con.]) having withdrawn his Nomination, in recognition of the fact that, with only 16 Conservative seats on the new Council, victory was unlikely. Thus was Councillor SIDDONS’ ‘victory’ achieved with only 33 out of a possible 46 votes in favour, notwithstanding the support of Councillor BASTIMAN and his Conservative members (16 in all).

13 members voted to re-open Nominations. In the light of subsequent events, one can only speculate as to whether or not, with the benefit of hindsight, another 11 may wish to have done the same; 24 votes would have consigned Councillor SIDDONS to the boonies.

Interestingly, the Minutes of the meeting do not exhaustively record the Leader’s stated future intentions (as is so often the case), so readers may wish to remind themselves of the full content of the Leader’s acceptance speech:

(I hope you are watching this, Steve? It doesn’t speak volumes; it screams entire libraries)

On 12th May 2019, I commented to Councillor Tony RANDERSON [Lab.] (who, hitherto, had been Councillor SIDDONS’ right-hand man) that a hodge-podge minority administration was a disappointing outcome, since it may not be able successfully to implement the Leader’s intentions (some of which may yet condemn him to being accused of jumping the gun), leaving the whole Borough in the doldrums. 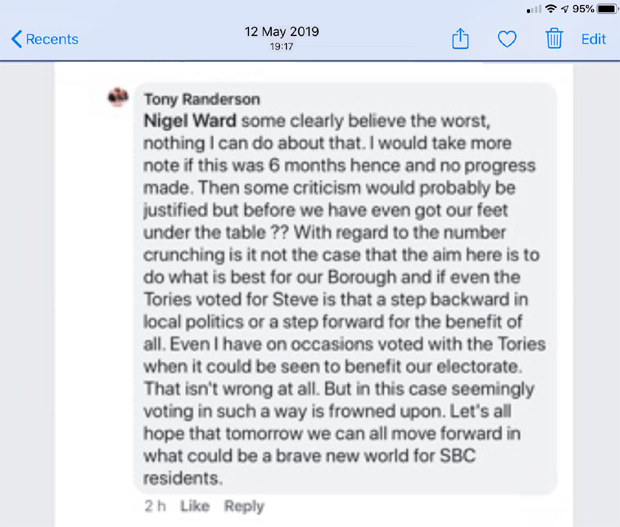 A ‘brave new world’, eh? It has been more like ‘animal farm’. Some animals are more equal than others . . . 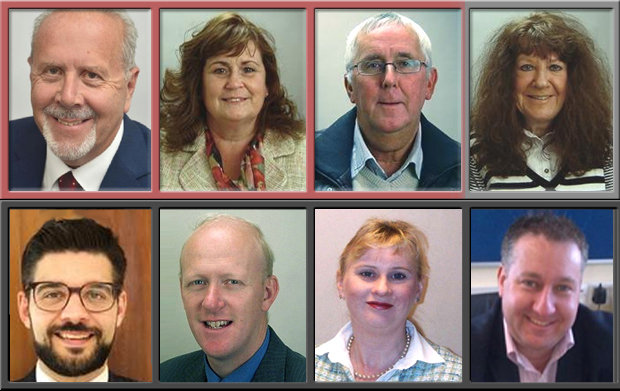 What a recipe for dog-wagging.

The Leader, Councillor Siddons stated that his Cabinet would comprise Councillors Colling and Randerson from the Labour Group and Councillor Jefferson from the Independent Group. He reiterated that the Executive would be supported by a committee system which would give the opportunity for every councillor to get involved  and fully represent their constituents in the work of the Cabinet. He added that the new Council would be about getting things done efficiently, and demanded work and commitment from every councillor. He also wished to ensure that councillors’ travel expenses would be reasonable and proportionate to their job. Councillor Chatt then addressed the meeting questioning the efficacy of the proposed committee system when it had no powers, and raising concerns how the Council would continue to meet its savings targets (some £1.25m a year) without diminishing its services. He noted too that it was right to reimburse councillors from more remote rural areas for their travel expenses to attend meetings.  He however wished the Leader well in his enterprise.  Councillor Cross commented how the election result had demonstrated that people wished for a strong independent voice on the Council, and he and his group would work with the new Leader and with the other political groups for the betterment of the Borough. In reply to Councillor Chatt, the Leader clarified his proposals in respect of expenses inasmuch as he wished to ensure that expenses incurred were for business which directly related to that of the Council.  Further, his proposed committees would have a significant part to play in the work of the Executive.

Readers may recall that I covered all this and other aspects of the new administration in my article “Lord of the Flies”, in which I dealt with, in particular, the Leader’s declared intentions:

Since then, a period of over nineteen months has elapsed – not the six months for which Councillor RANDERSON had pleaded (“Then some criticism would probably be justified…”, as Councillor RANDERSON put it, in his Facebook comment to me) so he must now take my criticism on the chin – and it is now proper and appropriate to examine how the SIDDONS administration has performed, as compared to the program set out by the new Leader,  set out both above and when the Council met on 13th May 2019 (when the Leader announced his Cabinet-Lite).

How have these intentions played out?

The following inventory shows that not one of Councillor SIDDONS’ pledges has come to pass:

It is no exaggeration to state that ALL of these outcomes were predictable and predicted – and not only by me in my “Lord of the Flies” article, but by several observers, including ‘old hand’ Councillors and former-Councillors who have supported the Enquirer for years (as did Councillor RANDERSON, before his elevation to ‘high office’.

No doubt Councillor SIDDONS (and probably Councillor RANDERSON) will seek to excuse this litany of dismal failures by blaming it all on the COVID-19 pandemic. However, they were all heading down the pan long before the lockdown and its concomitant ‘economic down-turn’.

And there have been other catastrophic failures that Councillor Steve ‘Openness & Transparency’ SIDDONS has done his best to keep to himself until the last possible moment:

Before concluding this article, I asked a couple of the ‘old hands’ what failures and/or omissions characterised the SIDDONS administration from their perspective. Here are some of their ‘lowlights’:

Hypocrisy. In opposition, the present leader demanded that the DBID come back to Council. Never happened. His deputy said, “There’s been a vote. You lost. Get over it”. In opposition, Randerson described the OAT as a white elephant. In office, it suddenly became “fantastic”. Siddons claimed a big success with Selective Licensing of private landlords as part of his Building a Better Borough blarney. Actually, it was Billy Chatt who brought it in under the Tories. There’s been one hypocrisy after another.

The biggest issue for me is the broken promise of Openness and Transparency. The reality? Secrecy and lies. Why no public statement on why the Shell UK deal has been called off? Still no women’s refuge. Still no apology for Jaconelli. Scant progress on social housing. No tourism support (abdicated to that awful BID company). The town square offer is embarrassing. The whole Siddons program has been Scarborough-centric – god knows what Whitby and Filey must think. And Siddons has treated James Corrigan disgracefully. But that’s what happens when you start asking the right questions.

Readers need not take my word for it that this administration is all at sea; try watching the next Cabinet meeting (via Zoom, on the Council’s Youtube channel) at 10:00a.m. on Tuesday 15th December 2020 . Perhaps the most astonishing aspect of this Cabinet is that the Independent Group continues to prop it up; they must be cringing.

A very wise old parliamentarian once told me that Jimmy CARTER was by far the best ever President of the United States. He justified this opinion by stating that CARTER had done nothing – and thereby done nothing wrong.

Councillor SIDDONS’ legacy cannot even begin to compete with that. He promised to include everyone and do everything – and has excluded everyone done nothing right.

Of course, that is just my opinion. I hope this article (and its URL-links, which I urge readers to follow) demonstrate how I arrived at that opinion; what a shabby administration this has been.

Now we have COVID-19. We have DEVO. We have BREXIT. This is no time to be reliant on the clueless and the inept – a dog all too readily wagged by the tail. 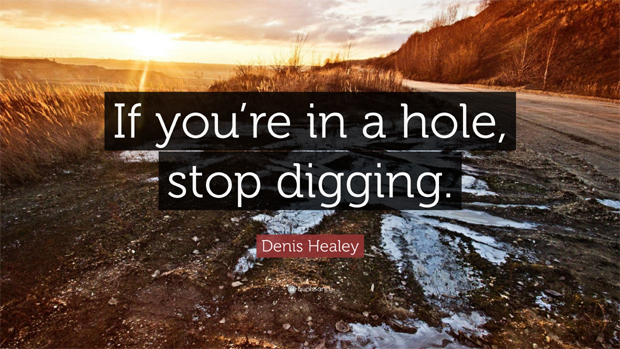