Regular Guest Author NORMAN MURPHY – soon to be appointed an Alderman of the Borough of Scarborough – spells out his views on the performance of the Council’s Commercial Property Investment Strategy.

As those of you who have been following the £22 million ARGOS re-development fiasco will have noted the project has, thus far at least, been driven forward by Scarborough Council’s Regeneration Director, Richard (the Brighton Bin Man) Bradley.

It will be recalled that BIN MAN Bradley, who, in his previous appointment at Brighton & Hove Council, was responsible for waste management, has no background in regeneration. Nonetheless, on his arrival at Scarborough, his first recommendation with regard to his new job of “regeneration”, was that the Council should purchase the clapped out St Nicholas Hotel for £14 million. It is, perhaps, worth noting here that the previous year the knackered hulk had been valued at about half this cost.

Anyway, be that as it may, the BIN MAN was next given the task of pushing through the ludicrous ARGOS development by leader of the Council; comrade SIDDONS.

Now initially, even though the whole concept of giving Coventry University £22 million of rate-payers’ money to build a block of flats is, to any sane individual, a completely bonkers proposition, the BIN MAN, through a masterful use of misinformation and fake promises, managed, incredibly, to get Full Council to agree the deal.

However, that was 2019 and a lot has happened since the ARGOS scheme was first approved. Now the wheels on the BIN MAN’s waggon look as though they might be about to drop off.

Perhaps, unsurprisingly, since 2019, both the residents of the Old Town of Scarborough, and the wider rate-paying population of the Borough – and it should be added elected members from all parts of the political spectrum – have progressively started to see the ARGOS development for what it really is: a complete RIP OFF.

Now normally this growing realisation that the ARGOS project is nothing short of total financial madness would not have bothered leader SIDDONS. He is, it seems, obsessed with building social housing and no doubt sees the ARGOS development as a way of getting a 210 unit HMO built without being troubled by the inevitable opposition such developments usually attract.

Accepting the leader’s total lack of any regard for the views and concerns of the old town residents, he would almost certainly have told the BIN MAN to push on.

However, recent developments indicate that the leader’s dreams of pushing through the ARGOS development may be about to be shattered.

The ARGOS project, as most rational people could have told leader SIDDONS ages ago, was quickly recognised as a financial car crash; and the rate-payers have on many occasions told the leader that they do not want £22 million of borrowing adding to their account.

Moreover, and in addition to their financial concerns, residents are also saying, now that the top secret plans have finally been revealed and rate-payers can see what the leader intends to spend their £22 million on, that they do not want the ugly monstrosity of a building.

For example Mr Perry, on behalf of the Civic Society, told the Council recently:

“As far as the appearance of the building is concerned the Scarborough Renaissance Charter agreed to ‘reject the mediocre’. “The proposed slab is uniform, bland and resembles a utilitarian barracks rather than a welcoming residential building. “We should revive the spirit of renaissance and lift our sights higher to ensure a development which will inspire pride in our town. “This proposal would replace one over-sized eyesore with another, even larger.”

“the proposed building is too dominant and inappropriate for its setting. The proposed building is much taller than the existing building and would miss the opportunity to open up views of [Scarborough] Castle.” Mr Perry adds that the building is “hardly sympathetic” to its historic surrounding area and questions whether students should be housed in a “prime town centre site”.

So comrade SIDDONS must have thought: What do I do now? Not only are the residents being impudent enough to question my borrowing £22 Million, they now don’t like what I am proposing to spend their money on: Ungrateful wretches.

So what to do next? Well there is always a fall back plan in the Clown Hall and, as might be expected from the current leadership, a fall guy if that is needed.

Step forward to the rescue Mr Mike Greene, Chief Executive of Scarborough Borough Council who, helpfully for leader SIDDONS, was quick to find that fall back plan.

Big chief Mike, writing to members of the council, in a secret note, which of course he must have known would be promptly leaked to the media, told members that he suddenly wanted to update them:

“on some temporary operational changes I am making. You will know that in line with the strong recommendations from the peer review, my own reflections on structures and organisational capacity and discussions across the organisation I have been working on a senior management review which I will be bringing forward in early January”.

As far as I know, no members knew that there had been, “strong recommendations from the peer review”, but, heigh-ho, who cares? This now gives big chief Mike the excuse to give someone in the top tier of management the boot; but who?

Well it did not take big chief Mike long to get to the name of the victim.

“In order for things to work effectively it is necessary for me to tweak the reporting lines of some Services temporarily and move them under the Regeneration Programme Lead; including the Regeneration Service, which currently reports to Richard Bradley and the Project support Service which currently reports to Nick Edwards. Nick and Richard will continue to focus on other areas within their wide portfolio”.

In the BIN MAN’s place will be Marc Cole who, big chief Mike says:

“will be joining us on an interim basis and brings a wealth of experience delivering key regeneration schemes from around the country”.

(Unlike the BIN MAN, who just brings waste).

Methinks that the “other areas” that Richard (the Brighton Bin Man) Bradley will now be focusing on will not be the ARGOS project but more likely a novel waste disposal project: watching his own career at SBC going down the pan.

Nor, I suspect, will the BIN MAN be alone in seeing his career going down the pan. With his catalogue of gaffes getting ever longer, comrade SIDDONS must realise that he is also in imminent danger of being flushed away.

I suspect that brining in a new regeneration officer, in a last desperate attempt to save his sinking ship ARGOS, will be an abject failure. The arrival of Marc Cole has the look of a captain rearranging the deckchairs on the TITANIC, in the hope that it will save the doomed liner: it won’t.

The long list of failures comrade SIDDONS has racked up since his inauguration in 2019 will, I feel, very shortly send him to Davy Jones locker. His secretive and underhand negotiations with FLAMINGOLAND over the Futurist site and their plans to build flats on the site has not gone unnoticed. His failure to reclaim the sites in the North Bay which BENCHMARK currently hold is a testament to his dithering style of leadership.

However, it is comrade SIDDONS complete disregard for the wishes of the residents of the Borough which I feel will ultimately sink his premiership. The current leadership, just like their predecessors, I have to say, does not seem to understand that they were voted into office to bring in real and meaningful change to how we are governed: not to play fast and loose with the rate payers money.

Ignoring the wishes of residents, ridiculing their legitimate concerns, as with his determination to press on with the madness of the ARGOS development, and turning a deaf ear to their overwhelming rejection of this project, have all the characteristics of how the previous administration treated residents over the FUTURIST demolition.

Also, just as his predecessors did with the FUTURIST site, he may think that producing an artist’s impression promising a wonderful Town Square next to the ARGOS development will bribe residents into backing his mad cap scheme: but he will be wrong. In my view the rate payers of the Borough of Scarborough have had enough of paying for Council failures.

As I see it, unless there is a radical change of course, which on past and present form looks highly unlikely, the same iceberg which sank the previous administration awaits SIDDONS “ship of fools”.

[Norman’s next contribution will address the recently announced SBC Planning Application 20/02437/FL for a long-promised but insultingly small Market Square (already slammed by Historic England), to be crammed between the historic Market Hall and the intended monstrosity on the site of the former ARGOS building, dubbed ‘SIDDONS’ FOLLY’): 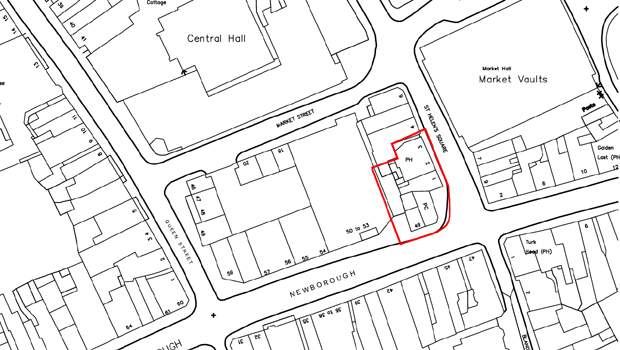