I hope that regular readers will join me in extending a warm welcome to Marc COLE, SBC’s new Regeneration Programme Lead.

Marc (57) has established something of a reputation for himself in the field of what Councils like ours choose to present as Regeneration. Sources report that SBC is Marc’s intended last stop on the route of his career before retiring to a charming spread on the fringes of the North York Moors. And who can blame them? Or him?

Regeneration (SBC-style), remember, is name given to the benevolent spin the Council tries to attribute to such brilliant interventions as the demolition of the Futurist Theatre, the acquisition of the St Nicholas Hotel (a.k.a. Travelodge), the incomprehensible ARGOS project and the Scarborough Harbour ‘Masterplan’).

On his LinkedIn profile, Marc describes himself thus:

“Marc is an experienced regeneration and development professional with a proven track record of delivering transformation change and strategic problem solving.”

Having, in recent years,  single-footedly kick-started the Regeneration juggernaut in Aberdeen and Calderdale, Marc appears to have been head-hunted as ‘trouble-shooter’ to drive SBC Leader Councillor Steve SIDDONS’ much-vaunted Officer-driven  (but flagging) ‘flagship’  ARGOS project over the finish line.

Apropos the above, allow me to present a foreshortened reproduction of SBC Chief Exec Mike GREENE’s email to all Councillors of Thursday 26th November 2020 (I have omitted the larger part of the email as it concerns itself only with an update on the COVID-19 regulations not in the least germane to the present context):

On other matters I wanted to update you on some temporary operational changes I am making. You will know that in line with the strong recommendations from the peer review, my own reflections on structures and organisational capacity and discussions across the organisation I have been working on a senior management review which I will be bringing forward in early January. However due to the volume of important work we have on (in terms of regeneration opportunities) and the wide range of expanding priorities and external funding opportunities available I am bringing in some temporary interim resource (Regeneration Programme Lead) reporting directly in to me. This will provide some extra capacity whilst I implement the senior management review and enable the Council to capitalise on its current high priority initiatives (e.g. Towns Funds projects, masterplan development projects etc.)

Marc Cole will be joining us on an interim basis and brings a wealth of experience delivering key regeneration schemes from around the country. In order for things to work effectively it is necessary for me to tweak the reporting lines of some Services temporarily and move them under the Regeneration Programme Lead; including the Regeneration Service, which currently reports to Richard Bradley and the Project support Service which currently reports to Nick Edwards. Nick and Richard will continue to focus on other areas within their wide portfolio. A key task for Marc will be to review the current capacity we have to deliver on the regeneration and funding opportunities we have available. If you have any questions about this update, please get in touch.

I would like to pick up on a few of Mike’s points and offer, as subtext, an opinion on their real meaning: 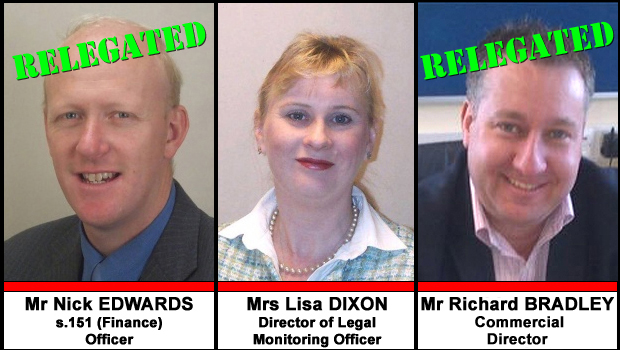 All this leads me to speculate that Richard BRADLEY may soon be leaving the Council – quietly and with little or no pomp ort ceremony. My guess would be in February. It would be reasonable to anticipate a period of ‘overlap’ during which Richard could bring Marc into the narrative.

But the bottom line, I suspect, is that the Binman, having been relegated (i.e. stripped of command of the Regeneration Regiment, along with Mr EDWARDS) is soon to be binned himself. He will no doubt in due course be regenerated elsewhere.

The task facing Marc COLE is daunting. Already, the ARGOS project is looking like being at least four months behind schedule. At the meeting of Cabinet on 16th June 2020, ‘Deputy’ Leader Councillor Liz COLLING [Lab.] spoke of Planning consent being in place by the end of September. (in fact, the Planning Committee met in Septemebr – but not to consider the AGORS Application.

NYCC’s Temporary TRO was posted in the neighbourhood in good time for that – evidently, demolition was fullyintended/expected to be underway from 21st September 2020.

But September came and went and the ARGOS Application has since been deferred at least until 21st January 2021, and Town Hall insiders predict that that date, too, will go begging.

Incidentally, those who take an interest in such recondite concepts as Regeneration may recall the oh-so-precious Conservation Zone. They  may be intrigued to see that the Futurist and the ARGOS building have something in common.

When the Local Plan was reviewed in 2015, certain changes were made to the boundary of the Conservation Zone (within which, architectural and cultural amenities are intended to be preserved). Those changes included moving the boundary in such a way as to leave both the Futurist and the ARGOS building outside of the Conservation Zone – and thus susceptible to demolition.

Examining the animated GIF below (for at least 10 seconds), it is easy to guess what comes next for the wrecking-ball.

The conclusion I draw from this is that the ARGOS demolition is just another step in a long-planned mission. We know, after all, that Councils take the l-o-n-g view. So it makes little difference whether the current administration is Red or Blue – so long as the Officers’ plans are fulfilled.

What does the tail do?