Following on from the death of “Yorkshire Ripper” Peter Sutcliffe, in a ground-breaking series of articles, CHRIS CLARK & TIM HICKS now cover his attacks in London and the surrounding area.

Until now, the conventional wisdom was that all of Sutcliffe’s attacks were launched from his car. Chris Clark however was convinced that this was not so. Witness evidence received in the murder of “Hope” in the “Nude in the Nettles” murder in North Yorkshire, the abduction of two girls by Sutcliffe from London in 1977 or 1978 and the attempted abduction of a schoolgirl in Leicester in 1980 has confirmed that Sutcliffe used his lorry to attack women, not just his car.

The murders the authors believe were committed while Sutcliffe was driving his lorry are covered in the following articles:

In the London articles in the Lorry Murders series, the authors give the background and more information on the eleven murders, (Jacqueline Ansell-Lamb, Barbara Mayo, Gloria Booth, Eve Stratford, Lynne Weedon, Margaret Lightfoot, Elizabeth Parravicini, Lynda Farrow, “Margaret” known as “Bedgebury Forest Woman”, Sally Shepherd and Patricia Morris) one attempted murder (Marie Burke) and two abductions (Child A and Child B) in London the authors believe Sutcliffe should be considered as a suspect for.

The murders of Lucy Tinslop and Judith Roberts, and attempted abduction of Child C have been included because the authors believe they were committed while travelling from London to Bradford.

The murder of Wendy Sewell in Bakewell in 1973 has been included because it has been linked to the murders of Jacqueline Ansell-Lamb and Barbara Mayo.

One murder in Essex (Kay O’Connor in Colchester in 1974) and the murder of an unidentified woman in Norfolk known as “Cockley Cley Woman” are included because the authors believe Sutcliffe committed them while staying with his sister in Duxford. In accordance with their custom when dealing with unidentified victims, the authors have assigned “Cockley Cley Woman” the name ‘Jane‘.

Two other murders have been included because the authors believe Sutcliffe committed them while driving to and from his home in Bradford to Duxford or London. These are Rosina Hilliard in Leicester in1974 and Carolyn Allen in Nottingham in 1974. The murder of Alison Morris in September 1979 at Ramsey in Essex has been included for completeness because of its proximity to Duxford and London.

Attacks the authors believe were conducted using a car are also included in these articles to give a comprehensive picture of the Ripper’s offending in London. For this reason the last articles in the series are called The Ripper’s London Attacks.

Sutcliffe always had an interest in vehicles and started driving early. In 1963 aged fourteen he was charged with driving whilst only having a provisional licence. As an adult he occasionally worked in a garage as a mechanic, changed cars frequently and -according to his workmates- often fitted his cars with false number plates.

Sutcliffe was made redundant in 1975 and used the redundancy money to finance HGV driver training around Harrogate, Keighley and the nearby village of Silsden. All of which the authors believe were to be the scene of Ripper attacks.

Sutcliffe got his HGV licence on the 4th of June 1975. Sutcliffe then started employment as a lorry driver on the 29th of September of 1975 working first for the Common Road Tyre Company, at Okenshaw, then for T & WH Clark in Bradford, in September 1976 until his arrest in 1981.

The authors have established, through eyewitnesses, that Sutcliffe used his lorry to attack women. It was a perfect cover. He was alone, unsupervised; his driving took him all over the country giving him the opportunity to pick up hitch-hikers. The sleeping area in the back of the cab meant he could stay out overnight in lorry parks and he could also entice women into his cab to have sex. They believe these advantages featured heavily in his decision to become an HGV driver.

Peter Sutcliffe did not just confine his travels to West Yorkshire and the surrounding area. He enjoyed driving. Sutcliffe would regularly collect his brother Mick in the lorry and they would go off for two or three days at a time whilst Sutcliffe was delivering and collecting for his firm.

Peter Sutcliffe would regularly be away from home 3 nights a week and return during the afternoon of the fourth day. As an example, Sutcliffe’s mother died of heart disease on 8th November 1978, at the age of 59 years. The following day, Sutcliffe went in his lorry on an overnight run with his youngest brother, Carl. On the return journey, they visited their sister Anne in Morecombe.

Sutcliffe lived in London for some time and had many reasons to visit there in the period 1967 to the time of his arrest in 1981.

Sutcliffe spent long periods in London and travelling to and from London. He was alone for most of these journeys. There were no tachographs at this time and his record of hours driving would have been handwritten by Sutcliffe. It is therefore clear that he had the opportunity to visit London on his own and cruise around, and there is no way of knowing where he was or what he was doing.

Sutcliffe enjoyed using prostitutes. After he had finished visiting Sonia and Marianne, he could move around in London on his own and pick up prostitutes at Soho, Shepherds Market, Commercial Road and/or Spitalfields, before driving home in his car up the M1. When he was in his lorry, Spitalfields is a more likely pick-up point. It was normal for lorries to deliver there, so he did not stick out and it had manoeuvring space.

Sutcliffe’s modus operandi ensured that he always worked from a vehicle and had easy access to an escape route on a fast road, preferably an A-road leading to a motorway.

The authors have utilised some very effective graphic work by Nigel Ward, to correlate attacks they believe were perpetrated by Sutcliffe but never attributed to him, with routes and locations he is known to have frequented. This is the first time geographical analysis of this type has ever been performed on Peter Sutcliffe’s movements.

Sutcliffe’s attacks were previously known to fall into a series of known clusters around red light districts in Leeds, Bradford, Halifax, Manchester and Huddersfield, as shown between the photo-fits in the lead illustration. This new analysis presents a more detailed picture.

Attacks committed prior to the 29th of September of 1975, when he got his first job as a lorry driver, were committed in his car or, on one occasion, in a friend’s car. Thereafter, they were committed using his lorry or his car. The authors believe that he only used his lorry for some routes in the period 1975 to 1980: 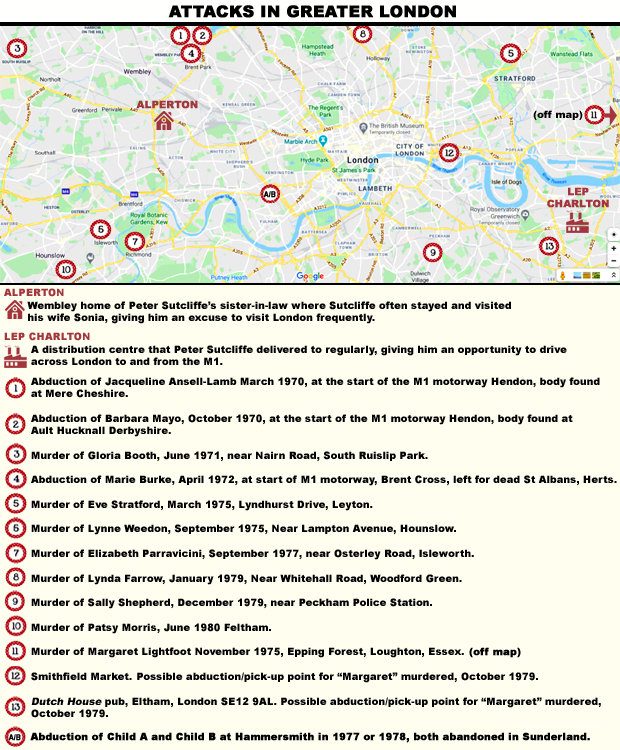 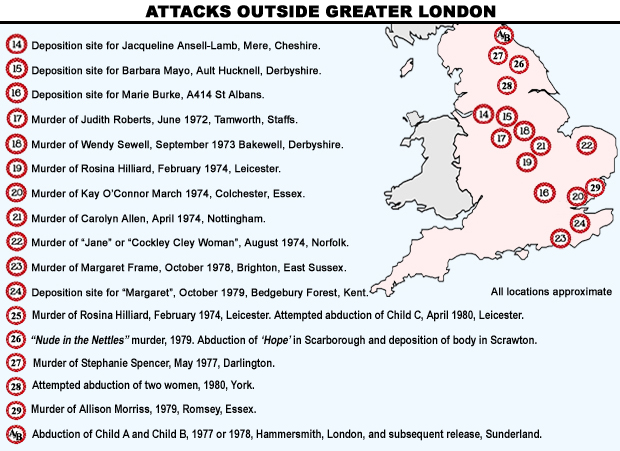 Murders along routes not associated with London

Route 1: Bradford to and from Harwich: Murder of Alison Morris in September 1979 (28) at Ramsey in Essex, probably on the return journey to Bradford using the A120, M111, A14, A1M route to Bradford. It was covered in this NYE article.

Murders along routes between Bradford and Sutcliffe’s sister-in-law Marianne’s house at Alperton (Car and Lorry):

Route 5: Route home to Bradford from Sutcliffe’s sister-in-law Marianne’s house at Alperton using the M1 M62 with a diversion via the A453 and A60 to Bath Street, Nottingham return to the M1 via the A60, A6130 and A610: Murder of Lucy Tinslop August 1969 Nottingham.

Route 11: Route home to Bradford from Sutcliffe’s sister-in-law Marianne’s house at Alperton using the M1 M62 with a diversion via the A563 to Checketts Road returning to the M1 along the A563 and A50: Attempted murder of Child C in April 1980 from Checkett’s Road Leicester (Also 19).

Abductions from London on the route to and from Sunderland Docks

Cluster of murders around the LEP Depot at Charlton

Route 14: Bradford to the LEP Depot at Charlton (Lorry) using the M62, M1, A406 North Circular Road, A10, A2: Abduction of “Margaret” or “Bedgebury Forest woman” in October 1979 (12), or (13), and murder at Bedgebury Forest (24). Chris has established that Sutcliffe delivered in Europe and it is possible that he drove to the continent via Dover. If so, then the deposition site at Bedgebury Forest may be associated with the onward route to Dover using the M2 or M20 via Bedgebury Forest, then on to Dover using the A20. Murder of Sally Shepherd (9) in December 1979 is in this area which Sutcliffe knew very well. Abduction of Child A and Child B from Hammersmith may have been on the return journey to Sunderland from the LEP Depot.

Cluster of murders along the route from Sutcliffe’s sister-in-law Marianne’s house at Alperton to his Sister Maureen’s home in Duxford:

The authors believe that:

The murder of Alison Morris in September 1979 at Ramsay in Essex was probably committed on the return journey to Bradford from Harwich Docks for Sutcliffe’s work and not associated with Duxford or Sutcliffe’s Sister Maureen. It is included for completeness only.

The authors also believe that the following murders were committed while travelling between Bradford and Duxford:

Route 17: Murder of Rosina Hilliard (2) in February 1974 in Leicester just off the A47 using the A47 to crossover between the A1M to the M1 through Leicester to return to Bradford from Duxford.

Route 18: Abduction of Carolyn Allen in April 1974 (3) in Nottinghamshire, body hidden at Old Dalby Wood Leicestershire while using the A 46 and A606 to crossover between the A1M and the M1 to go through Nottingham on the way to or from Duxford to or from Bradford.

It is also possible that the murders of Carolyn Allen, Rosina Hilliard and Wendy Sewell were committed from the M1 or A1(M)/A1 on a journey to or from London, but the authors feel it is more likely they were committed on the journey to and from Duxford.

Structure of the Articles

The Ripper’s London attacks 15: The Eastern route and Weedon Links

(These are grouped because they have been linked by the police)

The vehicles the authors believe the Ripper used are shown in Column F “Vehicle Used” in Table 13, below.