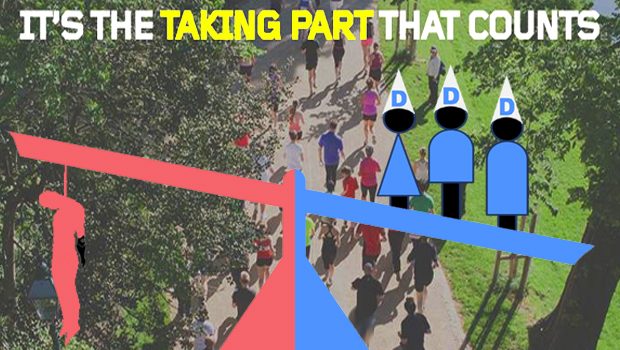 Scarborough Borough Council Leader Councillor Steve SIDDONS [Lab.] has uttered a number of public statements committing his Council to “openness and transparency”. What remains to be seen is whether or not these buzz-word statements amount to more than loose rhetoric. The pressing question is: will they presage real accountability?

Without accountability, claims of “openness and transparency” amount to little more than political shop window-dressing.

In considering this question, I want to examine matters raised in a recent Letter to the Editor of the North Yorks Enquirer from Councillor Michelle DONOHUE-MONCRIEFF [Ind.] concerning the Council’s Forward Plan.

The Forward Plan is a statutorily requisite document setting out, on a rolling quarterly basis, all of the “Key Decisions” which the Council expects to progress in the coming quarter. The definition of a “Key Decision” is clearly set out in National Guidance:

This is reflected in SBC’s documentation, thus:

The regulations firstly require Councillors, press and public to be given 28 days notice in order to be able to research and evaluate any Key Decisions and to prepare any statements of objection or support and, secondly, the Forward Plan containing these Key Decisions (and so-called ‘A’ Items) must be attached to the Agenda for the Cabinet Meeting at which the Forward Plan is intended to be ratified.

As with all Council Agendas, the Cabinet Agenda must be published five clear days  (i.e. working days, excluding Saturdays, Sundays, Christmas Day, Boxing Day and the Bank Holidays) ahead of the day of the scheduled meeting, with the Forward Plan and other required documents “attached herewith”.

Unfortunately, this has not taken place because (I am informed) one of the Portfolio Holders (namely, Councillor Liz COLLING [Lab.], Portfolio Holder for Economy, Communities and Commercial) was unavailable to sign off the documentation due to being away on holiday.

Consequently, the Forward Plan was not “attached herewith” to the Agenda. It finally found its way to Councillors (but not press and public) on the afternoon of Monday 17th June 2019 – less than 20 hours ahead of the Tuesday 18th June 10:00am Cabinet meeting – wildly adrift of statutory requirements – leaving Councillors, press and public with a totally inadequate opportunity to read and digest the Cabinet’s short-term future intentions.

I should clarify that the Forward Plan is not set in stone. Unanticipated problems and/or opportunities do arise; hence, provided always that the legalities are observed, an element of plasticity is both desirable and, in fact, often essential, going forward.

Nevertheless, adherence to the underlying principles of the Forward Plan ensures accountability and provides a framework within which potential legal (and politically motivated) challenges to Council decisions can be mounted, based on the public record of the Council’s actions. This is the reason why adherence to the legal requirements in respect of the statutory 28 days notice, including the publication of the Agenda (complete with its “attached herewith” documentation) five clear days ahead of the meeting, is absolutely vital. Regrettably, the Council has not met these requirements.

The new Council’s first scheduled meeting of Cabinet should have taken place on 13th May 2019, but did not. Not all members were able to attend, due to prior commitments. Consequently, the ratification of the Forward Plan was deferred until the next meeting.

But the Forward Plan is a standing item on the Cabinet Agenda. Surely, now that an additional month of preparation time had elapsed, this really should have sufficed to ensure that the Forward Plan was, at the very least, published with the Agenda – five clear days ahead of the next Cabinet meeting on 18th June 2019? Apparently not.

We may soon find out; five Conservative Councillors (Heather PHILLIPS, Phil TRUMPER, Clive PEARSON, Marion WATSON and Derek BASTIMAN) have signed a ‘call-in’ of the decision to provide some public conveniences on the following grounds: 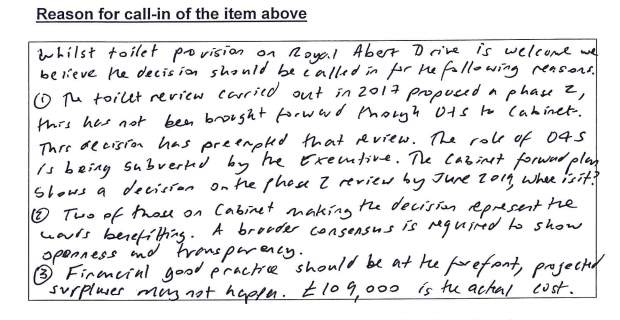 At first glance, it would appear that the projected “actual cost” of £109K for the re-opening of the toilets falls well within the £140K limit (as set out above) – on which point the ‘call-in’ may founder.

On the second criterion, there is room for some argument over whether or not the expenditure of that £109K may “have a significant impact in one or more ward or electoral division”.

Though not cited amongst the reasons for the ‘call-in’, the ‘call-in’ may be bound to succeed on purely technical grounds, irrespective of the merits (and popularity) of the decision – namely, on account of the late service of the Forward Plan.

All this could add up to having the effect of closing the toilets down for a second time (even if the necessary funding could be found by robbing Peter to pay Paul), because the public conveniences decision now appears to have been omitted (or removed?) from next Monday’s Agenda.

Now, the ‘call-in’ must go first to the Overview & Scrutiny Board (OSB), then back to Cabinet, and then (if it is an ‘A’ Item? – which, for the present, remains unclear) back to Full Council – all of which will take time to run its course.

Of course, Cabinet could blatantly disregard the findings and recommendations of the OSB and go ahead with re-opening the public conveniences anyway – but that is one hell of an autocratic way for Councillor SIDDONS to start a four-year term for which cross-party inclusiveness has been promised, along with the ubiquitous “openness and transparency”.

Ergo, it is possible (perhaps unlikely) that there may be no public conveniences throughout the summer holidays. I hope I am mistaken, but it looks to me as though the Leader’s approval-winning decision may have have to face down a Tory attempt to punt it into the long grass. No doubt this will be the first of many technical challenges. But it will be interesting to hear the ‘call-in’ signatories elaborate on any financial objections they may have with regard to re-opening the public conveniences; if memory serves, all five were very free with the £4+M to ‘regenerate’ the Futurist site.

And it should not be over-looked that this is not the first time a statutory deadline has been missed. The meeting of 30th May 2019 (to ratify the appointment of the Mayor, the Deputy Mayor and the Committees memberships and respective Chairs) also took place outside of the legal timescale. When is a Mayor not a Mayor?

In fairness – and I must emphasize this – these failures are not entirely ascribable to the inexperience of the new Leader/Cabinet. The proper governance of the Council falls squarely within the remit of the Council’s Monitoring Officer and Director of Legal & Democratic Services, Mrs Lisa DIXON, whose duty it is to guide them through the legalities. Has she now granted one of her miraculous, albeit undocumented, ‘Special’ Dispensations?

I have expressed elsewhere my view that the new Council should be granted a reasonable period of grace in which to ‘get all its ducks in line’.

But the honeymoon should surely now be over. Eight weeks after the election, the ducks look to be floundering – but it is the Officers who are allowing them to do so. Could it be that the Directorate is not especially enamoured of the new regime? Would the Directorate like to see it fail? Would the Directorate prefer to return to ‘business as usual’ with their Conservative Cabinet members? Granted, it’s the taking part that counts – but Officers are not permitted to take anyone’s part; they have a statutory duty to impartiality.

Meanwhile, I have been in email and/or phone dialogue with three of the four Cabinet members on pressing issues including:

It is interesting to note that these dialogues demonstrate that my private emails to (and from) Councillors are no longer being blocked. What it does not tell us, is whether or not they are still being read by Officers. In my view, that would be taking “openness and transparency” too far . . .

I hope to be able to report that the Cabinet is operating witin the promised land of “openness and transparency” and at least showing some sign of being willing to give due consideration to constructive criticism from, and productive dialogue with, members of the public such as myself. I say “I hope” because present indications are that this new Leader is strong on rhetoric but disappointingly weak on practice.

Wherein lies that weakness? I hope that it is not the case that our new Leader – a former Council Officer himself – is one who believes implicitly that Officers can always be relied upon for their competence and integrity. If he is, I hope he will join me over a coffee and challenge me to produce evidence to the contrary . . . if he really wishes to elevate Scarborough Borough Council to a level that satisfies its citzens, he could do no better than co-opt the assistance of the North Yorks Enquirer.