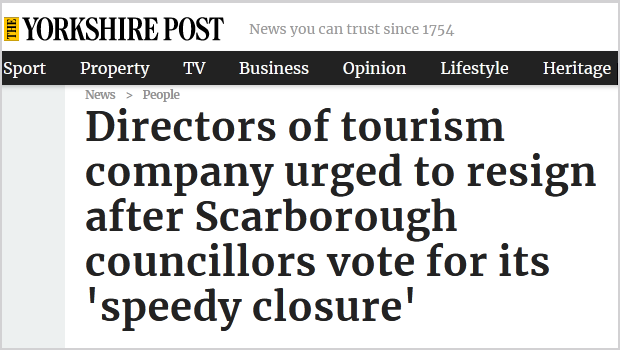 Readers seeking a more orthodox report of today’s events could do far worse than read the following article published in the Yorkshire Post at 6:31pm on Thursday 28th July 2022 under the headline reproduced above:

What the above-mentioned report does not convey is the breath-taking ineptitude of Councillor Eric BROADBENT [Lab.] who, in his third term as Mayor (and Chair of the Council) apparently still cannot grasp the protocol for dealing with Amendments to the substantive Motion which, let us remember, was:

Amonst a number of Aplogies for Absence, that of Councillor Janet JEFFERSON [Ind.] was greeted by a rousing hoot of mirth which must have been audible all the way down Newborough. Also noteworthy was the silence throughout the Meeting of the ‘Leader’, Councillor Steve SIDDONS [Lab.], whose failure to bring the BID debacle to Full Council during the last three years – having previously, in 2019, sought the assurance of the former Leader, Councillor Derek BASTIMAN [Con.], that Council would have the last word. It has had it now, no thanks to SIDDONS.

He was desperate in his rush to turn the floor over to his fellow Labour member (and Chair of the Audit Committee), Councillor Alex BAILEY [Lab.], to introduce an Amendment to the Motion in the following terms: 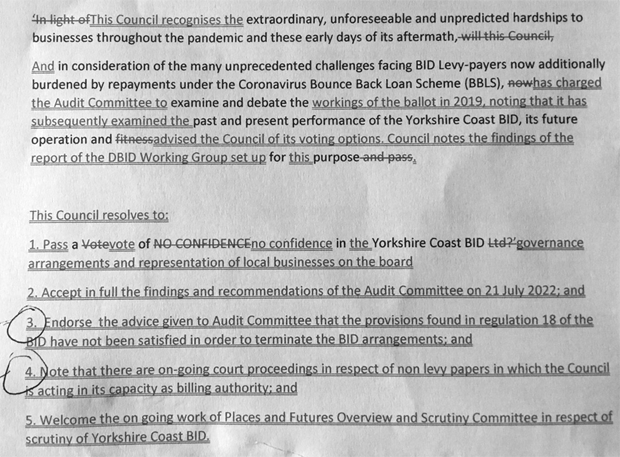 The preliminary paragraph, highlighting the work of his own Audit Committee and its DBID Working Group, actively negates the intent of the original Motion. A Chair with any understanding of the Constitution would be aware that no Amendment may negate the original Motion, but no intervention from the Monitoring Officer was forthcoming – suggesting that Paid Service approved of the attempted negation.

Resolution 1 sought to dilute the NO CONFIDENCE Motion by constraining it to the “governance arrangements and representation of local business”, thus setting up Resolutions 2, 3, 4 & 5, all of which serve only to drive the whole issue back into the long grass of interminable Committee parcel-passing, achieving nothing but evading the issue for who knows how long. Stasis.

Members of the public on the front row of a packed public gallery (overflowing into the corridor which leads to the Chamber) observed, and commented amongst themselves, upon Councillor BAILEY’s nervous delivery and trembling hands. It was apparent to many that a ‘fudge’ was underway – the more so when the Mayor attempted to sideline a second Amendment, Proposed by Councillor John NOCK [Con.] by calling a 10-minute Suspension to allow members to absorb the full verbosity of the BAILEY Amendment.

On resuming the Meeting, the Mayor attempted to by-pass the NOCK Amendment entirely by moving directly to the vote on the BAILEY Amendment (which, had it carried, would have become the new substantive Motion and the administration’s attempted punt into the long grass would have succeeded).

Full credit to Councillor Bill CHATT [C.I.A.], who insisted on his right to present his Motion, against the Mayor’s wishes, and spelt out – to a standing ovation – much of the businesses’ ground for objection.

Only the outcry from the public gallery and Opposition Councillors forced the Mayor to abide by the Constitution and allow Councillor NOCK to present his Amendment.

Councillor NOCK’s Amendment was essentially identical to Councillor CHATT’s original Motion, with the addition of the underlined form of words:

“…pass a Vote of NO CONFIENDCE in Yorkshire Coast BID Ltd) and resolves to work with the BID Company to bring about its speedy closure.“

The Mayor then called a second 10-minute Suspension , during which Legal Officers and prominent Councillors surrounded Councillor NOCK in a frantic huddle, the result of which was the following hybridised Amendment (an attempt to appease all parties by smuggling the self-promoting BAILEY content into the NOCK Amendment) – reproduced below with corrected numbering (in red type): 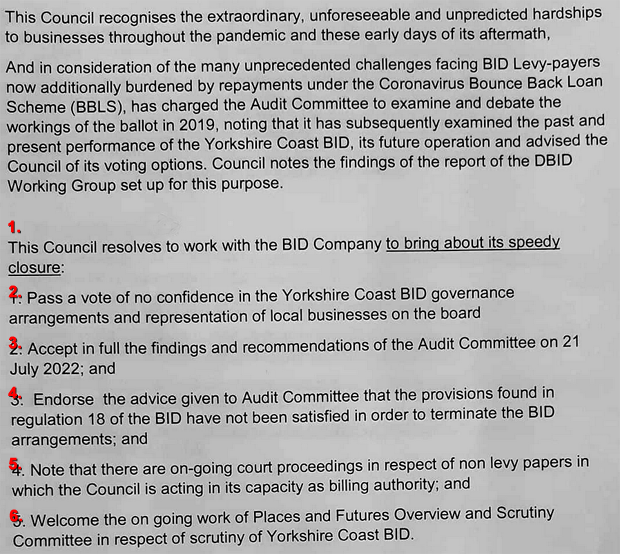 As can be readily discerned, this re-writing of the NOCK Amendment dragged it much of the way back to the blather of the BAILEY Amendment on the tail of the main thrust of his first attempt – the “speedy closure” of the BID Company.

I pause here to give full credit to Councillor Michelle DONOHUE-MONCRIEFF [Ind.], whose summation of the whole sorry saga served to focus attention back on the plight of the businesses – the fundamental purpose of Councillor CHATT’s original Motion and Councillor NOCK’s pro-active Amendment (the residual BAILEY wording being neither here nor there).

Within a matter of moments, the vote was taken and the NOCK Amendment was carried UNANIMOUSLY, thus making it the new substantive Motion.

The obligatory second vote was also carried UNANIMOUSLY – the key message being that Yorkshire Coast BID Ltd is neither needed nor wanted and it is high time for Mr Clive ROWE-EVANS to wind it up, clear his desk and book into a retirement home. Good riddance.

Hoepfully, Officers will expedite the conclusion of this disgraceful departure from democratic process. I shall be watching.

Following the meeting, a party of around sixty walked the two hundred metres to Woodend with a view to asking BID Chair Mr Clive ROWE-EVANS for his resignation.

In the event, it turned out that the BID Office is only a ‘virtual’ office – no physical presence. I asked the building’s manager to email her ‘virtual’ tenant to inform him that the business people were looking forwad to him coming to meet with them face-to-face.

An hour passed, but the elusive Clive did not materialise.