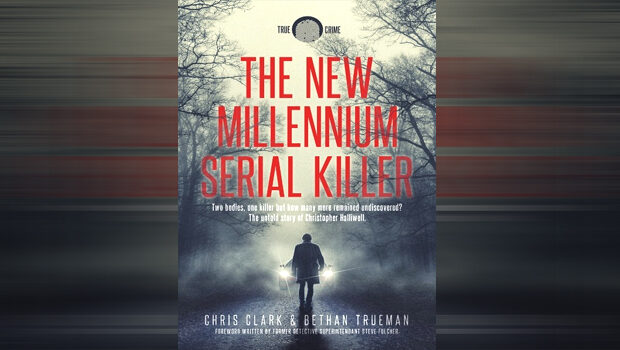 A book review by Evelyn Foley, who is one of the NYE’s readers from the Irish Republic.

“The New Millennium Serial Killer” is an antecedent investigation into potential murders committed by Christopher Halliwell, who is currently serving a full life sentence for the murders of Sian O’Callaghan in 2011 and Becky Godden-Edwards in 2003.

The authors are Chris Clark, a retired police intelligence officer and Bethan Trueman, co-host of the popular true crime podcast Seeing Red. They have conducted extensive research into a number of unsolved murder cases and disappearances, discussing the possibility that they are connected to Christopher Halliwell.

The book starts with a foreword by former Detective Superintendent Steve Fulcher of Wiltshire Police, the detective responsible for arresting Halliwell, thus ensuring the recovery of both Sian and Becky’s bodies.

Halliwell, whose childhood was scarred by emotional and physical abuse at the hands of his mother, grew up hating her and was described by his sister as “a very cold, detached person’ as well as ‘an evil, manipulative bastard’. He developed a love of fishing and of narrowboats and waterways, the relevance of which becomes clear in the examination of the circumstances of the murders discussed in the book. Having served time in prison in the mid 80’s for burglaries, he was released from HMP Dartmoor in 1987. During his time in prison, apparently he asked a cellmate ‘How many do you have to kill to be a serial killer?’

The book contains an excellent chronological profile of Halliwell’s life and twenty nine murders and missing women to which he could potentially be linked. Each chapter describes in detail the circumstances behind the murders and disappearances, including the disappearance of Claudia Lawrence. In all cases, they share a commonality with the known modus operandi of Halliwell. Many of the murdered women’s bodies were dumped in or near water, thus destroying vital evidence. Furthermore, their clothes and belongings were missing; possibly retained by the killer as trophy items.

Following his arrest for the murders of Sian O’Callaghan and Becky Godden Edwards, the police searched a remote pond where Halliwell liked to fish and discovered around 60 items of women’s clothing including Sian’s boots and a cardigan belonging to Becky. The authors suggest that the police forces in the relevant districts should review the items of clothing to see if there are potential matches to the victims of the unsolved murders. In addition, Halliwell made a number of sketches of areas that the authors believe could be burial grounds. The sketches are in the hands of the police who have not released them.

The authors also link Halliwell to a number of abduction and rapes carried out in Somerset between 1991 and 1997 by “The Bath Rapist”. However, I felt they did not prove their case, failing to provide an explanation of why they believed Halliwell would kill in many instances but not in all.

The book is well researched and logically laid out, detailing similarities in each case and comparing them to Halliwell’s modus operandi. A minor quibble is that the conclusions reached at the end of each chapter became a bit repetitive after a while and perhaps would have been better grouped together in a concluding chapter.

Halliwell is a nasty piece of work. Thankfully, he will never be released from prison. One can only hope that if he was involved in these crimes, particularly in the cases of the missing women, he will admit to it so their families can have some resolution.