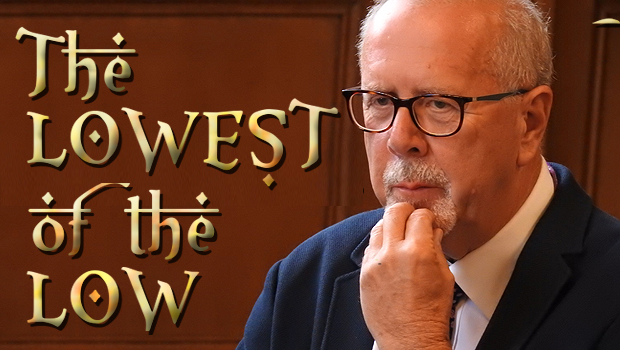 Readers will remember the recent passing of Councillor Hazel LYNSKEY, former Mayor and member, over many years, of various political parties.

Councillor LYNSKEY, at the time of her passing, was listed as one of 4 Unaffiliated members (attached to none of the established political Groups on the Council) – Labour (12 members), Conservative (11), Yorkshire Coast Independent Alliance (5), Cluster of Independent Members (4), and Greens (2).

Readers may (or may not) be aware that any change in the overall political composition of the Council must be reflected in the allocation of seats on the Council’s various Committees.

Consequently, we knew, earlier in the month, that changes would be coming, not only because of Councillor LYNSKEY’s passing, but also following national newspaper coverage of the withdrawal of the Whip from jailed Labour member and eco-loon, Councillor Theresa ‘Gluey’ NORTON, who is now no longer a Labour member (reducing the Labour Group to 11) and is now listed as Unaffiliated (thus restoring that grouping to 4). 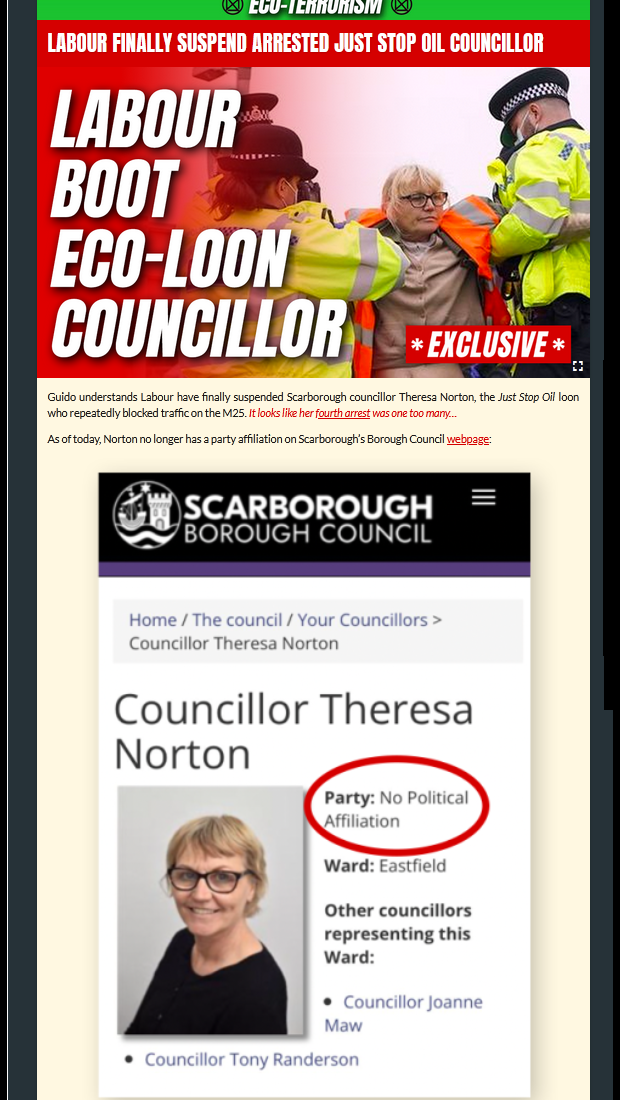 Naturally, this necessitated certain changes in the composition of the Council’s Committees.

Obviously, it would be ludicrous – even by the standards of this dreadful SIDDONS administration – for Councillor ‘Gluey’ NORTON to continue to sit on the Standards Committee, for the obvious reason that any member with such a blatant disregard for the rule of law cannot credibly sit in judgement on other members (not that credibility has ever figured in the SIDDONS administration).

This was soon confirmed in an email from SBC Democratic Services Manager Mr St.John HARRIS, circulated to the Leader and all Group Leaders:

Please note there has been a further change in the political composition of the Council: Cllr Norton is no longer in the Labour group and has become of no political affiliation.

This further change may well affect the political composition of the Council’s committees. If this proves to be the case, then I will be in touch in due course seeking nominations as appropriate with a view to bringing a report to the Council meeting on 16 January 2023.

In due course, this was followed by another email from Mr HARRIS, to the same recipients, on Friday 18th November 2022:

Further to my email dated 10 November, we have now calculated the effect on the political composition of the committees of Cllr Norton’s change in political affiliation.

The revised political composition of the Council is:

I attach a revised membership of Council committees which reflects these changes.

Please may I have your nominations to your vacant seats or any other changes you wish to make by Monday, 19 December.

Cllr Colling – please can you advise which of the Labour group members is to step down from the Standards Committee.

[NB: My clarifications, in red bold]

I see Labour has gifted their former colleague, CLLR NORTON, a seat on P&D!!!!

Consider that for a moment . . . Labour has PROMOTED ‘Gluey’ to the Council’s most important Committee!

SIDDONS, having been effectively forced by his party exceutive to withdraw the Whip from Councillor NORTON, following her numerous arrests (and at least two jail terms), has used the opportunity to bolster his support on the Planning & Development Committee, which now comprises: 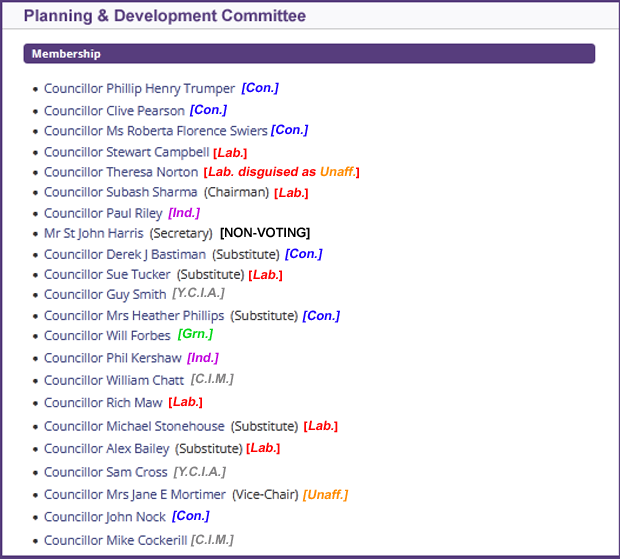 As can be seen, there are 21 members of the Planning & Development Committee (including Substitutes).

However, since Substitutes may only take part in voting in the absence of full members, it is easy to see that the ‘active’ total is only 16 – the political composition of which breaks down thus:

I have divided these into two distinct groupings because Labour (3) can always rely on the support of the Independents (2), the Green (1) and the Unaffiliated (1 + NORTON) = Total: 8

In the event of a tie, the Chair (SHARMA [Lab.]) holds the Casting Vote, thus ensuring a 9:8 victory for SIDDONS.

What is the underlying significance of this?

From SIDDONS’ perspective, Councillor ‘Gluey’ NORTON’s participation is absolutely vital – jailbird or not!

In my view, of all the despicable stunts Councillor Steve SIDDONS has pulled, this is the lowest of the low. In my view, pathetic. Desperate. And more than a little nauseating. A flagrant abuse of the democratic checks and balances necessary to good governance.

He has effectively ‘smuggled’ disgraced eco-loon Councillor Theresa ‘Gluey’ NORTON back into the Labour Party by the back door so as to force through an absurd project that no-one – not the fishermen, not the pleasure boat operators, not the Scarborough Yacht Club, not the seafront traders, not the wider public – that virtually NO-ONE (but SIDDONS) wants. In my view, local politics cannot get any more dishonourable than that.

SIDDONS has survived THREE Votes of No Confidence. Those who would support him for a fourth time – after this most despicable of stunts – are a disgrace to local government and the Borough of Scarborough. They will not be forgiven. 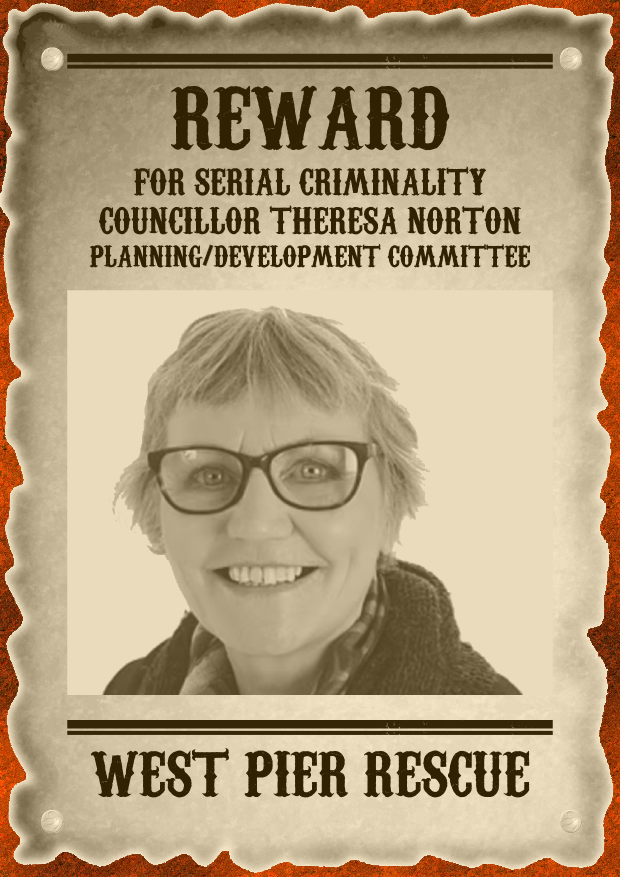