North Yorks Enquirer Harbours correspondent ALLAN ROBERTS has once again excavated some “lessons will be learned’ bullshine from the forgotten annals of SBC Harbours history – 70 years of neglect – forgotten, perhaps, because it presents a crucial impediment to the Leader’s West Pier ‘regeneration’ fantasy.

Scarborough Borough Council, as expected, has nodded through a Proposal based on a Report by the acting CEO, Nick Edwards, to patch up 122 metres of the West Pier to safeguard it for the next 10 years, at a cost of £1.35 million.

The Report, which forms the justification for the Proposal, states, under the heading ‘Health and Safety’:

“A do nothing approach, is not recommended and could lead to structural failure of the pier, therefore failure to undertake the strengthening work will significantly impact the ongoing use of the harbour.”

How disappointing, then, that the Council choose to ‘do nothing’ to the parts of  the Harbour that the Council has long been aware of as being at risk – namely the ‘Bullnose’ of West Pier and the Lighthouse Pier.

The last major work done to the Bullnose was carried out in 1952/53, following its collapse.

Here is a Yorkshire Post report, dated  15th June 1952, which indicates that the collapse was not unexpected and that, just like today, the danger signs were ignored by the authority.

The condition of the Bullnose was described, 6 years ago, in the 2016 West Pier Asset Inspection, as:

Directly opposite the Bullnose, of course, stands the Lighthouse Pier, which is also in poor condition.

I understand that the foundations of  the Lighthouse Pier, too, are not safe, and the Pier is partly fenced-off with safety fencing because of the danger of imminent collapse, and that it may take 3 to 4 years before it will be repaired. 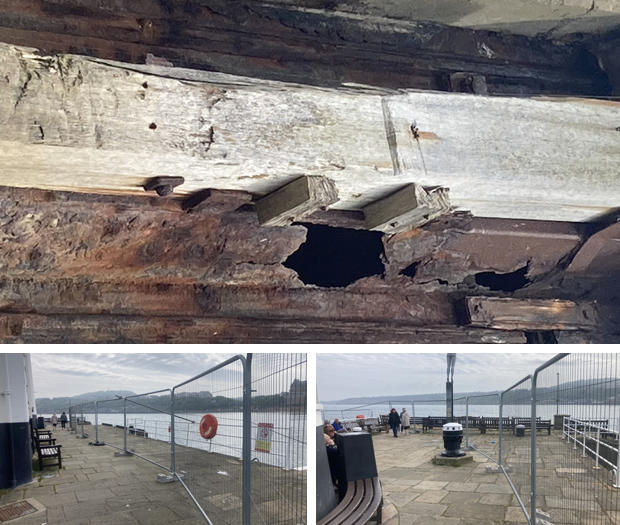 The Bullnose, together with the Lighthouse Pier, form the Harbour mouth, providing the only access to the Harbour, both sides of which are acknowledged by the Council as being in poor repair and in need of attention.

If either the Bullnose or the Lighthouse Pier failed and the Harbour entrance was blocked, then ALL operations at the Harbour would cease immediately.

However, if the portion of West Pier specified in the Proposal failed, then the fishing industry would have a fail-safe reserve option – by using North Wharf as their operational base, and trade could continue.

I suggest safeguarding the Harbour entrance is of more importance, and rates higher in the priority of urgent attention, than does West Pier, and yet it is not mentioned anywhere in the Report supporting the Proposal that was blindly accepted by SBC Cabinet.

To return again to the Report/Proposal:

“A do nothing approach, is not recommended and could lead to structural failure of the pier, therefore failure to undertake the strengthening work will significantly impact the ongoing use of the harbour.”

In that respect, then, the Report is incomplete and inadequate, in that it does not mention – much less prioritise – ALL of the risks to the ongoing use of the Harbour.

It beggars belief that the Council, despite being well aware aware of the potentially disastrous risk to the Harbour and its users, intends to squander £6.4m of taxpayers’ monies, including the whole of the Harbour Reserve Fund, for no other reason than to meet the deadlines of the West Pier Regeneration Plan, when the most important part of the Harbour is in danger of falling down.

My hope is that when NYCC (soon to be NYC) considers this Proposal, they take into consideration the poor state of the Harbour Piers in a holistic manner, rather than the single-minded approach of SBC – and duly reject it.