Resistance to Scarborough Borough Council’s fiercely opposed proposal to access £5 million of Town Deal Fund cash and throw a further £6.4 million of Council reserves to ‘regenerate’ the Scarborough West Pier, in disregard of previous commitments to upgrading the commercial potential for the fishing community and the burgeoning ‘renewables’ industry (whose stock has risen sharply in response to the energy crisis), has been ramped up by two following two Letters urging the ‘powers that be’ to re-examine the veracity of the Business Plan presented by the Council to the Department of Levelling Up, Housing & Communities (DLUHC).

An earlier Open Letter from Mr Senior to Mr Goodwill is available here:

Other relevant press reports are available towards the bottom of this page.

The suspicion arises that SBC, in its Business Plan to the DLUHC, has misrepresented its case by omitting ten years of prior commitment to facilitating onshore and transit services for the ‘renewable (i.e. windfarm) industry and implying that the West Pier is part of Scarborough Town Centre – which, even according to the Council’s own official map, it clearly is not: 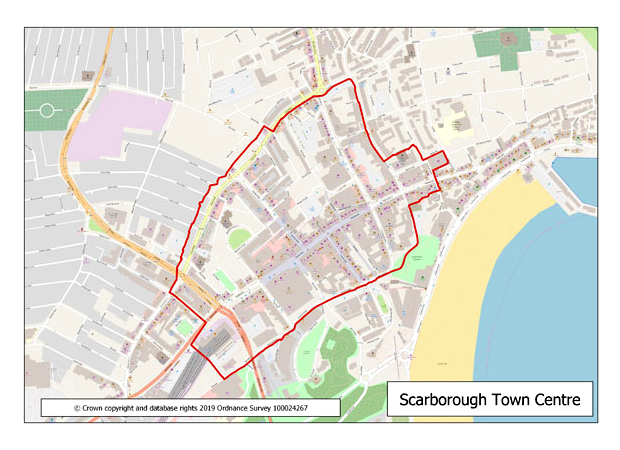 PLUS: Scroll to the bottom to read a very encouraging Report from the Bureau of Investigative Journalism. The parallels are breath-taking.

Dear Sir Robert and All

I am not going to repeat the well rehearsed narratives over consultations etc, but just respectfully ask, if you  are able, to step away from the very emotive arguments for a moment, set aside the politics and personalities involved and read your Development Officers thoughts on the Harbour and supported by Council leaders in 2016.
As far as I can tell the only thing that has changed since this was written is perhaps an even more pressing need to support our developing offshore energy industry and as of recently a growing question mark over the viability of the business case for the West Pier anchor project. I can already hear you screaming self interest and that the maritime aspect will definitely form a phase two…maybe it will and maybe it won’t, however right now and bearing in mind all implications, is it really wise to further compromise the use of what is likely to be much needed industrial real estate at this very critical time?
Please click on the link and read pages 36-39… it’s very insightful.
http://www.windenergynetwork.co.uk/wp-content/uploads/2016/08/WEN_Issue33_WEB.pdf
Finally, since initially writing to you re the West Pier, I have been harangued for being an irresponsible self interested trouble maker who should know better and probably I should, however my military training reminds me of the importance of continually reviewing the situation and not being afraid to check fire and hold if required.
There is no need to respond to this e mail, I would just ask that you read the above article and try to understand why so many sensible folk down here at the harbour feel so frustrated!
Best regards
John S
John W Senior MBE TD
Senior Group,  Sandside, Scarborough, North Yorkshire

So……. In 2015, Scarborough Borough Council was fully aware of the huge potential the renewables industry held for the port of Scarborough.

They even had a representative on a Parliamentary working group in anticipation for the then planned wind farm at Dogger Bank and were applying for funding to support these aims.Then, in 2019, in complete isolation and unbeknownst to any of us, Scarborough Borough Council made a bid for town centre regeneration funds with plans for diversification and changing the primary use of the West Pier into a land-based tourism food court, with absolutely no justification or consultation with key stakeholders or with the community.

This was a most peculiar stealth about-turn, considering their determined intention to diversify into the then emerging renewables industry sector, especially as we are the closest port to the Dogger Bank wind farm, a project whose size and ambition is of a global scale.

So how did we get to where we are now, and who knew what and when?

Obviously, Mr Edwards, as Senior Officer for Harbours, knew all about the potential wind farms already easily within our grasp.

Obviously, renewables and Harbours expert Mr Alex Richards knew, having been included in the government committee.

I would assume our MP knew, and certainly should have known, that a senior Officer at Scarborough Borough Council was representing his constituency at Parliament for this world-saving mega renewables project.

Obviously, the Regeneration Team and Senior Management collectively did not inform the elected Councillors.

Obviously, the MP did not inform his fellow Board members during meetings of Town Deal Board on which he sits. Notably, there is no mention of the renewables potential in any of the minutes of those Board meetings I can uncover.

Most importantly, why did they fail to inform the Department of Levelling Up of Plan A (the renewables option) and how did they successfully convince them to agree to commit funding where it does not qualify and is not required? Did they tell them the funds were absolutely essential to save a Harbour in terminal decline?

Did they tell the Department of Levelling Up that all the stakeholders and the whole community had all been fully consulted and were all 100% behind them?

So… the £14m question (at pre-inflation estimates) is;

Was this collective amnesia a conspiracy by the above mentioned public servants to deceive the Department of Levelling Up, the Councillors, the Town Deal Board and MOST IMPORTANTLY us, as “key stakeholders”?

However, this situation has recently been elevated from a provincial battle of those in positions of power imposing on us what they think is best for us over infrastructure vital to the Green Energy commitments of 2030. I am informed, by well placed and qualified experts, that just off our shores lies substantial reserves of natural gas. Even Liz Truss has told us of her intentions to call upon these reserves in this desperate time of national need.

So here is a BILLION pound question:

Will those mentioned above be able to impose on us their blinkered but determined West Pier plans in preference to keeping granny alive, never mind keeping her warm in the cold winters ahead of us?

Answers on the back of a Russian Ruble banknote.

I close with a thought: why was the £14m funding for the West Pier from the Towns Fund not spent where it is desperately needed and wanted by the whole community?

The money should have gone where the government intended, to revive our struggling town center on what we were all promised, a genuine Market Square on the site of yet another project Scarborough Borough Council committed its self to against the public and communities opinion aided by another invisible U-turn, the now abandoned Argos building!

The ship may, as our MP says, have set sail. Casting off prematurely and certainly not noticing it’s low tide.

The result now is that the ship has run aground on the Council’s own historical agendas, minutes and policy statements it secretly dumped in the Harbour mouth hoping nobody would notice.

With much amusement the Captain and crew’s embarrassed faces are clear for us all to see!

Perhaps Mr Cole and Mr Siddons can inform us all with another “Myth Buster” article in the next Residents News with a feeble attempt once more to rewrite history!

[Note to Editor: I wonder if Mr Greene was also kept in the dark or was he complicit in this deception?] 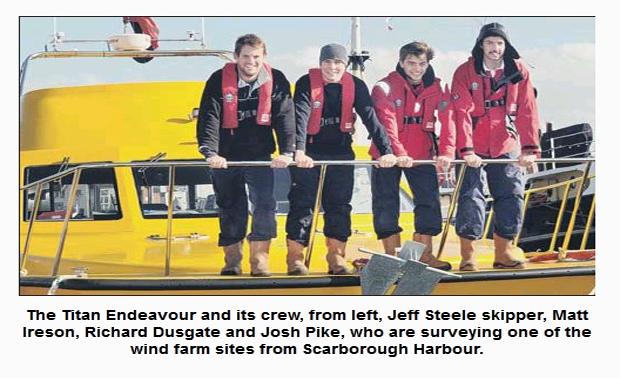 BUSINESSES in Scarborough are being encouraged to take advantage of the opportunities offshore wind farming is set to create for the region.

Plans are in place for three major wind farms off the East Coast, two of which lie directly off Scarborough’s shores.

Speaking yesterday at a business breakfast, organised by Handelsbanken at Scarborough Rugby Club, Alex Richards, offshore wind project manager for Scarborough Council, told delegates how the town is perfectly placed to benefit from hundreds of jobs as a result of the project. He said:

“These wind farms are an entirely new industry and form one of the biggest single engineering projects the UK has ever undertaken.

“There will be thousands of workers who will be living on site at any one time, it will be like a whole community off our shore.

“This community will need servicing and maintaining. They will literally need everything to be supplied from shore, and we are well placed to make sure we are the people supplying them.

“Our biggest threat is Europe. We have to make sure these contracts are going to UK business, and most importantly to businesses from the Scarborough, Filey and Whitby area.”

The proposals for the farms are currently in the process of securing planning permission from the Crown Estate.

This stage is expected to last into 2014, after which private sector funding will be sought from the energy companies.

It is expected construction will start in 2015.

The council is currently working in partnership with education providers, particularly with Graham-raincliffe Federation and George Pindar Community Sports College, to promote careers in engineering and manufacturing to ensure a supply of skilled workers to the industry. 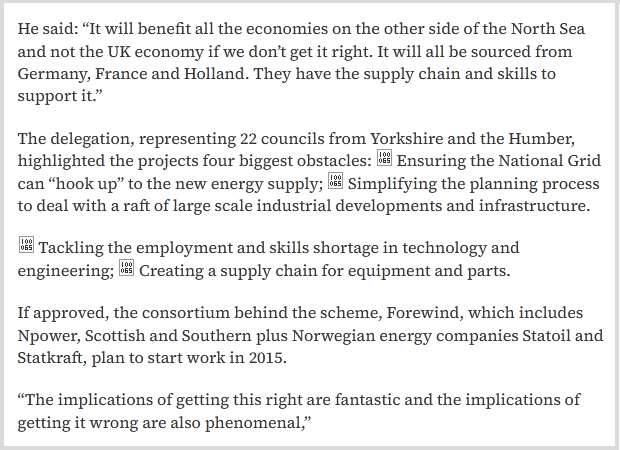 quoted in the Scarborough News on 25th October 2018:

Yet the commitment to the ‘renewables’ industry is omitted from the Town Deal application documentation.

Alas (we are told), it is too late now. Sir Robert reckons “the ship has sailed”.

Has he any idea who is at the helm?

Report – the Bureau of Investigative Journalism