North Yorks Enquirer Harbours correspondent ALLAN ROBERTS examines the curious disappearance of plans for a Boat Hoist from the Town Deal application for grant funding for the ‘regeneration’ of Scarborough’s West Pier.

An article recently published in the Yorkshire Post states that a prominent local player in the offshore ‘renewables’ industry, Dalby Offshore, has pledged support for a Boat Hoist at Scarborough Harbour. (YP article available here, and at the foot of this article).

This support should come as welcome news to the Harbour-users of that port, where a Boat Hoist has long been regarded as an essential, and long overdue, facility at Scarborough Harbour.

However, those hopes were dashed by this response of Scarborough & Whitby MP, Sir Robert Goodwill, which was:

A Boat Hoist is not a ‘new suggestion’ by any stretch of the imagination, as Alex Richards, Head of Economic Development and Regeneration Services at Scarborough Borough Council, can confirm.

In 2012, Alex Richards (inset in main image, above) was the Project Manager of an earlier West Pier ‘regeneration’, when a Boat Hoist was first proposed for West Pier, as part of a concept by marine consultant Carrie Nicholson, who was employed by the Council on a 12-month contract. This proposal has already been the subject of a detailed article on the Enquirer and can be accessed via this link:

To summarise, the concept proposed by Carrie Nicholson was to.

“Provide a new Boat Hoist  capable of lifting boats up to 50 tonnes – either on the West Pier or on a site adjacent to the Ask restaurant.

The creation of a dedicated and secure boat storage area which would give fishermen and other boat owners space to undertake repair and maintenance tasks on-site.

This would be available to all users, both leisure and commercial, of the harbour.”

In June 2019, during the faux consultation meeting at St Thomas Community Centre, the need for a Boat Hoist at Scarborough Harbour was once again made clear to the Council’s consultants, Hemingway Design.

In March 2022, following lobbying from Harbour-users, Cllr Jefferson indicated her support for a Boat Hoist.

On 4th April 2022, Subsea Consultant, Bob Roberts, was asked by Scarborough Harbourmaster Captain Burrows to produce a Business Plan for a Boat Hoist, for consideration by the ‘regeneration’ team.

On 3rd May 2022, Bob Roberts, delivered that Business Plan to Captain Burrows – and at no cost to the Council, may I add.

I understand, also, that in May 2022, the Boat Hoist plan was the subject of an Extraordinary Meeting of the Scarborough Harbour Executive, whose membership were acceptive of the plan.

Mr Roberts’ Boat Hoist plan clearly identifies a credible source of funding that would have met 75% of the expenditure, as a ‘standalone’ project, completely separate from the Town Deal Board plan, thus rendering Mr Goodwill’s comment regarding the Boat Hoist –“It might risk the Government funding package. The money has been signed off. The ship has sailed” as nonsensical, and makes me wonder if our MP even takes the time to read his correspondence.

Let me remind readers; Mr Goodwill is a member of the Town Deal Board, a group of people with zero maritime business experience, who intend to spend £11.4m to provide absolutely nothing new on West Pier, except another fish-and-chip restaurant, and an area for car-boot type events.

The sad part of the West Pier fiasco is that the Town Deal Board has had access to an Officer who is minuted as having a presence at every one of the Town Deal Board meetings. That person is the Council’s very own Economic Development Project Manager, Alex Richards.

Mr Richards is, perhaps, the most knowledgeable Officer presently employed by SBC in relation Scarborough Harbour and its requirements, having been involved in several ‘regeneration’ projects at the Harbour over the past 20 years.

Mr Richards also has deep insight into the needs of the ‘renewables’ industry and its onshore requirements.

In 2015, when the blogsite www.whitbywind.wordpress.com was created specifically to promote Scarborough & Whitby Harbours to the ‘renewables’ industry, of the 22 items posted on that site, 19 are attributed to ‘Alex Richards2014’, and the remaining 3 to ‘whitbywind’.

On that basis, I suggest the Mr Richards could reasonably be described as being the Webmaster of that site.

In 2016, according to the journal Wind Energy News (WEN), Mr Richards also represented Scarborough Borough Council as a member of the Advisory Team of the Team Humber Marine Alliance (THMA) as it bid for a share of a potential £20bn worth of opportunities in the North Sea offshore wind sector for a growing membership of more than 200 companies.

At that time, Team Humber Marine Alliance had office space in Scarborough Town Hall (in addition to its main premises in Hull), giving it a base to meet with local members and contacts as well as working more closely with the Council.

“Mr Richards role at Scarborough Council, was to oversee the positioning of the region and specifically the ports to take advantage of the opportunities available within the offshore wind sector with a focus on the operations and maintenance.”

“Alex was keen to express was the Council’s keenness to make itself known outside of its area, this has included being instrumental in the setting up, some 4 years ago, of an APPG (All-Party Parliamentary Group) which meets at Westminster regularly.”

Mr Richards, then, is indeed the most knowledgeable Officer presently employed by SBC in relation to Scarborough Harbour and its requirements.

According to a 2011 report in the Northern Echo, Mr RICHARDS is thoroughly aware of the crucial necessity of securing adequate infrastructure to facilitate servicing the ‘renewables’ industry:

And yet there is no indication that any advice has been sought from, or volunteered by, Alex Richards, to the Town Deal Board and its plans for the ‘regeneration’ of West Pier, regarding the obvious benefits of providing a Boat Hoist and establishing a Vessel Maintenance Hub.

Nor is there any indication that the Town Deal Board has ever been made aware, or considered, that this would make the West Pier attractive to the ‘renewables’ industry and, more importantly, would fit perfectly within the Council’s adopted policies and aspirations for Scarborough Harbour that are so clearly defined on the Council’s website and also outlined by Alex Richards during his interview published in the ‘renewables’ industry’s journal, Wind Energy News.

Certainly, there is no mention of the ‘renewables’ industry anywhere in the Scarborough Town Deal Investment Plan.

Here is an image of the rationale for the West Pier proposals from p.58 that Business Plan (N.B – no mention of ‘renewables’): 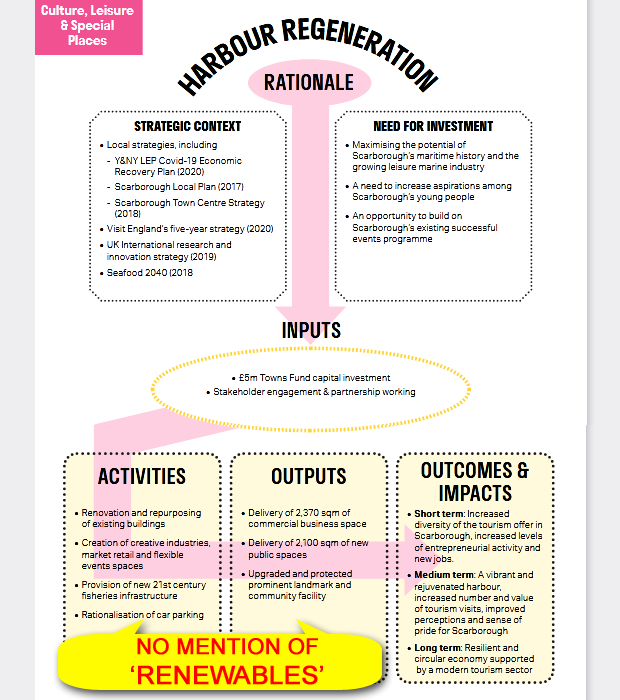 Now consider the following extract from the Portfolio Holder’s Report to the Overview & Scrutiny Board, dated 31st October 2018, being the Consultant’s Brief in preparation for the West Pier ‘regeneration’ TDF application: 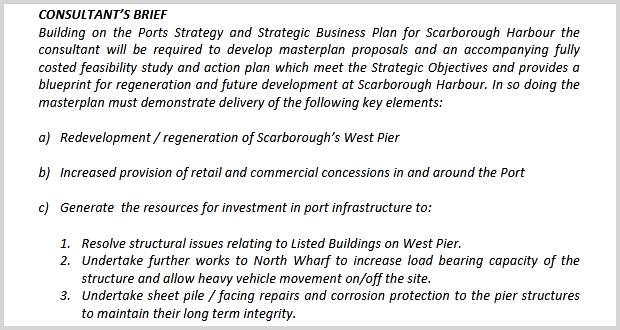 How disappointing then, that Scarborough Borough Council is blatantly disregarding its own policies by encouraging the Town Deal Board to sacrifice Scarborough’s only maritime asset, the Harbour, on the altar of tourism.

It is essential, as the enthusiasm and support for the Boat Hoist gathers momentum, that the Town Deal Board revisits the plans for West Pier, acknowledging the fact that maritime businesses require space in a maritime area, and ensuring that enough space remains available to allow for: 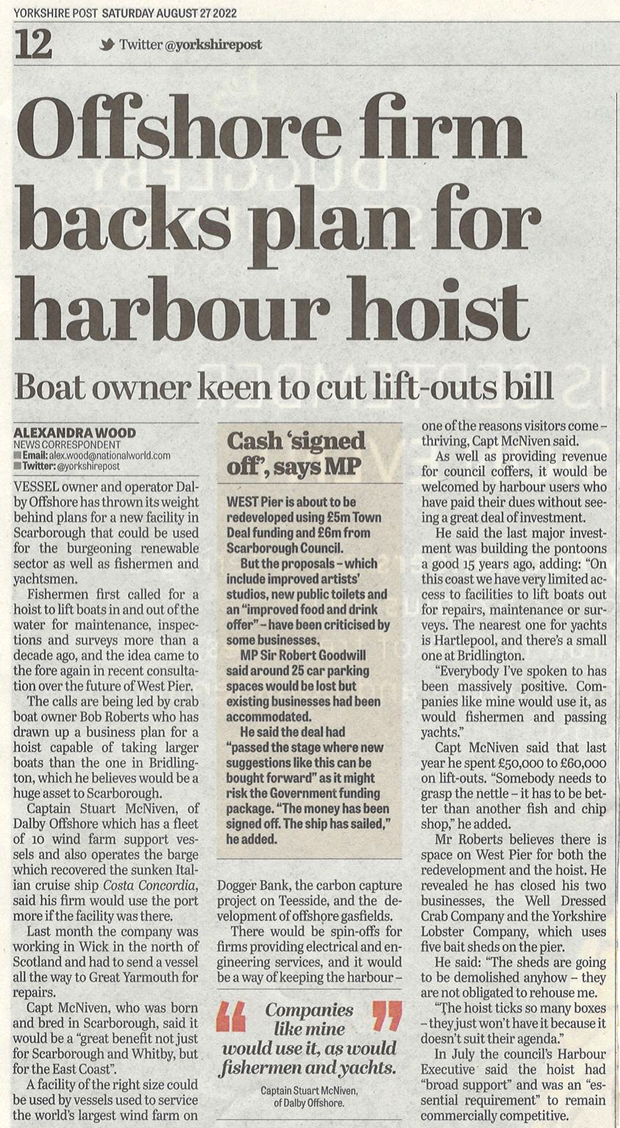