A Letter to the Editor from Mr Bob ROBERTS, in response to a recent Guest Author article, on the subject of the rank mismanagement of traffic on West Pier, Scarborough.

Mr ROBERTS declares an interest in the future of Scarborough Harbour in general, and the West Pier, in particular.

Allan Roberts’ article “High Risks- Low Safety Standards” with regard the West Pier Health & Safety fiasco, highlights a very real problem in which it seems that the risk of harm to the public is being forfeited for revenue by Scarborough Borough Council under a very mediocre and complacent Health & Safety regime assessment of just how the risks to the general public are perceived.

This story began in May, when I witnessed what is known in Health & Safety parlance as a “near miss”, in this case it was a VERY near miss that could have cost a toddler her life. Thankfully, no harm was done and she walked away largely unharmed and apparently oblivious to what had just happened.

Nevertheless, the near miss prompted me to ask, via email, a Mr Robert Webster (who is, I gather, the Health & Safety practitioner for the Borough, including the town) whether any consideration had been given to the high level of vehicular activity on West Pier for the assurance of public safety. That email was sent on 29th May. I am still awaiting a response today (Wednesday 15th August).

However, my email did (it would seem) prompt Mr Webster only the following week to pay a visit to West Pier, accompanied by Mr Martin Pedley, who I understand is the Risk Manager for SBC. The visit, I am told, was itself not without its own drama, as  Mr Webster himself  also became a “near miss” victim for a manoeuvring HGV.

Obviously, the Health & Safety department was oblivious to just how much industrial activity occurs on an almost 24-hours-a-day/7-days-a-week (and on almost a 365-days-a-year) basis.

Scarborough Harbour has, in recent years,  transformed itself into what can only be described as a seafood hub for the East coast, with a variety of seafood types leaving and arriving at the port, from the Orkneys and Shetlands down to the South Coast, hauling scallops, prawns, fish, lobster and crab.

Much of it arrives and leaves by HGV and is subsequently redistributed into vans. As a consequence, there is frequently a plethora of forklift-trucks emptying and loading wagons and vans, along with the discharge of catch from vessels at the quayside. This, to the reader, paints a very busy picture; indeed it is a very busy part of the harbour scene within a highly-congested area within which, at present, the public are free to wander, thereby putting themselves at risk.

Access to West Pier for a large HGV, sometimes a left-hand-drive vehicle coming from the continent, is difficult in itself, with 9 times out of 10 any vehicles attempting to leave West Pier at the traffic lights either having to jump the lights of reverse onto West Pier, often against a queue of traffic behind it, and with pedestrians forced onto the road due to lack of a secure footpath. (see https://youtu.be/pLji93SHOfs ). 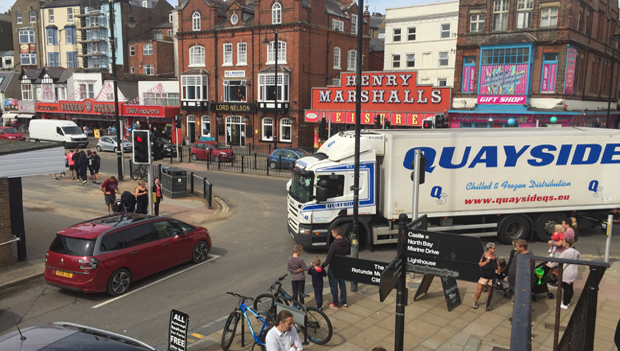 Returning to the visit by SBC Heath & Safety Officers, it would seem a perfunctory Risk Assessment (RA) was hurriedly cobbled together in order to at least be seen to be doing something. The Risk Assessment for the Harbour was created and signed-off by the Deputy Harbour Master Mr Chris Burrows and covered a multitude of other risks, including terrorists attacks. No Traffic Management Plan (TMP) has yet seen the light of day or, at least, has not been shared with those of us who have to abide by it even if it’s not practicable – much like the RA.

None of the other mitigating measures to reduce risks in other aspects the Harbour have been implemented at all.

The whole exercise has the appearance of a box-ticking exercise.

What did come out of the RA was that SBC has ‘gained’ 6 additional parking places – this, reportedly, much to the jubilation of the Harbour Master, Mr Ian Vasey. Why that should be is oddly inexplicable, since none of the West Pier car park revenue is ploughed back into the Harbour coffers. Maybe he is on some kind of bonus scheme – who knows?

Following only a week later after the HSE visit, North Yorkshire County Council contract line-painters arrived on West Pier to re-line with a new grid layout, albeit one based (I’m told) on a different plan to the Scarborough Council version, and in any case, the contractor ran out of paint and left the Pier unfinished.

The chaos that ensued  is now almost legendary around the Harbour in terms of unclear and unfinished markings.

NYCC again returned the following week with more yellow paint and completed some of the work and have returned yet again, only last week, having found some black paint to paint out the incorrect white markings. Now you sees me, now you don’t.

What is obvious is that this whole fiasco is as a result of complacency and insufficient attention to Heath & Safety around what is now a very busy industrial area.

Even the Scarborough Borough Council Dean Road Depot, where very limited public access is allowed, has hard barriers in key locations, to protect SBC employees. Pedestrians on the West Pier are in far greater danger.

SBC seem to put the value of a parking place – according to the former Council Head of Technical Services department Mr John Riby – at £2,000 per annum. That value is placed far and above the value of the life of child or indeed any member of the public paying less than total attention to their surroundings whilst on holiday visiting Scarborough Harbour.

Quite possibly (if not probably), the driving factor for this mediocrity and complacency is the demand for revenue from parking and its value to SBC coffers, which obviously over-rides any safety consideration. Even the Risk Assessment gives mention to the potential for having a parking attendant on West Pier who could also double up as a traffic marshal.

The £12,ooo revenue from the 6 new parking places would largely fund that role and in fact create a job; surely that would be a start in trying to find a solution to the prevailing chaos. Another possible solution would be a sign stating how many parking places are available – and thereby end the continuous flow of traffic driving around West Pier in a fruitless search for a parking place.

The ideal solution, however, would be to restore West Pier to its intended purpose, before it was “misappropriated” by the SBC Tourism Department (from Harbour Assets). By doing so, this would allow the Harbour and its fishing activities to prosper by enabling shellfish processing companies to expand and achieve their full potential.

Of course that doesn’t tick the tourism ambition box, but it should surely figure in the growth of the plans recently announced by SBC.