The subject of Scarborough Borough Council’s performance on Health & Safety issues has featured in the NYE on several occasions recently, notable in connection with the HGV manoeuvrings in and around the West Pier car park in Scarborough and with the Council’s non-compliant ‘Swan’ pleasure vessel at Peasholm Park.

Many readers will be aware of the heart-rending tragedy that occurred at Seaton Garth, near the south pier at Staithes, at around 4.47pm on Wednesday 8th August 2018, when a rock-fall ended the life of nine-year-old Harriet Emily Nicola FORSTER, from Oxford, who was visiting Staithes with her family. I have no doubt that the entire NYE team – and readership – will join me in offering deepest condolences to the bereaved family, whose loss is as unimagineable as it is irredeemable.

Shortly after the incident, North Yorkshire Police (NYP) made an appeal to the public for information for a report to the Coroner’s office.

As chance would have it, I was able to provide NYP with the following information which had not, to my knowledge, appeared in any press reports of the tragedy, so I responded verbally to the appeal by dialling 101. No doubt that conversation was recorded.

I informed the Police that, one week prior to that dreadful incident, at 3:15pm on 1st August 2018, a report of a similar rock-fall at the same location appeared on the Whitby Wildlife Sanctuary Facebook platform. 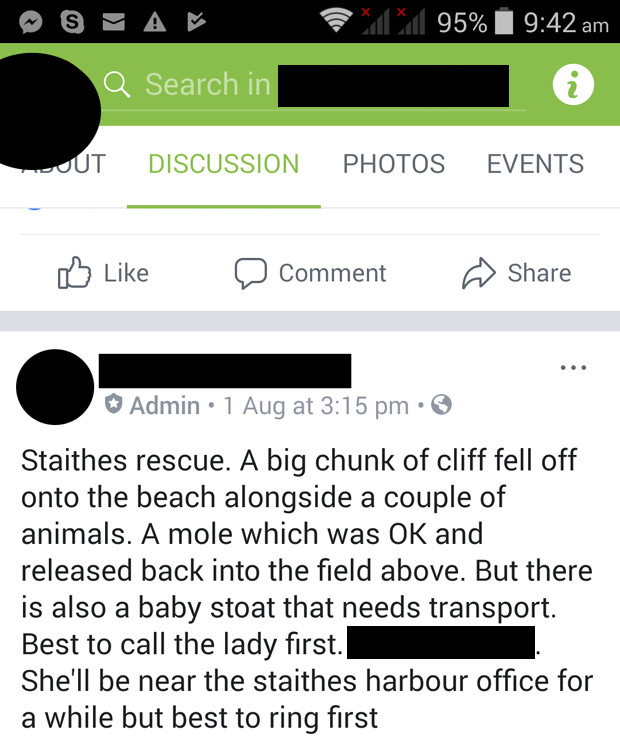 It seemed likely to me that an incident so close to the SBC Staithes Harbour Office must surely have been logged with one or another of the authorities. I told the Police that I would have expected the information to have been shared with the Coastguard, the RNLI, and the Borough Council.

Following that telephone conversation, I forwarded to NYP a written account of my limited knowledge of the events preceding the tragedy, and an un-redacted version of the above screen-shot. The screen-shot therefore included the mobile number of the lady close to the Harbour Office who originally called in the report. Thus, the Police were provided with two avenues of further enquiry.

My email received only an automated read-receipt from NYP, but in due course I received a very informative follow-up telephone call (no doubt also recorded) in which I learned that there was apparently heated dispute over which authority bore the burden of responsibility for coastal erosion in general – and the Health & Safety of the public, in particular – and that Scarborough Borough Council had already denied any responsibility.

This came as a considerable surprise to me because, until relatively recently, the Scarborough Borough Council Cabinet included a Portfolio Holder for Harbours, Coast & Flood Protection – Councillor Mike COCKERILL [Ind.Ind.].

My own understanding is that the land itself where both of the rock-falls took place is in the freehold of the National Trust, though I do believe that the responsibility for adequate signage resides with Scarborough Borough Council.

Locals have reported that the ‘Beware Dangerous Cliffs’ sign on the approach to the site of the rock-falls is old and dull and has not been repainted or replaced in many years. At the time of writing, it has still not been renewed. 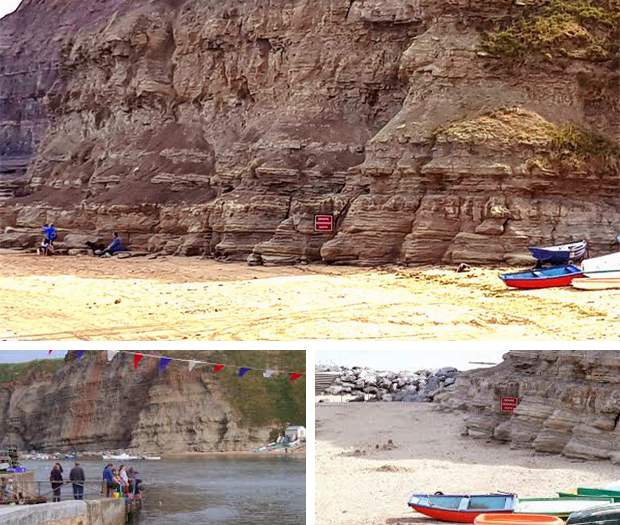 Locals have also reported that, in the immediate aftermath of the second rock-fall, Emergency Vehicles were impeded in their progress by the number of unsuitably and illegally parked cars. Responsibility for Parking resides with the Cabinet Portfolio for Leisure, Councillor Martin SMITH [Con.], best remembered as the former Mayor who adjourned a meeting of Full Council because the public gallery applauded Councillor BARNETT [Lab.] when he outrageously declared that he had always understood that he was elected to represent the people.

I now recall that, as recently as 22nd March 2018, SBC was trumpeting its coastal protection initiative at nearby Runswick Bay on the Council’s website:

On 11th June 2018, the Council indulged in some further chest-beating regarding the delivery of a £13.453 million scheme to stabilise the cliffs behind the Spa complex in Scarborough:

But Staithes straddles the northern boundary of the Borough of Scarborough, about as far out in the sticks as it goes. It lacks the credentials to be glorified by any of the Council’s vanity projects, or even to command much attention at all. No money for effective signage there . . .

After SBC’s failure to respond to the ‘flashing red light’ of the earlier incident (on 1st August 2018, when a mole and a baby stoat survived a rock-fall – though other creatures may have been less fortunate), as well as the West Pier and Peasholm Lake ‘accidents waiting to happen’, is it now time for the Health & Safety Executive to investigate the practices and policies of Scarborough Borough Council in the entire area of Health & Safety?

Certainly, SBC’s Assets & Risk Manager Martin PEDLEY and Health & Safety Officer Robert WEBSTER should, at the very least, consider re-training, though past experience tells me that the Directorate and the Leader will defend them – even in the Courts, should it come to that – and with the taxpayers’ money, if the futile defence of the successful legal action brought by Ben MARRIOTT offers any guide. Perhaps I am alone in my disappointment and disgust that, at SBC, nothing is ever anyone’s fault and no-one is ever brought to account.

For readers using smaller screens – and lest we forget – the caption beneath the image of SBC Chief Executive Jim DILLON reads “Named by judges … Jim Dillon”.