NYE Harbours Correspondent ALLAN ROBERTS identifies another significant omission from the Council’s duties to Harbour-users. As ever, ALLAN makes his point by citing the Council’s own words . . .

Scarborough Borough Council claims that part of the Scarborough West Pier Regeneration ‘Masterplan’ is focused on “enhancing facilities that support the fishing industry”.

If that statement is really true then they need to take a look at this proposal, taken from the last ‘redevelopment plan’ of 2012, authored by Carrie Nicholson, who was employed by the Council on this 12-month project.

“It is proposed that a new boat hoist be constructed which would be capable of lifting boats up to 50 tonnes – either on the West Pier or on a site adjacent to the Ask restaurant. This would be available to all users, leisure and commercial, of the harbour, with discounted rates for SFC members.  Currently any Scarborough vessel that needs repainting, routine maintenance, or even emergency repairs has to be sailed round to either Bridlington or Whitby to come out of the water.

Apart from the serious safety implications of sailing a potentially unsafe vessel to another harbour to undertake emergency repairs, having to go to Bridlington or Whitby to use the hoist places additional financial burdens on the Scarborough fishing industry, and reduces its competitiveness compared to the other two ports.  These burdens include the diesel for the return journey; petrol costs and travel time to the other port whilst the work is being carried out; enhanced rental fees for both the boat hoist and any hard-standing, as the vessel is a visitor to that port; and an increase in the number of days that the boat cannot earn money from going to sea.

Linked to the construction of a new boat hoist, the concept plan sees the creation of dedicated and secure boat storage area  which would give fishermen and other boat owners space to undertake repair and maintenance tasks on-site.”

In June 2019, the risks foretold in Carrie Nicholson’s proposals (above) were played out for real when a 30ft coble on passage from Scarborough to Bridlington to use the lift-out facilities (so clearly lacking at Scarborough) suffered engine failure and asked the emergency services for assistance.

At 3.30am the Filey lifeboat was launched and quickly located the coble, close to Filey Brig, put a crewman aboard and then towed the coble to Bridlington where she arrived at 6:00a.m., and then  returned to Filey at 8:00a.m.. There is video footage of the incident in this link:

This, of course, placed the owner in exactly the scenario that Carrie Nicholson warned of in the 2012 plan, as a direct result of which the vessel had to conduct a 40 mile round trip to Bridlington.

Fortunately, in this case, the incident had a safe ending, thanks to the RNLI volunteers, some of whom, despite the early call-out, would have had to go straight to their normal day jobs.

The incident, which could easily have ended in tragedy, illustrates precisely why there is need for adequate lift-out facilities at Scarborough, which would avoid small open craft having to undertake these lengthy trips. 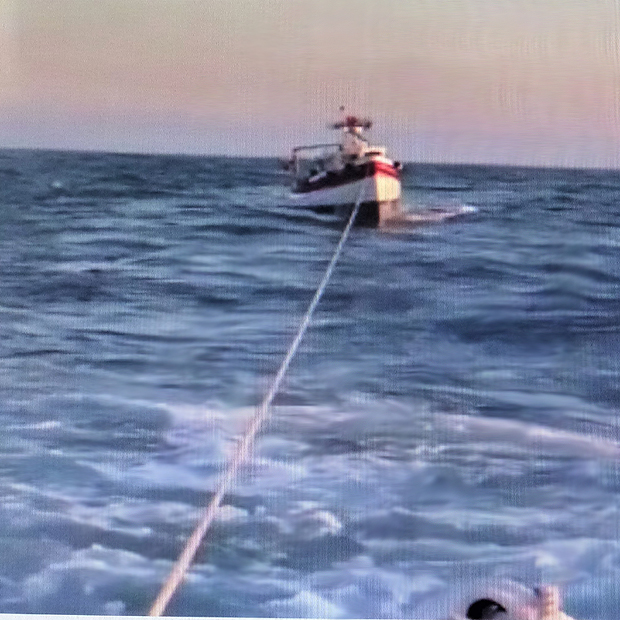 There has also been new MCA legislation since September 2021 that make the boat-lift proposals even more imperative, in that all under-15m fishing vessels are now required to undertake a periodical ‘out of water’ survey by the MCA, who specifically state that:

‘the owner must provide/arrange safe access to vessel including external hull areas.’

I understand that the MCA have informed a local boat owner that they consider the drying out ‘grid’ at Scarborough to be unsafe/unfit for their surveyors to use.

It is apparent, then, that the senior maritime safety authority in the UK (MCA) has condemned the Scarborough Harbour grid as a facility that is unsafe/unfit for purpose and, as such, is unsafe for ANY vessel to use, whether a commercial or leisure vessel.

As such, the grid at Scarborough Harbour is now redundant.

The only Harbour Authority alternative is the Vincent Pier 4-ton swl crane, which could only be described as an inefficient and unreliable piece of machinery from day one, and was never really fit for purpose. Installed in 2005 at a cost of £45,143, in the course of first 10 years of operation, due to the cost of maintenance and repairs, the total cost of this inadequate crane provision had escalated to £73,618,

Here is an image of one of its many mishaps when it failed to lift even a small 8m fishing vessel. 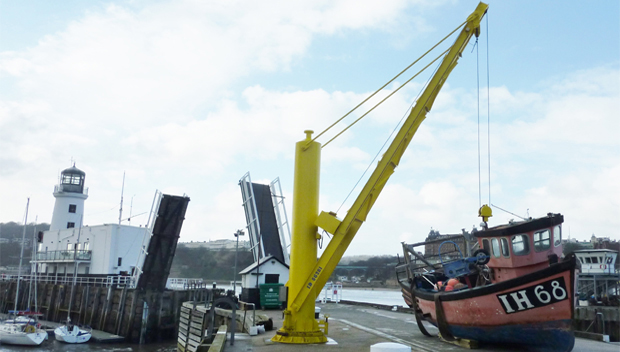 Because the Harbour Authority chose to ignore the proposals for the boat hoist outlined in the 2012 plan, the Harbour does not have an adequate lift out facility for lifting anything other than small vessels. As a result local vessels are obliged to hire in mobile cranes to lift vessels onto the ONLY area of the harbour presently suitable  to safely do so, the West Pier, as these images will show:

Neither the Hemingway Design nor the Mason Clark proposals for the ‘regeneration’ of West Pier make any provision for vessel maintenance in terms of ‘lift out’ facilities, nor do these plans provide any space or hardstanding to carry out MCA surveys and maintenance.

This will cause problems for the fishing fleet, and is a problem that the Council must be well aware of when one considers that the Council’s own Economic Development Project Manager, Alex Richards, is also a member of the Scarborough Harbour Executive, and would have been involved with Carrie Nicholson in producing the 2012 development plan.

The fishing industry is based on West Pier simply because it would be impossible to operate from any other location in the Borough. In contrast, art studios and restaurants are not dependent on access to the sea, or the piers, but are able to operate elsewhere, and yet they are at the ‘front of the queue’ for consideration in this ‘masterplan’.

The West Pier Regeneration ‘Masterplan’ has been described by Cllr Jefferson as:

“a once in a lifetime opportunity to help, support and transform our Fishing Industry and look at all Harbour Users requirements and needs”.

As the 2012 proposal states, a boat lift-out system would not be used by the fishing industry alone, but would be welcomed, and meet the requirements of, all Harbour users. I am aware that since Scarborough Marine Engineers closed down, the fleet has missed not having a resident engineer. Perhaps this would encourage a marine engineer to start up at Scarborough.

I suggest that Cllr Jefferson has her priorities misplaced, and that another ‘lifetime’ is too long to wait for Scarborough Harbour to provide the same up-to-date facilities as those offered at Bridlington, and that the West Pier is the ideal location for such a facility.