At 2:00pm on Thursday 27th October 2022, the Audit Committee of Scarborough Borough Council met under the Chairship of Councillor Alex BAILEY [Lab.]. It may as well have taken place in Schrödinger’s box at the centre of a black hole.

The first two Items on the Agenda were resolved swiftly, routinely and quite openly – 1. – Declarations of Interest (none) and 2. – Minutes (of the meeting held on 21st July 2022). So far, so good.

What concerns us here is Item 3 – Public Questions (none).

This was not strictly true. In fact, it was not true at all. There had been a duly notified Public Question from a member of the public – Mr James CORRIGAN’s attempt to discover who bears ultimate responsibility for the finances of a Council which has not had its Annual Accounts ‘signed off’ for SEVEN YEARS – but this totally reasonable Question was disqualified on the specious grounds of it being “defamatory” and “offensive”.

Mr CORRIGAN’s Question, concerning the fact that the Council’s Annual Accounts have not been signed off by the External Auditor, MAZARS, since the financial year 2014-15, and the draft Annual Accounts for the financial year 2021-22, due for publication by 31st July 2022 (and to be made available for public inspection from 1st August 2022), have been repeatedly ‘deferred’ and, in fact, had still nor been made available for public inspection, up to and including Thursday’s meeting. (As an interesting aside, we learned that Mr Mark KIRKHAM, partner at MAZARS (who also audit East Riding of Yorkshire Council’s Annual Accounts), has very prudently passed the SBC External Audit account to another member of the firm; I believe I know why).

“I note that the report in relation to this Agenda Item has not been published prior to the time specified in the Constitution for a member of the public to raise questions (two clear days prior to the meeting).

I further note that the Accounts were intended to be published by 31 July 2022. At the end of July a notice was published on the Council website stating that “Notice will be given when the accounts have been published, which is likely to be in September 2022”. That time has clearly passed and we are now waiting for the late report to disclose this information. Clearly the ongoing delay denies the public the opportunity to raise questions on the accounts in time for the Auditor to investigate and substantively reply prior to the Council being dissolved as part of the devolution process. These actions could be perceived as an attempt to avoid external scrutiny from the auditor and members of the public until after devolution.

Will any responsible party remain culpable (whether or not employed by North Yorkshire Council) for any unlawful items in the accounts that come to light after devolution as part of the conclusion of the Audit process?“

In brief, Mr CORRIGAN asked whether or not anybody would be held to account, after the abolition of Scarborough Borough Council at midnight on 31st March 2023, for any wrongdoing identified within the preparation and production of the Accounts. He did not identify any potential suspect(s). He did not impute any wrongdoing. He was simply asking a Question (perhaps for a friend).

Where, if anywhere, does the buck stop?

Now consider the patent absurdity of the Council’s determination to evade this ultimate Question on grounds that it is “defamatory” and/or “offensive”.

I have some familiarity with the Defamation Act 2013: 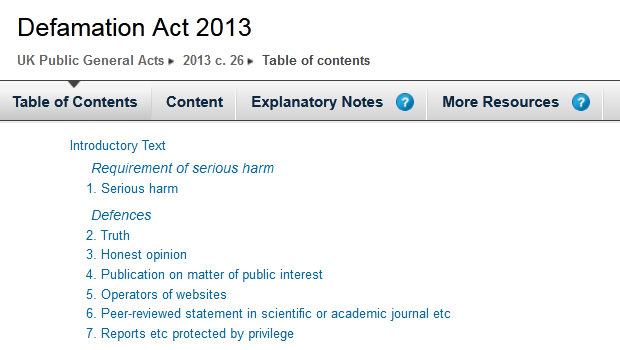 Surely, a Public Question submitted in accordance with the requirements of the Council’s Constitution cannot “cause serious harm to the reputation”?

Surely, a Public Question submitted in accordance with the requirements of the Council’s Constitution cannot cause the Council “serious financial loss”?

(1) It is a defence to an action for defamation for the defendant to show that the imputation conveyed by the statement complained of is substantially true.

Surely, the extent to which a Public Question (not a statement), submitted in accordance with the requirements of the Council’s Constitution,requires no defence. Only if the Council, or an Officer of the Council, was falsely accused of an unlawful act would the defence of “substantial truthfulness” engage.

Surely, a Public Question, submitted in accordance with the requirements of the Council’s Constitution, is just that; a Question – NOT a statement.

Mr CORRIGAN may hold an opinion (as may we all); however, it is not made manifest in his Question. And even if it were, it would remain an “honest opinion”.

Hopefully, the foregoing suffices to demonstrate that the Council’s first ground for ‘deeming’ Mr CORRIGAN’s Question ‘rejected’ – that it is “defamatory” – is utter poppycock.

As to it being “offensive” – the Council’s second ground ‘deeming’ Mr CORRIGAN’s Question ‘rejected’ – who claims to have been “offended” and on what grounds? And anyway, so what? Following the passing of the Defamation Act 2013, the following clarification appeared online:

In my view, SBC has clutched at a pair of non-existent straws for the sole purpose of preventing scrutiny and/or criticism of the way in which the Council has dealt with its duties to prepare accurate Annual Accounts and to make them available for public inspection, in accordance with the law of the land.

In short, I find myself asking: What is it that Senior Officers so keenly feel this desperate need to hide? (This is a rhetorical question; in fact, I have a damned good idea).

In order to demonstrate the extraordinary lengths the Council has pursued to evade Mr CORRIGAN’s Public Question, I invite readers to review the following thread of correspondence between Mr CORRIGAN and the Council dating from 1st May 2022:

Readers who may not wish to invest the time necessary to read and digest the entire ‘thread’ are encouraged to examine, at least, Mr CORRIGAN’s Formal Corporate Complaint, beginning at Page 8.

Enshrined in Council Officers’ employment contracts is the rule that a Formal Complaint against an Officer can only be investigated by an Officer more senior in rank/pay-grade. In the case(s) of Mr EDWARDS, Mrs DIXON and Mr BRADLEY, only the CEO meets this requirement.

But on Monday 7th November Full Council will be called upon to ratify and implement the Appointments Committee’s Recommendation to appoint Mr EDWARDS (my god!) to the position of CEO and Head of Paid Service.

Clearly, Mr EDWARDS is not permitted to investigate himself. So where does the buck stop? Must it pass to the NYCC Director of Legal, Mr Barry KHAN (a man in whose integrity I have every confidence), or Mr Richard FLINTON, NYCC CEO? The Rt.Hon. Michael GOVE, Secretary of State for Levelling Up, Housing and Communities? The Rt.Hon. Victoria PRENTIS MP, the Attorney General? The Prime Minister (this week), Rishi SUNAK? Yoda? Anyone?

At Scarborough Borough Council, the over-estimated, over-rewarded, over-trusted, over-paid, over-their-heads overseers of our public finances are seemingly impossible to hold to account.

Returning to the present, Mr Nick EDWARDS, the s.151 Officer (Director of Finance), has finally presented his DRAFT statement of accounts for 2020/21 – not, however, to the Audit Committee, in time for last Thursday’s meeting, but during the course of Thursday evening, long after the Committee members had left the building.

The 2021/22 Annual Accounts have thus been concealed from press, public and elected member scrutiny for three months. Only a further five months remain in which to hold Officers to account. Alas for any rogue Officers, cleverer heads than mine will be dissecting the Accounts, I am quite certian, as I prepare this present article for submission.

The DRAFT Statement of Annual Accounts is available here.

It contains many points of concern which I will be examining in detail in future articles. For the time being, readers may be interested to examine the following information concerning the salaries, etc, of the Senior Officers who are apparently unaccountable to anyone.

One might be tempted to speculate that, for this kind of money (four Officers are collectively in receipt of just short of half a million pounds), they should be competent at least to the degree of preparing Annual Accounts, in a timely manner, that are not susceptible to VALIDATED Objections to the Whitby Harbour Accountor to arrange a £9 million loan that is adequately secured; or to grasp the fundamentals of the MRP Minimum Revenue Provision (without resorting to the manufacture of FUDGE); or to ensure that a commercial Operating Agreement contains an escape clause in the event of manifest failure on the part of an external party to deliver anything at all worthwhile.

But, no. We see, instead, that this sequence of dismal failure is rewarded by salary increases: 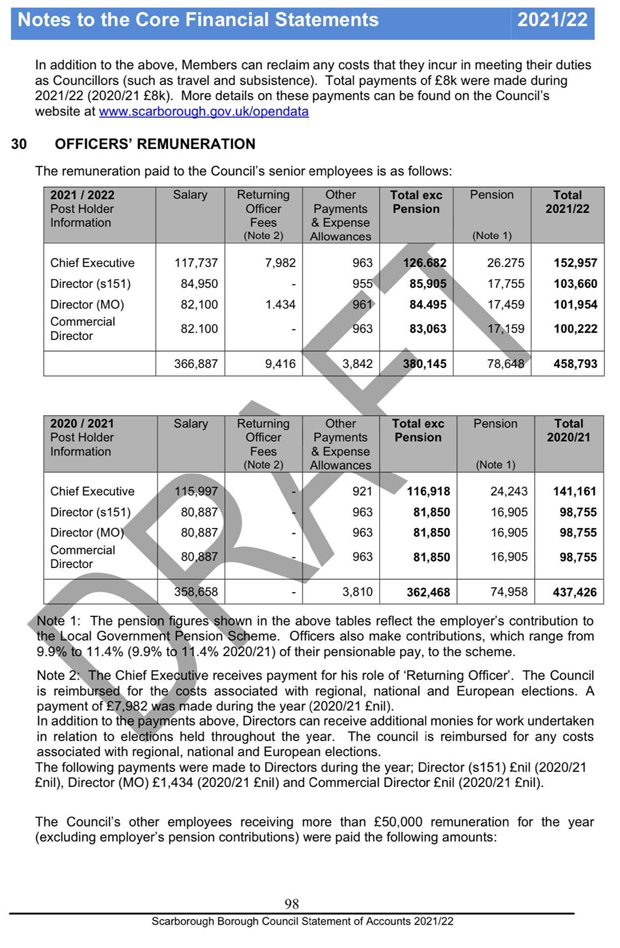 It has been widely reported the Mr Andrew PERN, of The Star in the Harbour in Whitby (amongst other quality eateries) has delivered SBC a very cross dressing down, describing the Council as “greedy”. The York Mix spells it out in an article entitled “Furious York restaurateur to close his seaside venue due to ‘utter lack of support’ from council”. The Yorkshire Post, too, in an article entitled “Michelin-listed Star Inn The Harbour at Whitby to close with chef blaming ‘greedy’ council for lack of support”, has covered Mr PERN’s censorious comments in some detail.

But the fact is that The Star in the Harbour is not alone. I can confirm that another of Whitby’s leading hospitality sector businesses – Harry’s Bar – has decided to call it a draw, for entirely understandable reasons.The Council has been squeezing everyone in the Borough with the highest Council Tax in the land. Businesses, particularly those presently persecuted in pursuit of the YCBID Levy, have been hammered in a desperate attempt to ‘balance the books’. (The hearing scheduled for 3rd November 2022 has belatedly been adjourned until the end of January. More on that presently).

Which brings me to the erroneous VAT treatment of the Levy – another bone of contention that has fallen under Mr CORRIGAN’s spotlight. He even pointed out the enormity of the error – two years ago! But the July minutes of the YCBID Board disclose that the Council is still desperately casting about for support, having commissoned advice from KPMG to contest Mr CORRIGAN’s revelations.

The MRP ‘juggling’ (known in accountancy circles as ‘fudging’) is another case in point.

It will not have escaped readers’ attention that Mr PERN is the second ‘heavy hitter’ to have slipped out of the Council’s grasp in a week – following Mr Nick THOMAS MBE, who has withdrawn his HQ Hotels offer for the former Indoor Swimming Pool land.

And I have received a message from Mr Peter LEE, well-known to readers for his part in the successful defeat of the Leader’s ‘flagship’ ARGOS deal, concerning his recent conversation with Scarborough & Whitby MP Sir Robert GOODWILL [Con.]. It confirms what few knew (but many suspected) – namely, that Mr PERN enjoyed ‘preferred bidder’ status for the new restaurant space integral to the Town Deal Board proposal to turn the West Pier into a tourism plaza:

Mr CORRIGAN’s Question is the one we ALL should be asking (and that includes you, Sir Robert):

WHERE DOES THE BUCK STOP?

WHO WILL CARRY THE CAN?