In 2009 it emerged that MI5, Special Branch and the Industrial Intelligence Section of the notorious Special Demonstrations Squad had infiltrated trade unions. Undercover police officers had provided information and intelligence on trade unionists, environmental activists, shop stewards and health and safety representatives to a shadowy private organisation called “The Consulting Association” (TCA). This in turn was passed on to employers by TCA and was used to blacklist workers from employment.

In 2009, TCA’s office was raided by the Information Commissioner’s Office, which served an enforcement notice against it under the terms of the Data Protection Act 1998.

In October 2013, the Independent Police Complaints Commission (IPCC) (now the Independent Office of Police Conduct or IOPC) confirmed that the police had colluded in the blacklist, saying it was “likely that all special branches were involved in providing information” to the list. This of course means that North Yorkshire Police Special Branch (known in NYP as “Ports Branch”) also probably conducted these operations in breach of the Data Protection Act. Clearly a flagrant misuse of police powers.

Full story can be read in Wikipedia here

The NYE has run a series of articles on undercover policing and they can be read below: 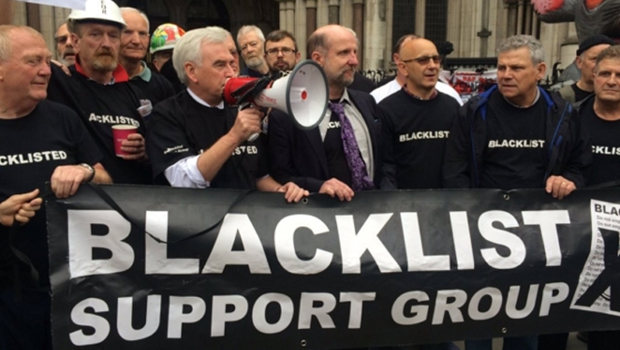 blacklisted from employment as a result of police cooperation with employers.

The ethical position of the police service

If it is to retain the confidence of the public, the British Police Service must remain independent of all commercial and political influences. This is an accepted principle of policing in Britain.

“Restrictions on the Private Life of a Police Officer

Members must abstain from any activity which is likely to interfere with the impartial discharge of duty or likely to give rise to the impression that the activity may do so. Police officers are also required not to take any active part in politics.”

The Code of Ethics is also commendably clear on the subject of impartiality:

1.1. According to this standard you must:

1.2. In abiding by this standard you gain and maintain the trust of the public, your leaders, your colleagues and your team. You are dependable and a role model.

1.3. The more senior in rank, grade or role you are, the greater the potential for harm as a consequence of any misuse of your position or any failure to meet the standards required by the Code of Ethics

Examples of meeting this standard are when you:

6.3. Membership of groups or societies, or associations with groups or individuals, must not create an actual or apparent conflict of interest with police work and responsibilities.

6.4. The test is whether a reasonably informed member of the public might reasonably believe that your membership or association could adversely affect your ability to discharge your policing duties effectively and impartially.

The Chief Constable’s membership of the FBINAA

The Chief Constable of North Yorkshire Police (NYP) Lisa Winward is a graduate of the FBI National Academy (FBINA) in Quantico Virginia, which she attended as a foreign student in 2011. This is a prestigious course to attend, places on it are highly competitive. She was selected for attendance from many applicants. It is clear that she did very well to obtain a place and to pass this course. Her attendance marked her out as a high flyer within NYP, probably leading to her accelerated promotion to Chief Constable and beyond.

Attendance at the FBINA also entitles her to be a member of the FBINA Alumni, which is called that FBINA Association (FBINAA).

Each year the FBINAA runs an annual conference at a City in Europe. Usually one of cultural significance that is a popular tourist destination. The NYE has run a series of articles on Chief Officers expenses generally and Chief Constable Lisa Winward’s tax payer funded visits to her FBINAA conferences at various locations in Europe:

This has been covered in the following NYE articles:

“Message from the Executive Director

The FBINAA is built on the foundation of knowledge, courage, and integrity. We believe we have much to offer one another. Please consider the information contained in the Strategic Alliance Program as a basis from which to work to create a dynamic and interactive relationship between your organization, the FBI National Academy Associates, and its 17,000+ members, in its 48 chapters, world-wide.

The implication being that the FBI NAA actively solicits funding from big business commercial organisations that makes them “more than financial contributors or vendors” to foster a “relationship to be an alliance” which gives them privileged exposure to the FBINAA members like Chief Constable Winward.

This FBINAA appeal for sponsors for the 2016 conference in Dresden, which Chief Constable Winward attended is explicit that it is offering privileged access to Chief Police Officers in return for money:

For some examples of the FBINAA’s sponsors click here.

For the benefits of being a sponsor click here. These include:

So what is the problem?

The FBINAA is an American organisation and its operation appears to me to be incompatible with the way impartial policing in Britain operates.

There are two general ethical issues for any police officer with being a member of the FBINAA, because of its sponsorship activities. These are:

The police sometimes have to police industrial disputes, complaints against security guards and environmental protests against commercial organisations. Some examples from North Yorkshire are below: 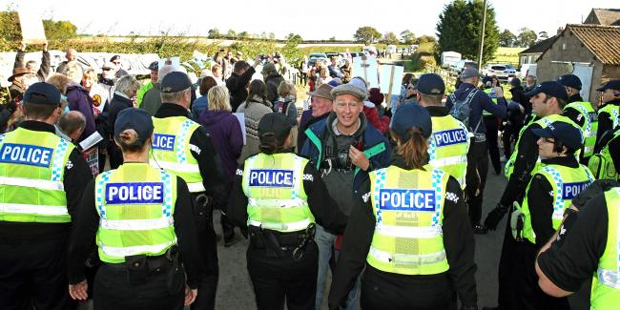 This video shows protestors asserting (wrongly in my opinion) that North Yorkshire Police (NYP) are acting on behalf of a commercial company, at a protest. Unfortunately, allegations of this nature are given credence because:

This undermines the credibility and the public perception of North Yorkshire Police’s impartiality. It also puts the Chief Constable in breach of Sections 1.1, 6.3 and 6.4 of the Code of Ethics.

This in turn it puts her in breach of Section 1.3 of the Code of Ethics for failing to set the appropriate example, for someone of her rank and seniority.

I am not in any way suggesting that Chief Constable Winward has allowed herself to be the subject of undue influence by one of the FBINAA’s sponsors. That is not the issue. As the Gloucestershire Police Force Policy and the Code of Ethics both point out. The issues are of perception and the impression membership of an organisation can give, coupled with the requirement for senior police officers to set the correct example and perfectly comply with the Code of Ethics.

So what is the solution?

It seems to me that having had these concerns pointed out to her, the best thing would be if Chief Constable Winward resigned from the FBINAA.

Chief Constable Winward has received an initial draft of this article and chose not to comment. So it appears that she does not reject these concerns and is happy to continue her membership of the FBINAA, despite the obvious conflicts of interest this entails.

Clearly this is unsatisfactory. So I have raised the situation with the Police Fire and Crime Commissioner for North Yorkshire, Mrs Julia Mulligan:

It has come to my attention that the Federal Bureau of Investigation National Academy Associates (FBINAA) that Chief Constable Winward belongs to, touts for sponsorship of its conferences, on the basis that sponsors will be in “alliance” with the FBINAA and will have special preferential access to its members. Which of course includes Chief Constable Winward.

In these days of public concern over climate change, the police are having to police “Eco Warriors”, Extinction Rebellions and fracking protestors to name a few. Under these circumstances, it is essential that every police officer is seen to be non-political and acting to uphold the law impartially. In particular, that police officers are not under the influence of big business, special interest groups, commercial companies and/or industry lobbying organisations.

Membership of an organisation like the FBINAA that offers preferential access to Chief Police Officers in return for money and which provides them with subsidised hospitality conflicts with this principle. It is also contrary to the College of Policing Code of Ethics and therefore unacceptable for a British police officer of any rank in any force. This is particularly true for the Chief Constable.

I would therefore ask that you raise these issues with Chief Constable Winward and ask her to resign from the FBINAA.

This will ensure that:

I look forward to your response in due course.

I will report back on Mrs Mulligan’s response. In the meantime, I will leave the last word to the College of Policing and Sergeant Michelle Jahangiri. 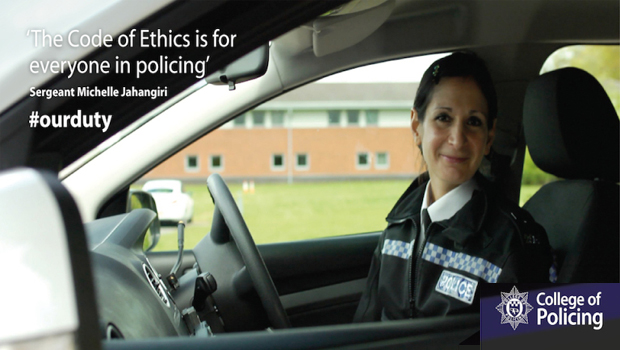