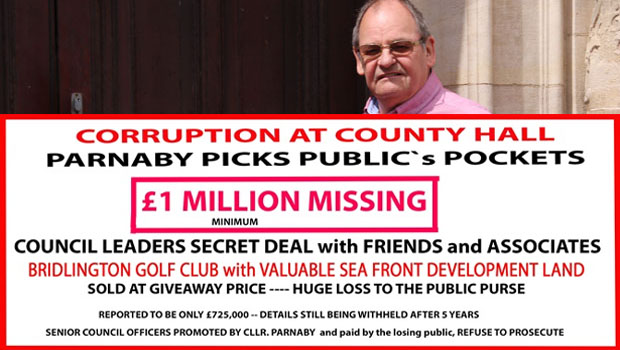 On Wednesday 24th April 2019, at a time when the East Riding of Yorkshire and Scarborough Borough Conservative Groups stand in utter disarray, retired Cottingham developer Mr Peter ROBINSON – well known to regular readers for his courageous and sustained attempt to call to account outgoing East Riding of Yorkshire Council Leader, Councillor Stephen PARNABY [Con.] and his Director of Planning & Economic Regeneration, Mr Alan MENZIES – published an ULTIMATUM under the above banner.

It is understood that Mr ROBINSON’s ULTIMATUM will expire at close-of-play (i.e. 5:00pm) on Wednesday 1st May 2019 – that is to say, on the eve of election day.

Your joint inability to explain either your involvement in this blatantly corrupt, still secret, deal or your lack of any action against those responsible will result in more direct approach to drawing this scandal, and your part in it, to the attention of the general public.

It is now over 12 months since a whistle blower disclosed this 2014 secret deal, during this time an abundance of points have been raised by several sources, so far there has not been a single credible answer to any of these questions. Suspiciously even elected  councillors sitting as members of the Audit Committee, whose role it is to scrutinize, have been refused access to the facts.

I would draw your attention, especially, to the still unanswered questions in my last 3 letters, 10th February, 10th March and 2nd April 2019, copies attached, as summarized in the final paragraph of the 2nd April letter reproduced below:-

If we had given away the golf club FREE OF CHARGE to the members whilst withholding possession of the 16th hole for sale to the highest bidder we would still have at least £1m more for the public purse than Councillor Parnaby`s corrupt deal with his friends and associates.

Now tell the public why he is not being charged, they have a right to know.

The background is succinctly set out in the following Private Eye article:

The following Yorkshire Post article is also of interest: 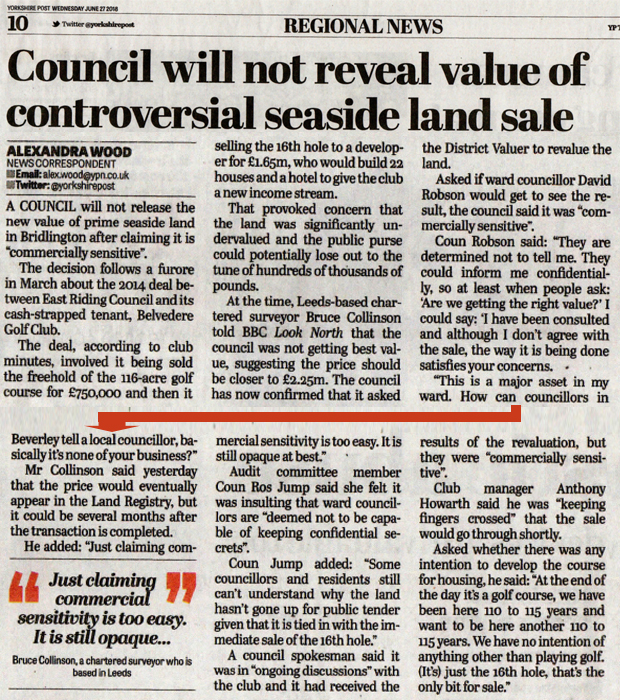