The Enquirer has received a number of Letters to the Editor on the subject of Mr Tom Seston’s inappropriate comments on social media, two of which stand out as reasoned, articulate and thoroughly decent reactions which together encapsulate the intention common to all correspondents.

The first of these Letters to the Editor comes from Tim Hicks, a regular contributor to the Enquirer on policing and crime issues, who maintains that Mr Seston has amply demonstrated his unsuitability for public office.

In my Letter to the Editor “Yorkshire Ripper was not a fantastic lorry driver“, I complained about Conservative Candidate for Hunmanby Ward Mr Tom Seston’s crass and offensive comments about the Yorkshire Ripper. I had hope that Mr Seston would learn from this, settle down and restrain his comments to those which are appropriate for a candidate to be a Councillor in Scarborough – particularly as one of Sutcliffe’s victims may have come from the Scarborough area. (Please see this NYE article on the still unsolved “Nude in the Nettles”  murder at Sutton Bank on the North York Moors.

At the time, Independent SBC Councillor (for Hertford Ward, which will become Hunmanby Ward, due to boundary changes) Councillor Michelle Donohue-Moncrieff observed:

“Peter Sutcliffe was an evil man who preyed on and killed innocent women. I cannot think of any circumstance in which he would be mentioned in a joke. These comments sadly show the real attitude of Tom Seston and the local Conservative party to vulnerable women.”

I was therefore incredulous and shocked that Mr Seston retaliated in the most vicious and insulting way, referring to Councillor Michelle Donohue-Moncrief (Independent Hunmanby) as a psycho bitch in a social media post. NYE report here.

I consider his comments to another candidate in the election (Tim Thorne) telling him to “F*** Off” are also unacceptable and indicative of a foul-mouthed bully.

This is cesspit politics and it is unacceptable.

I am not politically active in any way. If I am anything politically then I am a Harold MacMillan/Ted Heath one nation tory.

There is a certain standard of conduct expected of a Councillor and Mr Seston’s comments demonstrate that he is incapable of meeting it. I do not think he is suitable to be a Councillor for any party.

The second Letter to the Editor is from Hunmanby Independent Councillor Michelle Donohue-Moncrieff, responding directly to Tory candidate Mr Tom Seston’s abusive Twitter comments about her.

At the time of publication, an intransigently unrepentant Mr Seston has not availed himself of opportunities to submit his ‘right of reply’ to reports addressing (i) his ‘Peter Sutcliffe’ indiscretion, (ii) his unseemly reaction to criticim of his election leaflets and (iii) his “psycho ranty bitch” remarks, nor has he published an apology to Councillor Donohue-Moncrieff.

In an age when political correctness seems to be attempting to censor even the most minor of errors, it would be easy to lose sight of why some words are rightly taboo in our society. The use of racist slurs, anti-Semitic, homophobic and Islamophobic abuse rightly shocks most people. However, for the person who belongs to that group the repeated use of a particular word cuts more deeply than those not affected will ever realise.

A few years ago, when Cllr. Mike Cockerill unintentionally used the N-word at a Filey Town Council meeting I saw how a whirlwind of controversy engulfed him. Now for the record, I have a reasonable personal relationship with Cllr. Cockerill. I don’t count myself among those who look for his every mistake. I had heard the phrase in question used repeatedly throughout my childhood. No-one ever said that it referred to people of colour or that it was offensive. I have to admit that I wondered could I end up doing the same thing.

Cockerill had no choice but  to apologise. I remember the then Labour Councillor Subash Sharma standing up and making it clear how the use of that word was so hurtful and damaging. For him, the apology wasn’t enough, Cockerill should have been sacked from Cabinet.

I have to admit that I realise now that I hadn’t fully understood why the use of the N-word should have resulted in Cockerill being dismissed. On reflection, this is a word that degrades and dehumanises an individual. It is abuse that must feel like a stake through the heart to the people it targets.

Now, over the years I have heard some colourful language referring to my Irish Nationality. Then of course, I became a Conservative candidate which moves a person into a whole new league of abuse. I have knocked on doors wondering exactly what response I would receive. It is tough, sometimes even more so when you live in the same village as the abuser. That is democracy; don’t put up for election if you can’t take it.

I hope you can see that I am not a snowflake who wilts at any insult hurled at me. I think it fair to say I can give as good as I get. Yet, on Wednesday, in response to a harmless photoon published by NYE featuring a photograph from his election leaflet, my Conservative opponent responded by describing another article written by myself for NYE using the phrase “psycho bitchy rant”.

Be in no doubt, this was no accidental use of words. Many readers will know I have had mental health issues. My opponent also knows this. You may not be aware that my condition is covered by the Equality Act 2010 which includes mental health disability as a protected characteristic. The law recognises that people like me are subjected to abuse because of their illness. Some would argue that the comment by my opponent is in breach of that Act of Parliament.

In the last few years, one word that is consistently used by people wanting to demean me is “psycho”. Those that use it actually think they are being funny. Let me tell you, that being made feel worthless and a joke for being ill has a major impact on your self-esteem.

The use of the “psycho bitchy rant” phrase is part of the well-used tactic to dismiss a person who might have a valid point solely because of their disability. It had a purpose which goes well beyond the rough and tumble of normal political discourse. It was an attempt to dehumanise an opposing candidate. As my opponent seeks to demean and humiliate me in public, I will no longer refer to him by his name; he does not deserve even that simple respect.

Now it says something when a mild bit of leg pulling by NYE produced this vicious, bigoted outburst. What exactly does he think I have endured at the hands of Conservatives over the last three years? How would he have coped?

Why is it that when I was seriously ill, I was held to higher standards by the Conservative party than this individual?

Indeed, his running mate Cllr. Godfrey Allanson was part of the team that had me suspended from the Conservative Group on World Mental Health Day. Are you beginning to notice a theme? Why are the Conservatives so silent now? Where is party discipline for candidates who behave in such a reprehensible manner? I am sure Scarborough and Whitby Conservative Association will want to respond.

For those wondering why would anyone in my situation run again; it is very simple. When I became ill and was abandoning by my so-called friends in the Conservative Party, it was residents who stepped in to help me. Many hadn’t even voted for me: quite simply, they were concerned as I was very clearly ill. Then, slowly, as time moved forward, residents would come and share their struggle with mental health issues. Many revealed intimate details about how they were trying to survive from day-to-day. They believed that my treatment by Scarborough Borough Council and our local Conservatives in effect told them that they too didn’t count. They were somehow less than other residents. They too would be fair game for abuse had they been in the same situation.

More interestingly, many of those people normally vote Conservative. Not this time. They just won’t vote a Party that has behaved like that. I was approached by a gentleman on Sunday morning who thanked me for mentioning in my election leaflet that I was going to train as a ‘Time to Talk’ champion about mental health. He was so pleased because, as he said, others are so uncomfortable talking about the issue. So the question for my opponent: why would that resident want to be represented by someone who might use derogatory comments like “psycho”?

The electoral register doesn’t discriminate between “psycho” and “non psycho” voters. Next Thursday they may well want to express their feelings through the ballot box. 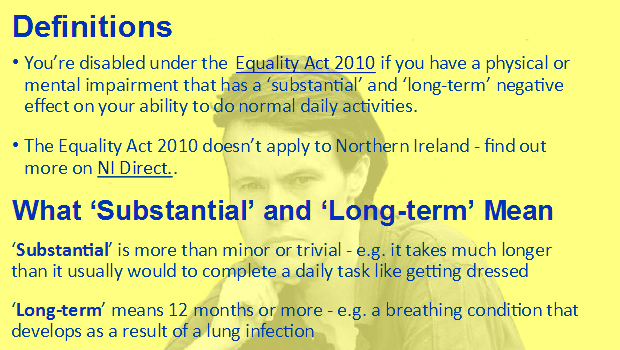 Definition of Disability Under the Equality Act 2010.